For somebody I made a PCB with switches and SMD LEDs (he really wanted SMD LEDs). I therefor went for a design using 1206 red SMD LEDs. 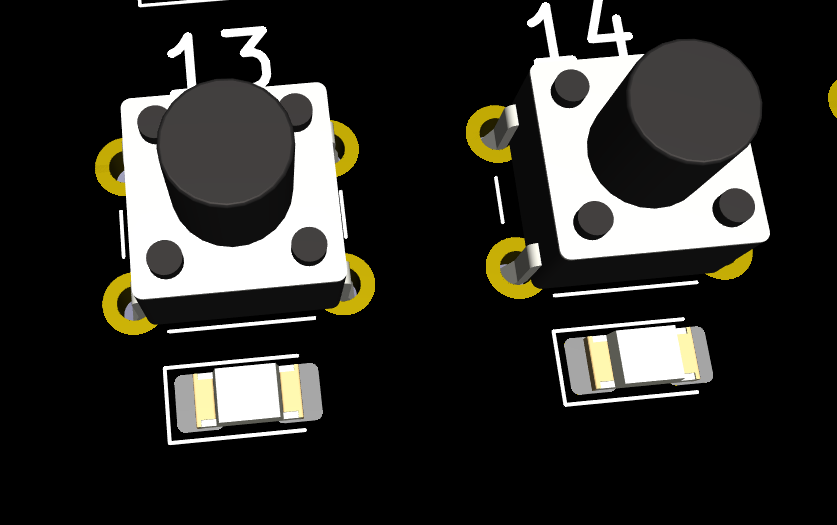 A coworker told me to use much higher resistors in the order of 10k because the SMD LEDs are significantly more 'laser like' than my usual diffused THT LEDs. I understand the the emitted light has a smaller radiant angle and the beam is simply more focused.

This control panel does not have to illuminate a room, nor hurt anybody's eyes by looking at it.

The LEDs are just to be noticed when they are turned on. I do not possess any SMD LEDs at this time. Otherwise I would be testing several resistor values by now.

Is what my coworker said true and should I use much much higher resistor values? What current values are in this case typically recommended?

Has nothing to do with thru-hole vs SMD. I don't know why you think that since you said so yourself that your coworker explained to you the issue was between clear vs diffused and you explained the issue properly.

Normally, I would say this is not answerable and to use the datasheet. However, I do sympathize here because the datasheet lists maximum currents, not minimum. I have also run into the same problem: Clear LEDs also hurt my eyes and I have stuff at work made both by me and others with post it notes over the LEDs. Why did I not use frosted scotch tape to diffuse the light? Because it was still too bright. I really hate clear LEDs. I only buy diffused ones for use as indicators.

Aim for 0.5mA. Definitely stay under 1mA. 5mA is what I would call blindingly bright for some clear LEDs, even from 10 feet away. Even with diffused LEDs, it shouldn't look dim at all.

If I understood what your colleague said correctly, they worry about clear (colourless) lens LEDs. It's true that, for any optoelectronic device, a clear package would be more eye-catching due to the lack of filtering, and common SMD LEDs come with clear package.

Compared to SMD LEDs, THT LEDs may look more eye-friendly because common (e.g. 5mm) ones have a diffused package. Of course there are clear LEDs in THT package and they can be really disturbing.

Same thing applies to SMD LEDs as well: The lens can be clear or diffused. Common signal LEDs (which are generally used as indicators) come with clear package. So they can be quite eye-catching and sometimes disturbing even with low drive currents. But in practice, they are generally used (or they are meant to be used) with external filters or diffusers. For example, the older mobile phones such as Nokia 5210 have a keypad backlight which consists of a few signal LEDs only. But the backlight LEDs are really disturbing when the outer case or the keypad is removed. The keypad (its diffusing material, to be more specific) makes the light homogeneous and therefore eye-friendly.

So, in conclusion, it's not about the LED being SMD or THT. It's about the lens and package.

1
Are SMD microcontrollers less affected by noise than DIPs?
2
SMD Elements on the back of THT
0
Using less than 10 LEDs on LM3914
0
Zener diode question in simple LED circuit with anti-flicker for model railroad
0
NPN and PNP to drive LEDs
0
LT3966 LED driver design
0
Assembled PCB not working. Any ideas?