I have the following schematic. This is a NE555 with voltage controlled by a 12 V voltage reference (TL431) providing a PWM of around 10 kHz at a 90 % duty cycle. The PWM then powers the gate of an NMOS (IRFZ44N), allowing current to pass through it.

This is my simulated circuit:

This is my simulated results between M1 and R4:

These are my actual results:

My understanding is that NMOSes may have issues with high-speed switching, but if that was the case this should be true for both rising-edge and falling-edge. Also, the listed rise/fall time for my NMOS is 60 ns.

I am unsure what may be causing the attenuation every time the PWM increases. Please let me know if more information is required to solve this issue, I am still relatively new to this.

The only thing that can lift the voltage at the drain of the MOSFET is a 1 MΩ resistor connected up to 24 volts and, in lifting that voltage, it has to charge the drain-source capacitance of the MOSFET. 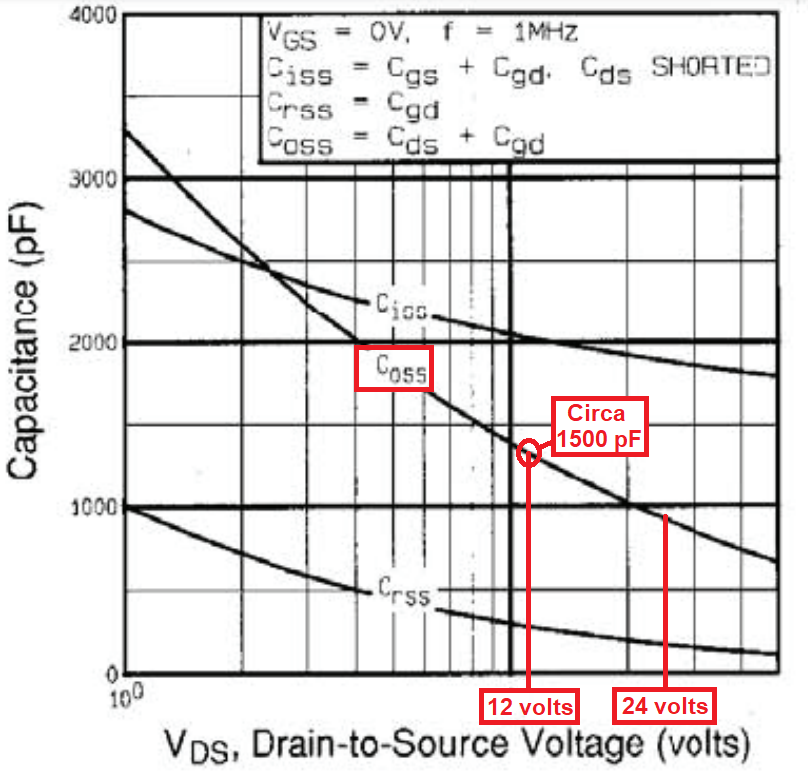 Hence I'm not surprised to see such a sluggish rise-time. Basically, to reach 24 volts it will take around 5 time constants or about 7.5 ms.

The first problem is an NMOS model was used, but not the IRFZ44. The spice model is located here

Another problem is the IRFZ44 is a high power fet, and there is a 1MegΩ resistor connected to it so it's going to be hard to predict what the resistance of the fet will be for the Vgs you are driving it with (5V from the 555 timer).

I'd probably pick a different fet or change the resistor to value to support more current.

What you are seeing here is the intrinsic capacitance of the device (Coss) exposed because of the very small current in the output due to the large load resistor.

For a power MOSFET device this capacitance is in hundreds of picoFarads. For the IRF44, the datasheet you link gives 360pF.

For detail information I have linked this document that will help you, but a simple explanation follows.

Imagine a 300pF capacitor connected in place of the drain-source of the FET.

At Tzero the capacitor would have zero voltage and would need to charge through the 1M resistor to the value of V2. This would follow the following formula

In reality there are other capacitances and effects you need to consider (see the linked doc) but the one I describe is responsible for most of what you see.