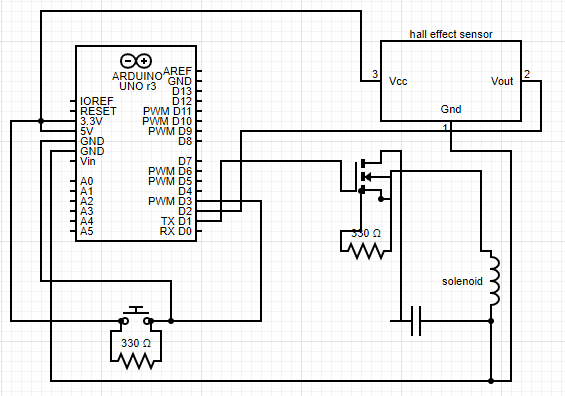 I am attempting to create an electromagnetic paper airplane launcher. I am using a hall effect sensor to detect when a sled is passing a solenoid. I am using an Arduino Uno as my microcontroller so that once the hall effect sensor detects a magnetic field, an output voltage would be supplied to the gate pin on a logic-level n channel MOSFET.

As a safety feature, I have added a push-button. In my Arduino code, I am only allowing for the MOSFET to receive an input voltage once the button is being pressed and the hall effect sensor reads a magnetic field.

I tested everything today and found that current will be supplied to the solenoids as intended, but it will also be supplied when a magnetic field is present without having the button pressed.

I am not sure if this is a coding problem or not. Before hooking the solenoid to the mosfet, I used an led in place of it in order to see if anything was being sent through the MOSFET. When I used the LED, it worked as intended--only turning on when a magnetic field was present and the button was pressed down.

I was just wondering if anyone knew what might be happening when I changed the LED with a copper wire solenoid.