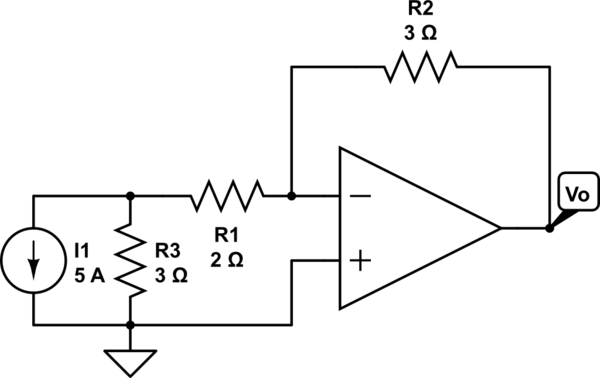 Could anyone offer some insight on how to solve this circuit? What I've been doing so far, is only producing a wrong answer... I've been getting that V_A = 15 (which is wrong). Also I think V+ is = 0 since the node below 3 ohm is grounded... Any help on how to start solving this?

You can solve this by pretending that the op-amp is not there, and then solving the remaining network of resistors and current source by finding the value of \$V_o\$ which is necessary for the junction between the \$3\Omega\$ and \$2\Omega\$ resistors to be at zero volts.

The easiest way to do this is to pretend that the junction is actually grounded (not simply at 0V potential). Determine how much current is dumped into that ground through the \$2\Omega\$ resistor. But then, recognize that there is no ground there and so the current flowing toward that node actually returns via the \$3\Omega\$ feedback resistor.

The current across the feedback resistor gives you a straightforward way to determine the voltage across that resistor, which directly determines \$V_o\$.

Look at the current source and resistor accross it. Can you convert that to something more directly usable? Hint: If you get stuck look up what Thevenin and Norton had to say.

Once you have done the substitution above, you have a basic inverting amplifier. That should be solvable just from inspection at that point. If you are still stuck there, show the updated circuit (with junction dots and component designators) and we can discuss more from there.

Convert the current source to voltage source as shown below. Now it's a inverting amplifier. 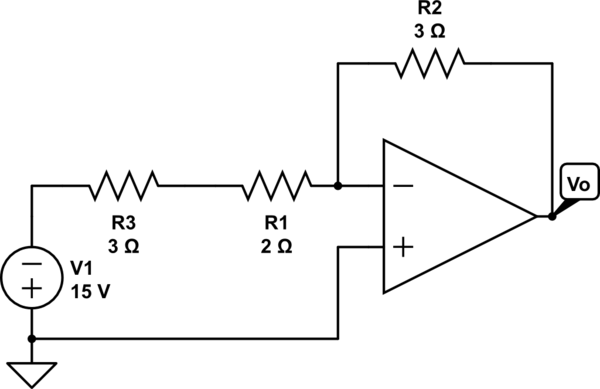 The solution is here:

So the answer is +9V

You can also aply a current divider.

You can find the current just analysing this circuit: 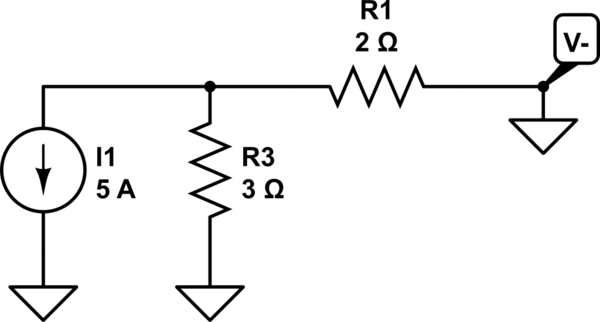 Then, Vo will be:

6
Solving this op-amp circuit
3
Solving an Op-amp circuit
0
Op-amp voltage divider
0
Calculating gain of simple op-amp using KCL
2
Transfer Function of Inverting Ideal OP AMP with Parallel Combination T feedback network
0
OP Amp-Difference amplifier
0
Q: How to use circuit analysis on a circuit ideal diodes with ideal op-amps
0
Find Vo of an op-amp circuit
3
LP324N op-amp amplification - why does one circuit work over another?
1
Why is \$V_a=-V_b\$ in this op-amp?