Im trying to wire 4 3v LEDs in series, I tested one light to make sure it worked with a standard 9v battery. It lit for a second then dimmed out. Did I burn out the light, or is the battery not right for it? If anyone could help with what size battery I should use that would be great.

To start, yes, that LED is definitely burned out. If an LED is listed for a specific voltage, that means it will typically "drop" that much voltage at some listed current - typically 20 mA. So if 20 mA are passed through the LED, it will "drop" 3 V. The current to voltage ratio is usually directly related: as one goes up or down, the other goes up or down.

For a 9 V battery with virtually no resistance, the LED current would have been very high. To use the LEDs without a resistor, you connect all 3 in parallel across 3 V (a 3.3 V coin cell battery, or 2xAA batteries in series). Any higher voltage will burn the LEDs out. Any lower and they probably won't light up. Similarily, you could probably get away with connecting 3 LEDs in series across a 9V battery, but I wouldn't recommend it. Also, if you burn out an LED, don't breathe in the fumes from it. LEDs have some pretty nasty chemicals inside of them that aren't meant for inhalation.

In general, the more current through an LED, the higher its voltage drop will be, and the brighter the LED will shine. However, each LED has a maximum voltage and current rating. An LED has almost no internal resistance, so connecting it directly to a battery will put the full battery voltage through the LED. It will shine very brightly for a second, then overheat from the high current draw and burn out. Had you placed a resistor greater than 200 ohms in series with the LED it would have been fine: \$\dfrac{9\,\mathrm{V} - V_{LED}}{200\Omega}\$ = LED Current... \$\dfrac{6\,\mathrm{V}}{200\Omega} = 30\,\mathrm{mA}\$.

As far as arranging the LEDs, you can do it in many ways. To do it in series: 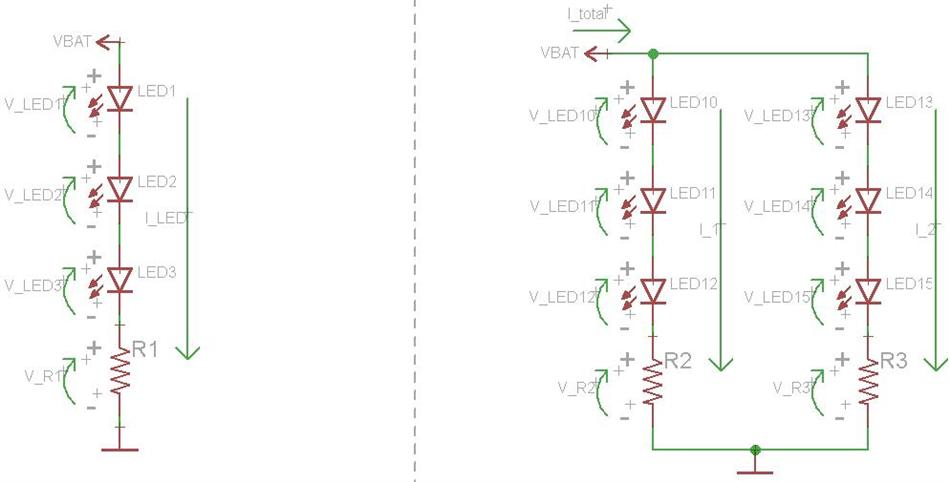 When things are in series, then share a current but have individual voltages. On the left are 3 LEDs in series with a series resistor. Since they are in series, they will "share" a current, meaning the same number of amps will pass through everything. However, each component will have its own voltage drop. Similar rated LEDs will not typically have identical voltages, so while LED1 may drop 3 V, LED2 may drop 3.2 V and LED3 may drop 2.8 V. In this case, the resistor (R1) will "limit" the current through the LEDs by dropping whatever voltage is left over. The battery voltage is given by the following equation:

On the right are 2 parallel banks of 3 series LEDs, each with its own series resistor. All of the calculation are the same in this circuit as they were in the first. The only additional thing to note is that the total voltage across the left string will be equal to the total voltage across the right string because the strings are in parallel. However, the current through each string could be different, depending on the chosen series resistance in each string. The total current flowing from the battery is equal to the two string currents added together.

To do it in parallel:

When things are in parallel, they share a voltage but have individual currents. The circuit to the left is common, but not very smart. The 3 LEDs are in parallel and share a single series resistor. In this manner, the LEDs are "forced" to have identical voltage drops. A lower source voltage is necessary here. The total current is still set by the single resistor, similar to the above circuits. This total current is equal to the sum of the three LED currents. For example, with a 6 V battery, 3 V LED (on average), and a 1000 ohm resistor, the LED current would be \$\dfrac{6\,\mathrm{V} - 3\,\mathrm{V}}{1000\Omega} = 1\,\mathrm{mA}\$. The circuit is really only a bad idea if you are operating the LEDs near their max current. Since the LEDs won't draw identical currents at the same voltage (each one is a little bit different) then one may burn out, causing the current through the other two to immediately go up since they share the current limiting resistor. This will likely cause the other LEDs to burn out as well.

On the right is the best way to do this, with each LED having its own series resistor. In this way, the current through each LED can be controlled, and each LED will continue working if any of the other ones burn out. \$I_{LED} = V_R / R\$. Each LED and resistor combination will have a total voltage drop equal to each other LED and resistor combination, but each LED can have a different current, depending upon the size of the resistor.

A switch can be placed between either battery terminal and the LEDs.

That one is dead. LEDs need a resistor in series to protect from excessively high currents: since LEDs present virtually no resistance to current, the allow very high currents across them, which is not good for their health. Some batteries cannot source enough current to burn out some LEDs (for instance those "torch" types are OK with 2xAAA batteries), though the details depend both on the battery and the LED.

Also, when you say a 3V LED you probably mean a LED with a 3V forward voltage drop. This is not the most important characteristic: what you really need to know is how much current the LED can take. For most small LEDs it is about 20mA-25mA.

So to know what kind of battery you need you need to know:

Then you can calculate the battery size. For most LEDs, at least a 3V battery set (such as 2xAA) is sufficient to drive the LEDs, but again, you may need current-limiting resistors depending on the LEDs and the battery.

Not the answer you're looking for? Browse other questions tagged led batteries or ask your own question.

8
How to know how many LEDs can be used at a given voltage
8
Replacing incandescent bulbs with LEDs, unexpected behavior
0
9v battery to parallel 3v LEDs - burnout
0
Wiring 3v 20ma LEDs
0
Make an LED (20 LEDs) circuit battery efficient
1
Noob question: blinking leds with pn2222A and 9v battery
0
What battery size/type should I use (and wiring tips for LEDs?)
0
LEDs in series without resistor