I've made a joule thief, and it works fairly well, but not as well as I would like. 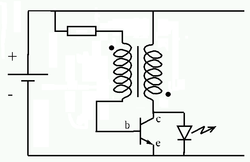 It's powering a 3.2v LED from a 1.2v battery, but it's very dim. I'm hoping increasing the voltage from the JT will improve it, but I'm not sure how to increase the duty cycle of the transistor. In fact, I'm not actually sure what's making the transistor turn OFF - apparently the toroid core saturates and somehow switches it off, but I don't really understand WHY that would happen.

I've also tried the "supercharged" version that's apparently almost 30% more efficient, but the only difference seems to be that the LED is dimmer. 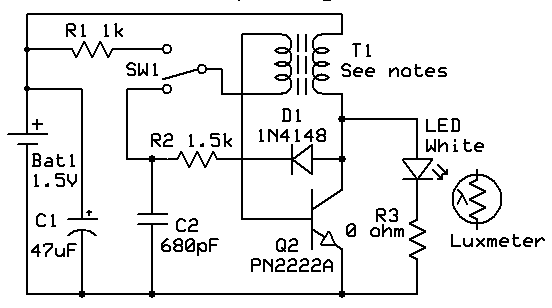 This one's a year old, but I'll necro it because I think I can say something useful.

Joule Thief circuits got a bad rap some time ago because some people in the over-unity, free-energy crowd went nuts over it, so lots of people won't really spend any time talking about it. Turns out, you still can't get something for nothing. So, moving on.

Pretend for a moment, the battery in the moment isn't connected. No current, no voltage anywhere else in the circuit. That's our starting point.

When the battery is first connected, the only path for current to really flow is into the base of the transistor. As the transistor gets biased, the current from the collector to the emitter will rapidly increase as a multiple of the current flowing into the base, depending on the exact transistor used. The increasing current will start to store energy in the secondary winding, just like any other inductor.

What happens next is a little bit hard to explain. The easiest way to explain it is to follow those dots. The current that is now flowing from top to bottom on both sides of the transformer generates opposite polarities of voltage from each other. And the current on the right side is higher, thanks to the transistors amplifier action. So the coil on the left gets a voltage boost from the coil on the right, and this boost opposes the tiny current that flows into the base of the transistor, shutting it down.

Well, the current in the right hand coil can't exactly just stop; it stored energy in the mutual magnetic field that has to go somewhere. As that field begins to collapse from lack of anything sustaining it, it starts to push at higher and higher voltages. Eventually, this voltage gets high enough to forward bias that LED, and the right hand coil completes its discharge cycle while the LED emits light.

The Joule Thief is not magic, it works the exact same way as any other boost converter. It just so happens to be a very clever use of mutual inductance to set up an oscillating switch to create the inductive kick, so that it can work from extremely low voltage sources.

So, there are only three real things to change - the transformer, the transistor, and the LED. Some LEDs are fairly dim by design, even when properly supplied. Assuming this isn't the problem, that leaves the transistor and the toroid.

Without doing the math, I'd say its safe to say you want a transistor with a fairly high beta value (the ratio of Collector current to base current) that can handle quite a bit of current.

The websites posted in the comments are pretty accurate. You need as few coils as possible around a reasonably sized toroid to store the most energy possible in a very short time. Don't forget that 1 volt across a very low resistance wire can still make for a significant amount of current, so don't use itty bitty magnet wire. The other feedback coil (left hand) can be relatively wimpy, in comparison - transistor base current through that resistor should be on the order of microamps.

LEDs would get dim in these circuits in the primary winding had way too much inductance, the transistor was relatively high in on-state resistance, or, quite possibly, from not having the coils wound in opposition to each other - the LED might find just enough juice from the battery to bias weakly, and the feedback path would simply hold the transistor in a hard-off reverse biased state.

Not the answer you're looking for? Browse other questions tagged led voltage inductor boost duty-cycle or ask your own question.