Doubts related to the Arduino Ethernet with PoE

I implemeted a system by using the Arduino Uno and the Ethernet Shield without PoE. Now, I am thinking to use the Ethernet with PoE but I have following doubts, even if I read the Official Documentation:

Arduino board, or Arduino shield?

Yes, the "Arduino Ethernet board WITH PoE" is a stand-alone Arduino board, not a shield. You don't need another Arduino board to fully use it.

The "Arduino Ethernet board WITHOUT PoE" is an Arduino board with all the parts of:

all crammed together on one board.

Yes, as is explicitly stated on the page you linked, "any FTDI-style USB-to-serial connector can be used to program it.". The main documentation page for the Arduino Ethernet board also mentions that "The 6-pin serial programming header is compatible with the USB Serial adapter and also with the FTDI USB cables or with Sparkfun and Adafruit FTDI-style basic USB-to-serial breakout boards."

That includes the "USB 2 Serial Converter" (a) (b), or the Mini USB Adapter , or the FTDI Basic Breakout - 5V, or the FTDI Cable 5V, or the FTDI Friend, or etc. Any of them work identically and can be used to program the Arduino Ethernet board and most other Arduino boards that don't already have an on-board USB to serial converter.

How does the Ethernet with PoE get power?

The Wikipedia Power over Ethernet article describes some of the more popular ways to send power through an Ethernet cable. A PoE injector is a device that pushes power into the Ethernet cable at one end. A "Alternative A" injector sends power over the same two pairs of wires used to send data. A "Alternative B" injector sends power over the other "spare" two pairs of wires that are not used to send data. A PoE splitter is a device that pulls the power out of the Ethernet cable at the other end.

In the terminology of that article, the Arduino Ethernet board WITH PoE is a "Powered device" that combines a (data) Ethernet endpoint and a (power sink) PoE splitter in one device -- you don't need a separate PoE splitter.

You do not need a PoE splitter -- such as "the silver and black box in the middle" of this photo -- in order to separate the power from the data at the Arduino end of the Ethernet cable. All the functionality of that splitter is already built-in to the "Arduino Ethernet board WITH PoE".

As far as I can tell, the PoE module on all the "Arduino Ethernet board WITH PoE" and all the "Arduino Ethernet Shield WITH PoE" are the Ag9120-S PoE Module (a), (b), (c). According to datasheet for the Ag9120-S PoE module, it is IEEE802.3af compliant, and therefore supports both "Alternative A" and "Alternative B" injectors. The datasheet also recommends a minimum of 36 V at the jack.

So if you have an Ethernet switch that already has a built-in PoE injector, you should be able to plug a standard Ethernet cable into the switch and the other end into the "Arduino Ethernet board WITH PoE", and it should Just Work, with power and data transferred over that single Ethernet cable.

If your Ethernet switch does not already have a built-in PoE injector, there are a variety of midspan injectors that would work. (a), (b), (c), (d), (e), etc. Any standard 802.3af-compliant or 802.3at-compliant injector will work with it. Also, there are many non-standard "passive PoE" that will usually work with it.

If you are willing to use non-standard PoE, one very low-cost choice is: Buy the The Adafruit Passive PoE Injector Cable Set (a non-standard "passive PoE" system), throw away the "splitter" half of the set, plug the "injector" half of the set into your switch and to a 48 VDC power supply (or at least in the 44.0 V to 57.0 V range), and then plug the Ethernet cable (which leads to the Arduino) into the other side of that injector. (Using a 12 V power supply won't hurt anything, but it's apparently not enough to turn on a standard PoE endpoint).

On the other hand, if you are willing to use non-standard PoE, you can save even more money by using "Arduino Ethernet WITHOUT PoE" (instead of the more expensive "Arduino Ethernet board WITH PoE"), with a "Adafruit Passive PoE Injector Cable Set", with the "injector" half connected as previously described at the switch end of the Ethernet cable, and the "splitter" half of of the set connected at the Arduino end, as shown on its web page. However, in this case you use something like a 12 VDC a power supply (or at least in the range of 7V to 20V). (Alas, using a 48 V power supply with this configuration probably will permanently damage the Arduino boards).

1: The "Ethernet with POE" is the Arduino UNO with built-in ethernet and sd card, and the POE module. Does not have a usb to serial built in, so would need a serial adaptor to program.

There is also the Ethernet without POE, which is the same, but without the POE module.

Then there is the Ethernet Shield without POE, which plugs into a regular Arduino Uno.

The POE module is a Ag9000-S, a third party product that Arduino (the company) uses for POE. Datasheet here. It is a proper POE module, requires 36v to 57v In.

3: As mentioned about, the Arduino Ethernet does not have a usb to serial port. You would need that convertor or similar.

There are multiple ways of doing POE, and it depends on your needs. If you only need 10~20 meters in a home/non-professional way, you could do a simple injector, either home made, or purchased, like http://www.adafruit.com/products/435 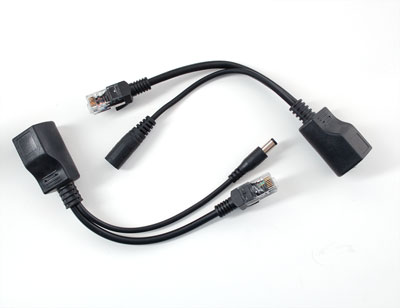 It's not POE compliant, but it doesn't need to be. It is still does what you need though, allowing you to run a single cable instead of two.

Not the answer you're looking for? Browse other questions tagged arduino power ethernet buying poe or ask your own question.

10
Easiest and Best PoE Ethernet Chip/Micro/Design for DIY Interface with Custom Arduino Board (AVR Solution)
3
Why is my Arduino Ethernet shield getting hot?
1
Arduino with FTDI cable - USB port error
0
What make now that I have implemented a working prototype of my system?
2
Strange I2C behavior: sometime it works, some time it doesn't
7
Ethernet.begin() only works with SD Card removed - why?
7
How to connect RFduino to internet?
5
How to resolve this :Arduino UNO not working with Arduino wifi shield?
4
Problem with Arduino UNO and RC servo
1
Arduino and Ethernet Shield Power Supply