In a previous question, I asked if having 2 coils of wire with electricity flowing from one to the other is RF, and they replied that it was not Radio Frequency. I was puzzled because I thought this was wireless transmission of a changing magnetic field, which thus was RF.

I thought the rate of the AC current oscillation was the frequency of the RF (so a 60 hertz AC input I thought would give me a 60 hertz RF signal). Well, I was told NOT.

There are two reasons why your earlier question wasn't about radio. The first is, that radio officially goes from 3kHz to 300GHz. The second is, that a transformer is based on a different principle than radio waves. That second reason is what's your question is about: a transformer is based on electromagnetism, radio waves are based on electromagnetic radiation.

Understanding on this topic is really hard, and exists for many people on a lot assumptions. I'll try to give an easy explanation for a layman, for which you'll have to accept some more assumptions than for the detailed explanation below.

You can only prove the existence of electromagnetic radiation by transporting waves over more than one wavelength - only then, you can be sure the fields create each other.

There is some confusion here, and the cause of that is that the theoretical principle behind radio waves, and radio frequency, don't necessarily go together. Take a look at the Radio Wikipedia:

Note: I believe the 30kHz minimum should be 3kHz (reference: here and here)

You can see that there might be other waves, based on the same principle and working the same way, with a frequency <3kHz or >300GHz, that are just therefore not part of "Radio". Those waves aren't radio waves and they aren't in the RF spectrum, but they are just the same, when you forget about the frequency.

From the Electromagnetic radiation Wikipedia:

What we were trying to do in your earlier question was really just picking up the weak magnetic field, because that's what a secondary coil does.

... the electric and magnetic fields in EMR1 exist in a constant ratio of strengths to each other, and also to be found in phase ...

Think about the transformer. A magnetic field is generated when the current changes. Let's say we have a pure sine as the current, \$I(t)=sin(t)\cdot{}c\$. We can get the change of the current on a specific moment by taking the derivative of that sinus, which is the cosine, so: \$B(t)=cos(t)\cdot{}c\$. Now have a look at the functions \$I(t)\$ and \$B(t)\$, which should exist in "a constant ratio of strengths to each other" and in phase.

Note: the constant \$c\$ is because the formulas depend on other things as well, that are irrelevant now and constant in a specific situation

You can already see those functions aren't in phase. They aren't in a constant ratio to each other either. You can see that by plotting \$f(t)=\frac{sin(t)}{cos(t)}=tan(t)\$:

So no, a transformer does not radiate electromagnetic radiation. The waves aren't in a constant ratio of strength to each other, neither are they in phase. The tests you did with a transformer in your earlier question, were just based on a magnetic field.

There are two main reasons why your experiments weren't about radio. The first is that it just was the wrong frequency. The second is that a coil with an AC current does not provide electromagnetic radiation.

50/60Hz transformer coupling is not RF because it works by reactive field coupling in what is known as the "near field". Here's a picture from wikipedia on near and far fields: - 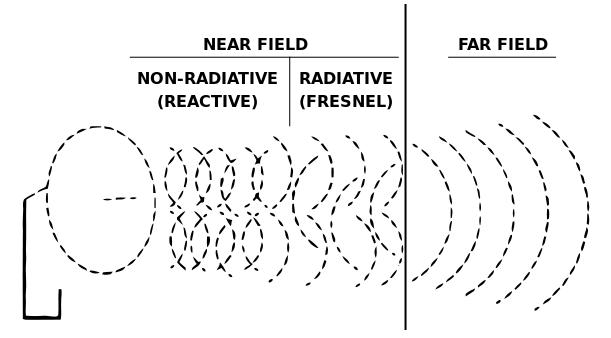 At about the wavelength of the antenna (or the frequency you are using to couple energy) the near field becomes the far field. The far field is regarded as "proper RF" and is able to propogate with it's radiation decreasing as the square of the distance.

I think you already largely get it from your last sentence. A changing magentic field is not the same as radio.

Real radio is propagating energy. You can think of the energy as tied up in a specific dance between the E (electric) field and the B (magnetic) field. The two together oscillating in the right way cause the energy to propagate at the speed of light thru free space. Visible light is one example of this. It is a tiny part of the larger spectrum that goes down to (but not at) DC and up past gamma rays and cosmic rays. Common AM radio is at around 1 MHz, which has 300 meter wavelength. Common FM about 100 times higher frequency and therefore 100 times shorter wavelength, so 100 MHz and 3 meters. WiFi operates at about 2.4 GHz, which is 125 mm wavelength. There are microwaves of a few 10s of mm wavelength, the "terahertz" radiation used at airports to look under your clothes, infrared, visible light (roughly 500 nm), ultraviolet, xrays, gamma rays, and on. All these are exactly the same thing except for the frequency of oscillation. Since they all travel at the same speed of light in free space, you can also characterize them by their wavelength.

The E and B fields can each support non-propagating fields too. Wrap some wire around a steel bolt or ferrite rod, turn on the current, and you have a magnetic field. Ferromagnetic materials, like steel, will be attracted to this electromagnet. However, note that the energy of this field isn't being sent anywhere. The field exists around the electromagnet, and falls off rapidly with distance. You can even vary the field over time by driving the electromagnet with AC current, and then have another nearby electromagnet work in reverse to make a electric signal in its wires from the changing magnetic field. In fact, this is the basis for how transformers work. Yes, you can transfer signals and even significant power this way, but it is not radio. For example, there is no way to arrange a bunch of electromagnets to cause a beam of B field disturbance to be radiated in a particular direcation. You can shape the field locally, and the field does in theory extend to inifinity at the speed of light, but its not the same as sending a radio wave (or light beam, or radar beam, etc).

Just like you can make a B field device, you can also create static electric fields. As with the magnetic field from the electromagnet, this electric field can be detected locally and significant power transferred at close distances. But again, the energy of that field isn't being "sent" anywhere. To have the energy really radiate on its own requires just the right interaction between the B and E fields that we call electromagnetic radiation. We often get a little sloppy and refer to anything radio as "RF". RF really stands for radio frequency, but often we use it to just mean radio of any kind.

Radio frequency (RF) is a rate of oscillation in the range of about 3 kHz to 300 GHz, which corresponds to the frequency of radio waves, and the alternating currents which carry radio signals.

The fact is that electromagnetic radiation can occur at any frequency, e.g., the ELF spectrum is from 3 Hz to 300 Hz, but EM radiation is not necessarily RF.

Not the answer you're looking for? Browse other questions tagged rf electromagnetism or ask your own question.

104
Measuring feline capacitance
11
Are E and B fields in phase in electromagnetic radiation?
8
Is this Radio Frequency and will it work?

1
Can the coil in a magnetic field be replaced by a copper mesh?
11
Are E and B fields in phase in electromagnetic radiation?
1
How is the current induced in this circuit?
0
Can we make a simple wireless device by mutual induction phenomenon
1
How did Hertz prove existence of radio waves?
1
Discharging a capacitor quicker, using an exterior time varying magnetic field?
3
Can an induction motor be used to generate power?
0
How does the shield of a coaxial cable work?