Is it possible to use just a capacitor to debounce a button?

I have been wondering: why cannot you just hook up a capacitor to a button to debounce it? I have been figuring out how to reduce the work my microprocessor has to do, but I have very limited space on a PCB I am designing, so I don't want to do a full-blown debounce circuit which would complicate the design.

That's a example circuit; sorry for any errors (I am not good at designing circuits with capacitors). Would this even work? For the tack switch, I couldn't find one that matches what it is in real life, but it works for this situation. The button is like the one found here. D10 stands for Digital Pin 10, but it doesn't matter; it just means the Arduino input. I also don't know how big of capacitor I would need, so if this circuit works, what size do I need?

Again, I am just trying to simplify this to make it easier to build while not having to do software debouncing. From looking at how capacitors work, this seems like it would work, but also it might make the button press longer/delay it if the capacitance is too big. They are commonly used for "smoothing" out noise in power supplies, so isn't this a similar thing where it "smooths" out the bouncing? Any circuit modifications to make it work (if needed) would also be appreciated.

It depends on what the default state of the switch is. A capacitor will only charge when you give it a positive voltage. Usually, in an embedded environment, we use a pull-up to give a pin a default high state, and link the switch to ground. Adding a capacitor won't help here, because it won't "store" the ground state.

However, you can also use a pull-down. This would mean the pin is by default low. Making it high by pressing the switch, will charge the capacitor. After releasing, the capacitor will keep the pin high for a little while, so yes, this would work. I'm not sure if 1uF is enough, too little or too much, I'd recommend you to look with a scope and try it out a bit.

I think the accepted answer said that you can only use an RC trick to de-bounce a switch that is tied to low, but I think that is not true. You can do it for high as well. Here is the schematics. There is a veritable de-bouncing Bible that recommended the following schematics: 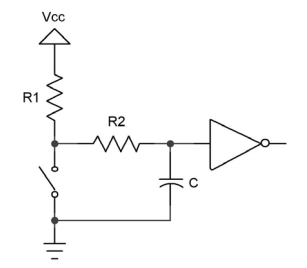 When C is fully charged and you actuate the switch, the charge will drain through R2, hopefully until the switch has settled before you reach the logic low level on the input.

When C is fully discharged, and you open the switch, then C will charge through R1+R2 until logic high level is reached.

Since normal TTL logic high level at 2V is relatively low compared to logic low 0.8V level, it makes sense that R1+R2 will make the charge time longer than the discharge time only through R2.

Using a Schmitt-trigger input would push logic high to 4V (which some sources might not even hit reliably, but a switch would).

I will try this out now on my breadboard and (analog) scope. Hope I can see the bounces on channel 1 to trigger, and hope I can see it without it being a storage scope. But I can also use an 74LS161 4 bit counter to catch bounces. And lo and behold I have both the 74LS04 TTL hex inverter and 74LS14 Schmitt-trigger hex inverter on hand to play with.

Since I have no digital storage oscilloscope I could not use that at all. Instead I used a 74LS161 counter with 4 LEDs and I just make sure that each actuation of the switch counts exactly one increment.

I can clearly see the bouncyness of the switch. So, base line is positive, meaning I will be able to tell when my counter-measures will be effective.

I could not find a combination of R1, R2, and C that would work when I have a normal TTL input on the 74LS04. However, with a Schmitt trigger input of the 74LS14 I have a fairly good setup when R1 and R2 are both 1 kΩ and C = 1 μF or better even 4.7 μF. It obviously depends on the switch too.

I found some rubber button switches that had an internal resistance too high to they would not lower the input voltage enough. With two moderate quality switches I counted several runs of 16 and I had only a few glitches with 100 nF, 1 μF, and none with 4.7 μF.

With the normal TTL input I could not make it work.

However, if your input is an Arduino, you might want to double-check that in fact it's digital inputs might be Schmitt-triggers, and so you might do OK with R1 and R2 are both 1 kΩ and C = 1 μF and possibly even 100 nF.

Finally, after further frustrating experimentation and research, I conclude that on normal TTL levels it is simply impossible to use the RC method to de-bounce. And it doesn't matter if you tie your switch high or low.

You need a Schmitt trigger to do this. I doubt that even CMOS works.

Here is a short video from TI (they should know) saying that you need the Schmitt trigger inverter here.

And here is an alternative circuit with a Schmitt trigger, which is even more interesting as it doesn't require any capacitor.

The same white paper also offers a solution with two inverters and no resistor or capacitor of any kind, just requires a two position button.

I have tried it and it does not work either in this magic way. It almost works, but I still get double actuation much more often than with the RC 1k/1k/100nF and Schmitt trigger. Also, if I use this double inverter setup with the 74LS14 Schmitt trigger inverter, it doesn't work any better. So it just doesn't work, period.

"so I don't want to do a full-blown debounce circuit which would complicate the design".

I really don't understand why you made it that complicated or think that complicated. You don't mention what kind of MCU you are using however I can see it is an Arduino. You can do it by software input( pin, INPUT_PULLUP ); (so you don't need any external components) or you can use a pullup or pulldown resistor (SMD is really small) of 10K to GND or 5V, it is what you prefer to use.

The only thing you have to do is read a value from the input with a debounce rate in ms, use millis() for this (do not use delay()!) and use it in the loop() function. This is peanuts for every Arduino.

Not the answer you're looking for? Browse other questions tagged capacitor switches button debounce or ask your own question.

34
Debouncing buttons
-4
Push button de-bouncing, nothing works. [Please, only answer if you have actually done it (recently or often enough) to know for sure!]
0
Connecting two motors to one Arduino board