Another weirdly worded question in my digital logic book. It doesn't specifically define set-dominant or reset-dominant - nor does it show how to use these in practice with drawing circuit diagrams. I've read and reread the chapters and it doesn't specify how to do this..

I know that unpredictable behavior happens if S and R inputs are both equal to 1 when the clock changes to a 0. Given a circuit, I'm supposed to create a set dominant gated SR latch in which the conditions S=R=1 causes the latch to be set to 1.

I've included the circuit we're given to start with and my attempt at making it set dominant (don't judge me lol).

To rephrase the question: " how do you change the internal operation so that if S*R = 1 that only one of S or R is exerted"

That means you have to put some extra logic in there to control these signals.

Since this is homework and I don't do other's homework, I'll take you through the thought process.

So that means that you need to block R' signal when S*R = 1. In other words, when S=1 do not allow R' to get to the input of the latch.

I googled "reset dominant sr latch" and your definition:

Given a circuit, I'm supposed to create a set dominant gated SR latch in which the conditions S=R=1 causes the latch to be set to 1.

is basically right. I came up with the definition (rephrasing from what I found online):

(BTW: AFAIK "Set/Reset dominant" is not standard terminology that would be defined in a text book, it's just a made-up name for the purpose of this particular problem.)

When both AND gates are enabled (CLK = 1), the only modification is R' = S̅ R in the top AND gate with S' = S left unchaged in the bottom AND gate. As shown below, the following circuit will convert the given circuit from set/reset neutral to set dominant latch. All we did was feeding an extra S̅ signal through an inverter to the top AND gate. 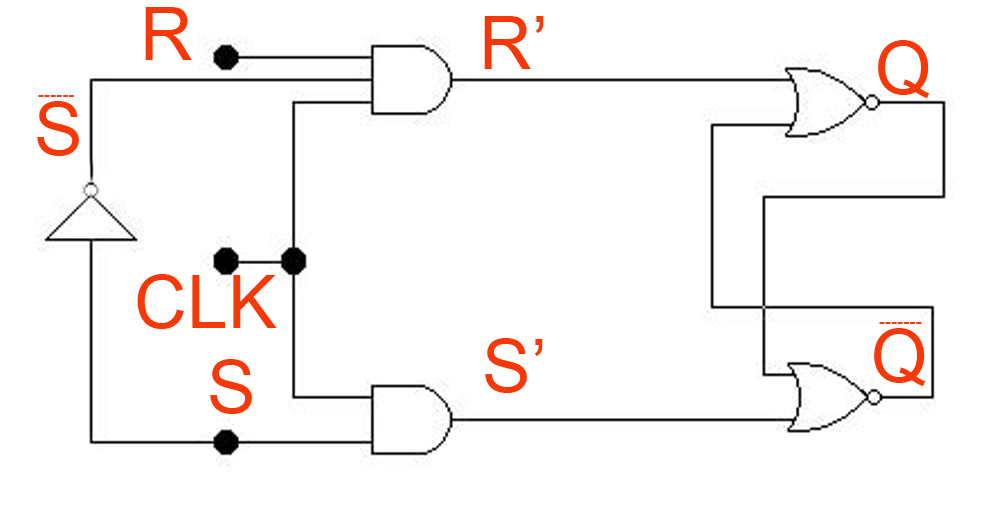 Not the answer you're looking for? Browse other questions tagged digital-logic clock reset latch or ask your own question.

0
How can an SR Flip Flop be made using a D Flip Flop and other Gates?
0
Usage of "safe" gated SR Latch?
4
Shift Registers Controlling Seven-Segment Display without a Latch?
4
A question about how RS latches work and the time an input needs to stay high after it has been supplied!
0
Set latch and Or gates
0
Designing an Over-Current Protection Circuit with Delayed Reset
0
Why is my Gated Latch not a Gated Latch?
1
SR Latch output pin biases state of the logic gate under special circumstance