I know that if I use vias on high speed traces that I need to reduce the inductance effect of the via. So I will put ground vias next to these vias to help returning current. I have seen a picture about using ground vias that has confused me. Here is the first picture:

Everything seems OK on the left one, returning current turns from the reference layer ground. On the right image the vias between the two ground planes seems OK too.

But in this picture: 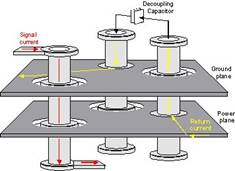 Which I desire to use for my design one layer is ground and one layer is the power plane. When I saw the picture, it uses two vias and a bypass between them. Do I have to use it like this, or any other advice?

This is my understanding, based on very little knowledge:

Oh wait, there is. It's a capacitor!

In fact, this is exactly what the diagram shows in the yellow arrows.

There is a little confusion because there is very little need to try and alter its path to return on the ground-plane so, I think the diagram is showing you that decoupling capacitors can distribute a return signal (coming from power) to being seen on the ground-plane also.

I think you probably need to tell us where the pictures came from and what the article's description was for this last picture.

The capacitance between the power plane and ground plane, due to the parallel surface areas, provides the signal return path. No additional capacitors needed. As long as you have a contiguous ground plane it does not matter much if you go across power plane(s).

Not the answer you're looking for? Browse other questions tagged current high-frequency signal-integrity high-speed via or ask your own question.

8
50MHz SPI PCB routing, use vias or resistors?
5
Should vias be used for every GND connection?
2
High-speed clock line crossing under data lines
5
Inner layer routing of LVDS traces in between ground vias
4
How does trace/via clearance affect parasitic inductance if they go to the same net
3
Vias on a high-speed board
9
Why try to maximize number of grounding vias in RF PCBs?
7
High Frequency Characteristics of Solder-Filled Vias