I have a 4 KHz piezo buzzer and a microcontroller (arduino) that outputs that 4 KHz from one of it's pins. All is fine if I connect the buzzer to the output with one pin and to the ground with another. Also all works as expected if I try to control it with MOSFET: +5V to the drain, buzzer between source and ground, and the output pin to the gate.

However if I replace MOSFET with BJT, something goes wrong and the buzzer emits just a very-very-very quiet sound. Here's what I have:

I have tried few other configurations with BJT, but result is the same. I use BC337 as a transistor (AFAIK it is analogue of 2N2222).

Could anybody clarify why this happens?

I've measured voltage levels. I have 2.51 V between the microcontroller output and the ground. I get 5 V / 2 because it generates square waves, isn't it? Then I have 2.1 V around the base resistor. And, surprisingly I've got 5 V around the buzzer! Shouldn't I get 2.5 V?

Also I noticed that once I measure voltage across the buzzer the sound become a bit louder. So I've tried to add a resistor in parallel to it. Aaaand… now it works! 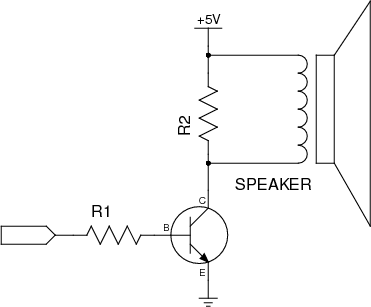 The question left open: why it doesn't work as expected if I remove R2?

The piezo buzzer use piezoelectric effect to emit sound (the material in the buzzer deform itself due to voltage, deformation will be "proportional" to the voltage applied). Since sound is pressure wave one have to provide oscillating voltage to the buzzer in order to produce oscillating deformations. And most important:

From the electrical perspective piezo buzzer act like capacitor!

So why circuit with BJT and without R2 did not work?

Now, more interesting question is why MOSFET seemed to work (and BJT did not)?

I am not sure but here is my thory: My guess is that you have used one of this big power mosfets. They tend to have big parasitic gate to source/drain capacitance, at the same order of magnitude as a capacitance of the piezo buzzer(hundreds of pF). This parasitic capacitance created AC coupling between your input signal and buzzer which was enough to produce sound.

Note: The whole issue is little more complicated then simple AC coupling, but I believe is good enough first order explanation of the phenomena.

Adding the resistor in parallel provides a path for the piezo capacitance to discharge, so then you get the varying voltage you need to produce sound.

That doesn't explain why it works with a MOSFET though, unless there is an internal diode in the MOSFET that discharges the piezo capacitance through the gate?

Are you definitely sure you're using an output pin which can source current properly? (for example, it's not just got some weak internal pull-up turned on?) What voltage does each end of the 2k2 resistor rise to during the cycle?

I know it sounds as though you have this OK if you can source current into the buzzer directly, but it might be worth checking that nothing changed between tests.

I have experienced this with a bjt before as well .A piezo crystal is a very high impedance part. You'll want some other lower impedance load in parallel with the piezo. Maybe start with a 47K? Then work up and down from there for the required volume.

Not the answer you're looking for? Browse other questions tagged frequency sound bjt or ask your own question.

3
NPN BJT base->emitter resistance is effectively zero?
1
P-channel MOSFET with variable resistance on the drain
19
What is the difference between a buzzer and a speaker and are there any other basic electric/electronic things that output sound?
2
ATtiny13a base resistor for 2N2222A
0
Saturating BJT with phototransistor
0
Biasing Two BJTs with One Signal
3
Driving a tiny speaker via pwm, amplified with a BJT - in reverse?
0
Use TC4427EPA to drive an audible buzzer