Can someone help check my solution for this timing diagram?

I've been working on some timing diagrams and I keep mixing up the behaviors for the different flip flops.

I think I have the logic correct. If someone could please let me know if I'm anywhere close, I'd greatly appreciate it! Here's what I believe is how Y2, Y3, and Y4 should behave.

If anyone can let me know if I'm close, it'd make my day! Thanks.

Black is what was given and red is what I've done so far. 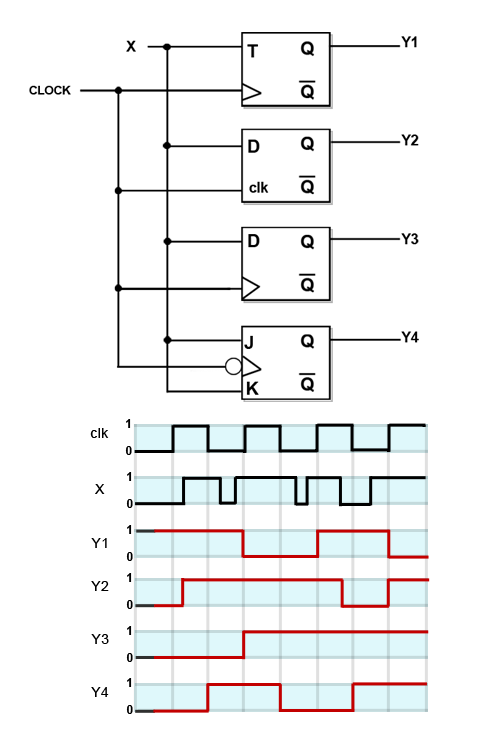 It looks like you are almost there, except that you are mixing up the behavior of the T input and the clock.

The way you have solved for the T flip flop looks like you believe that the high values of the clock specify "toggle requested" and the rising edge of the T input actually triggers the toggle.

But in fact it is exactly the other way around! A high value of the T input specifies a request to the flip-flop that "a toggle is requested", and the rising edge of the clock is the trigger. If T is high, while a clock edge arrives, then the flip-flop toggles. If T is low while the edge arrives, nothing happens.

It looks like you understand the concept, but you mixed up the roles of the signals.

Not the answer you're looking for? Browse other questions tagged digital-logic clock flipflop timing counter or ask your own question.

8
timing constraint for bus synchronizer circuits
1
How do I use T-Flip Flops to derive circuits - given the clock signal speed?
1
Can someone help me complete this Verilog code for this sequential circuit?
1
Latching circuit that delays the on state for different outputs
2
Dividing a clock in Verilog - is it OK?
27
What is a flip flop?
1
Why does this BJT logic circuit only function intermittently?
5
history of edge-triggered D flip-flop design using three S-R latches
1
Confusion about when a JK flip flop is triggered