Can you charge and discharge a Li-ion powerbank at the same time?

I thought that you could charge and discharge a battery at the same time without issue, but after googling I find that half of the articles say that you can't do that (or you can, but the battery life is shortened or the battery will burn). I also came across the term pass-through charging.

So what is the answer to this? Can you for instance use it in your home project for some 5 V DC circuit as a UPS when we charge and discharge at the same time?

"Battery" and "power bank" do not mean the same thing. A battery is a relatively simple thing, and you can find one inside any power bank. A power bank is a more complicated assembly of many components.

Some power banks can draw power from an external power supply while simultaneously providing power to an appliance (e.g., to your phone). Other power banks won't let you do that. It's an arbitrary choice that was made by the engineers who designed the thing. Usually, if a power bank won't let you do both at the same time, it lets you know by simply refusing to switch on its output while it is plugged in to an up-stream power supply.

If a power bank does let you make both connections at the same time, then whether or not it charges or discharges its internal battery depends on whether the up-stream power supply is able to provide more or less power than the down-stream appliance is willing to accept. If the up-stream can supply more power, then the battery may be charged. If the down-stream wants more power, then the battery may be discharged. If they're both about the same, then the battery's charge status maybe won't change at all.

A battery by itself can have current flowing in or out, but not both at the same time.

For example, this arrangement is how a car battery + alternator works. With the engine off, the battery discharges into the load. When the engine runs, the alternator puts power into the battery and powers the rest of the car at a controlled voltage, determined by the needs of the battery.

The fact that the alternator, battery and load are connected together is why automotive power is a wider range of voltage: it is the range of the lead-acid battery, whose voltage varies depending on state-of-charge (11.6 ~ 13.8V, up to 14.7 with float charge.) More here: What should the voltage of a fully charged lead acid battery be?

A power bank is a different design. Unlike an automobile, they separate the charging circuit and output regulation into different circuits. Thus, they deliver a fixed output voltage regardless of the battery state-of-charge.

Small, economical power banks (e.g., USB in / USB out) use a charger IC for the input to the battery, and a boost / buck / buck-boost from the battery to the load. The charger IC is low current, so typically it will shut down the output DCDC while charging the battery (no pass-through.)

Fancier power banks support pass-through power if their power source allows it. That is, the 'charger' side has enough extra current to power both an attached load and charge the battery.

Phones and laptops are more sophisticated than cheap power banks. These all support charge-while-run. But they, too, may reduce the load (switch to low power mode) to allow for more power to make its way to the battery.

Finally, a UPS works like a power bank that has pass-through capability. The battery charge side has enough capacity to power the load and charge the battery at the same time. So it will switch seamlessly between AC power and battery power with no interruption at the load.

But the charger certainly can be made to be able to supply power to the load and charge the battery at the same time. That's no different than a power supply supplying two loads in parallel at the same time.

Different UPS designs will do different things. The devil is in the details. But a UPS is not just a battery.

It really depends on the circuits involved. Li-ion batteries have a constant current followed by constant voltage charge profile. One issue is with the constant current part of the profile. During this time, the voltage can/will fluctuate depending on the batteries internal structure. Also the "load" is in parallel with the battery, so if the circuit pulls 0.5A and the battery charger is trying to push 1A into the battery, it's now down by 50% which will cause the charger to lower it's voltage which will affect the current into the battery etc.

If you look at the schematic below, as the battery voltage rises during charging, the charger is going to raise its voltage in order to maintain the constant current, and so R1 voltage will increase as a result. How this affects your circuit depends on the actual parts in use. Can they handle the voltage fluctuations, can the current source maintain stability with the extra current being siphoned off, will the battery reach a full(enough) charge? 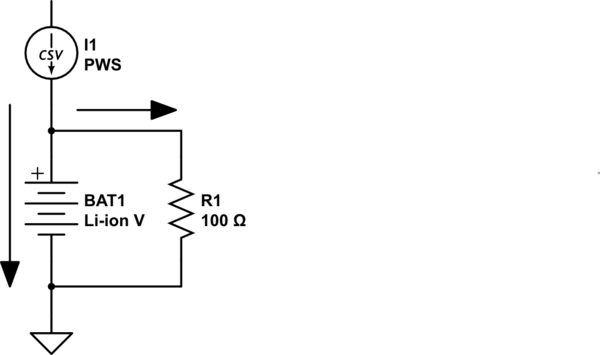 You physically can't charge and discharge the battery at the same time, the battery has only two terminals, and fundamentally either current flows in or it flows out.

The simplest systems just have charger and load connected in paralell to the battery. With such a system charge while run is possible, but can lead to a sub-optimal charge profile for the battery. Depending on the size of the load and the rate of the charger, it can also lead to confusing situations where the charger belives it is charging the battery, but the batery is actually discharging.

Another obvious issue with a powerbank is what happens when somone connects the output to the input. If the powerbank allows simultanious charge and discharge then the result will be that the powerbank tries in vain to charge itself and just ends up sitting there wasting charge.

The simplest way for a power bank manufacturer to avoid these issues is to simply disallow simultanious charging and discharging.

11
What should the voltage of a fully charged lead acid battery be?

0
Battery Charge and Discharge time for constant voltage charge battery, and how to know if its fully charged
0
At what point in the charge cycle do lithium ion batteries draw the most current?
2
Why do old batteries take the same amount of time to charge
0
Can't charge and use a Li-Po Bluetooth receiver at the same time - can I bypass the battery though?
2
laptop batteries charging myths - Long life OR short life
2
Is the discharge rate for all AAA batteries the same?
1
can I charge battery at the same time as using it if it is the new usb c pd
0
Charge and discharge cycles for optimum battery health
3
Preserving lithium-ion battery vs cycle count: Greatest influence between depth of charge vs discharge?