Disclaimer: I know very little about electronics, but I'm willing to learn as I go. My experience consists of playing with Arduinos and fixing a lamp by soldering a replacement switch. Please be gentle and explicit in your comments. Thanks!

My sewing machine (Singer Quantum Stylist 9910) runs as soon as the power is switched on, instead of when I press the foot pedal. It does this even with the foot pedal unplugged, so the problem is definitely in the machine. I hypothesized that there's a short in the power supply circuitry. I opened up the power supply and found the circuit board in the photos. Here are the things I noticed: 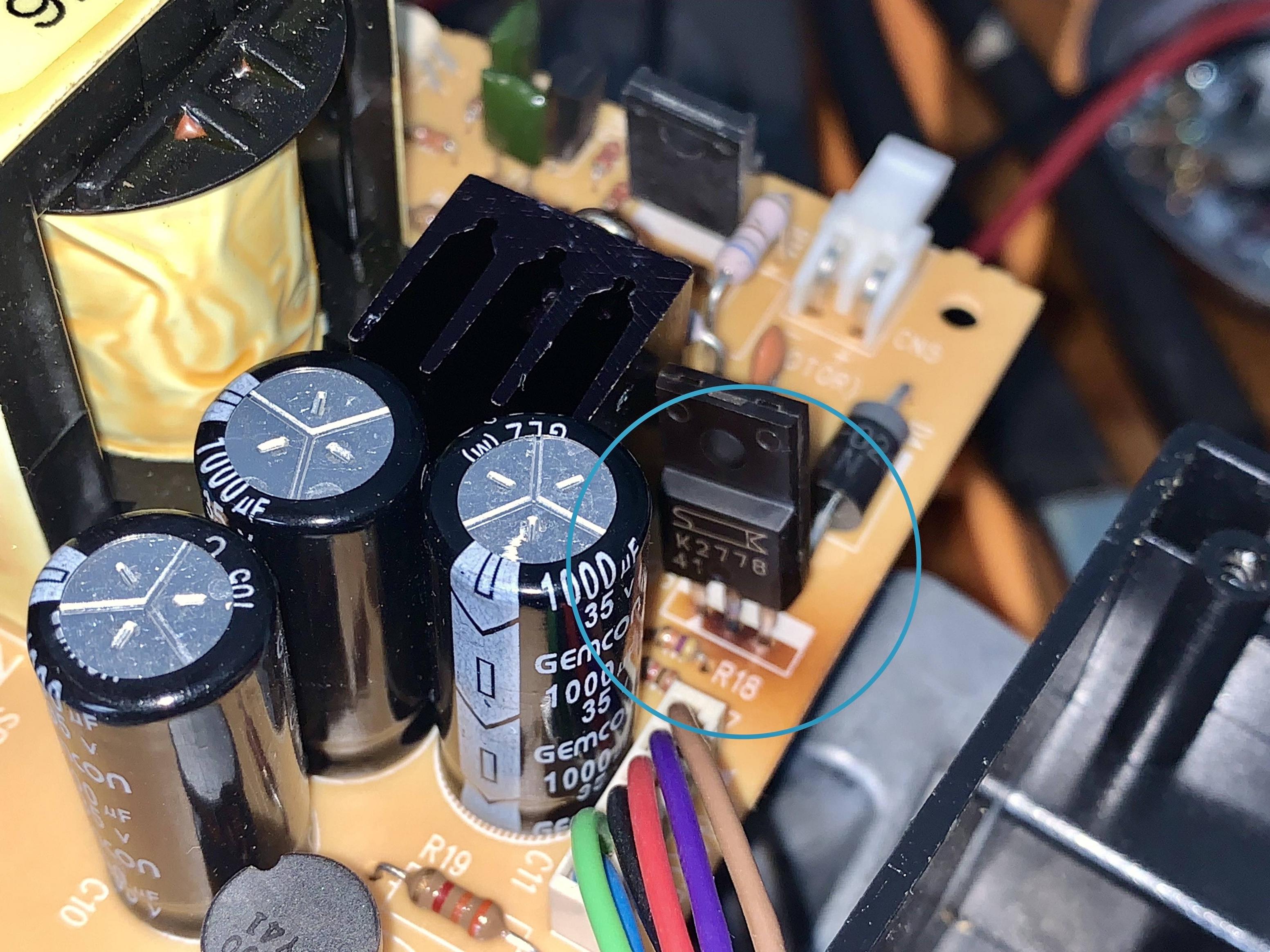 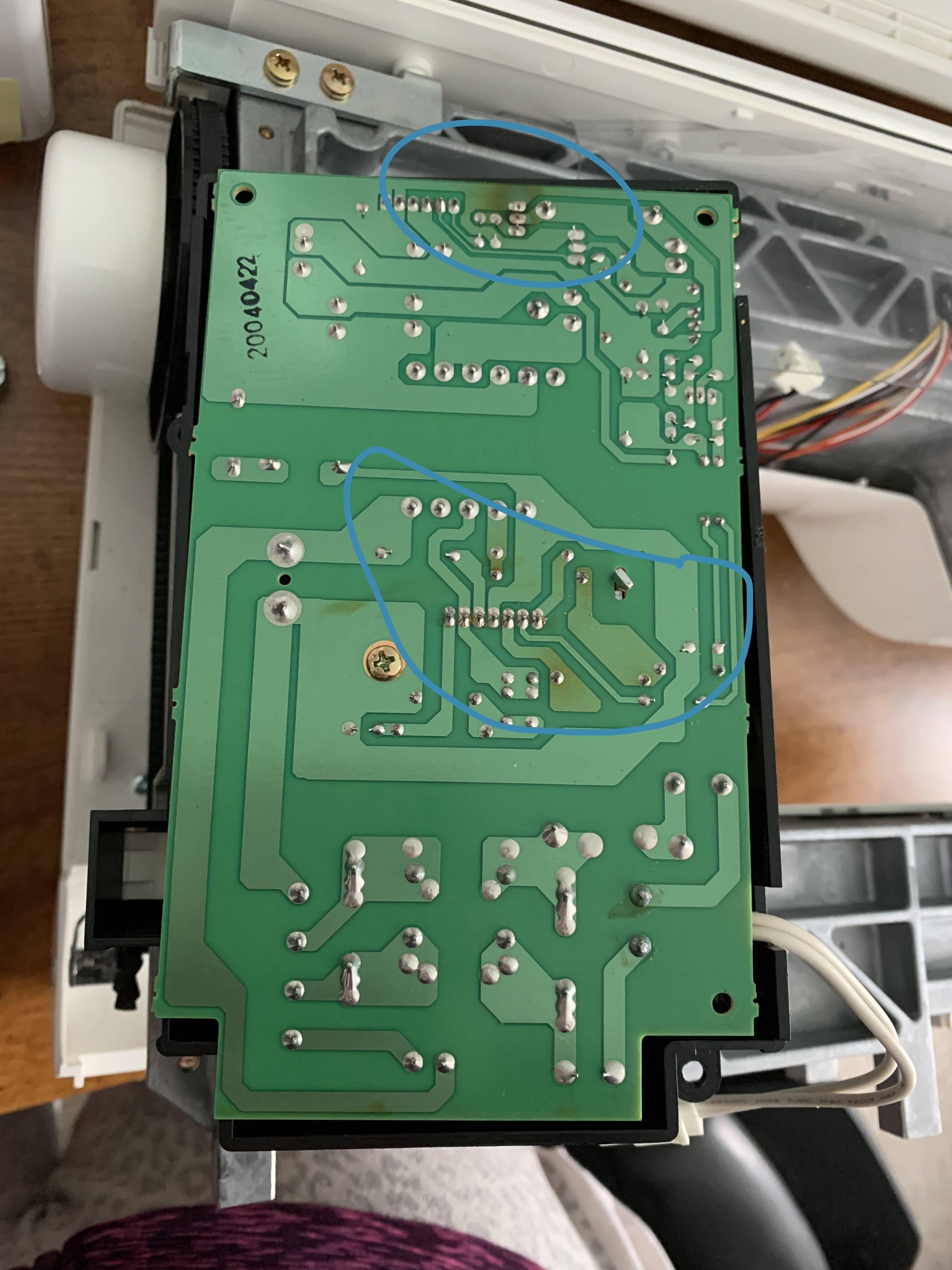 These observations led me to hypothesize that the transistor shorted out. I read that transistors can be used as part of a power switch, so I think a shorted transistor would cause a closed circuit and manifest itself as a runaway sewing machine.

Thank very much for your help!

More photos of the PCB in case they help: 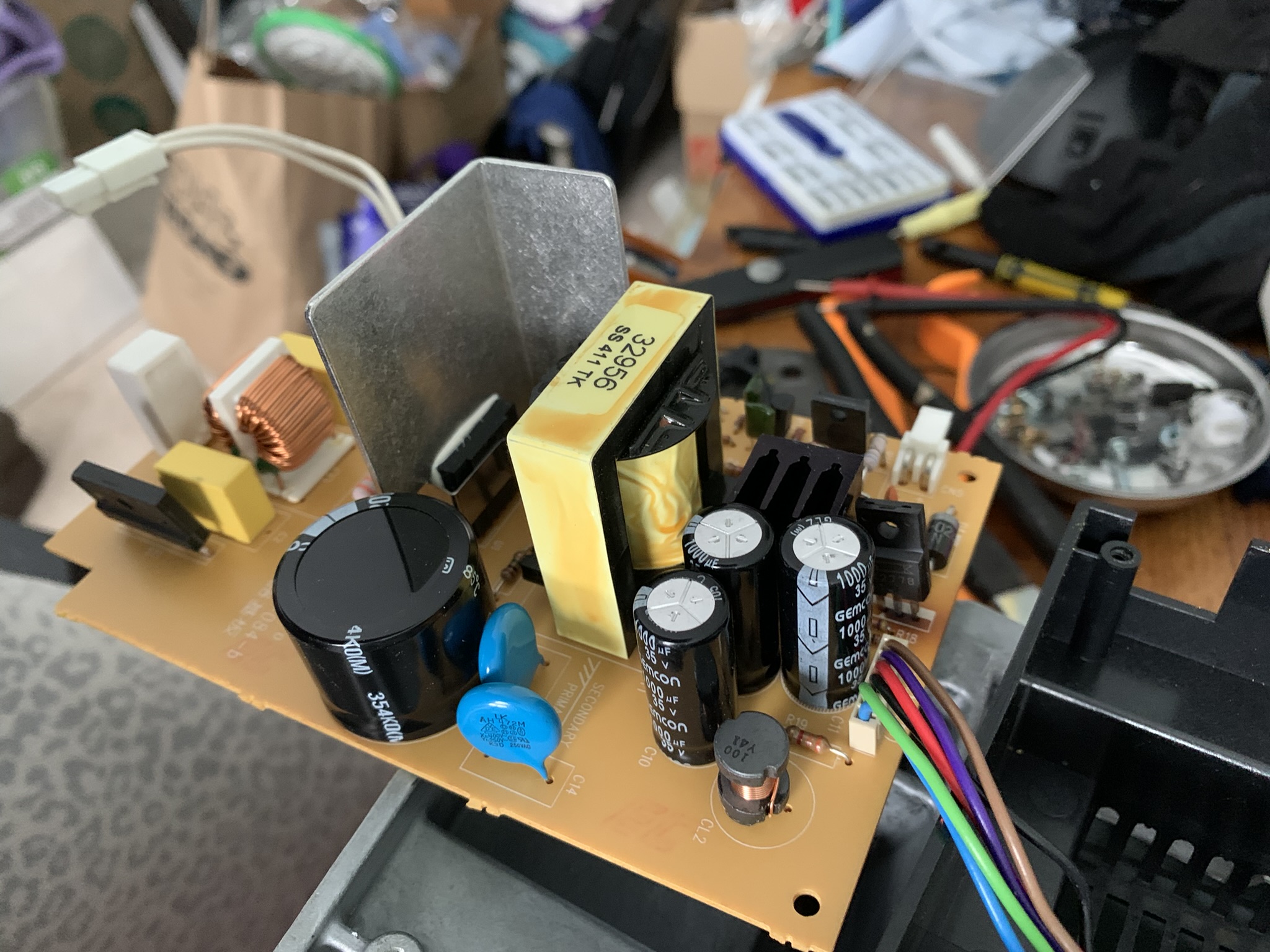 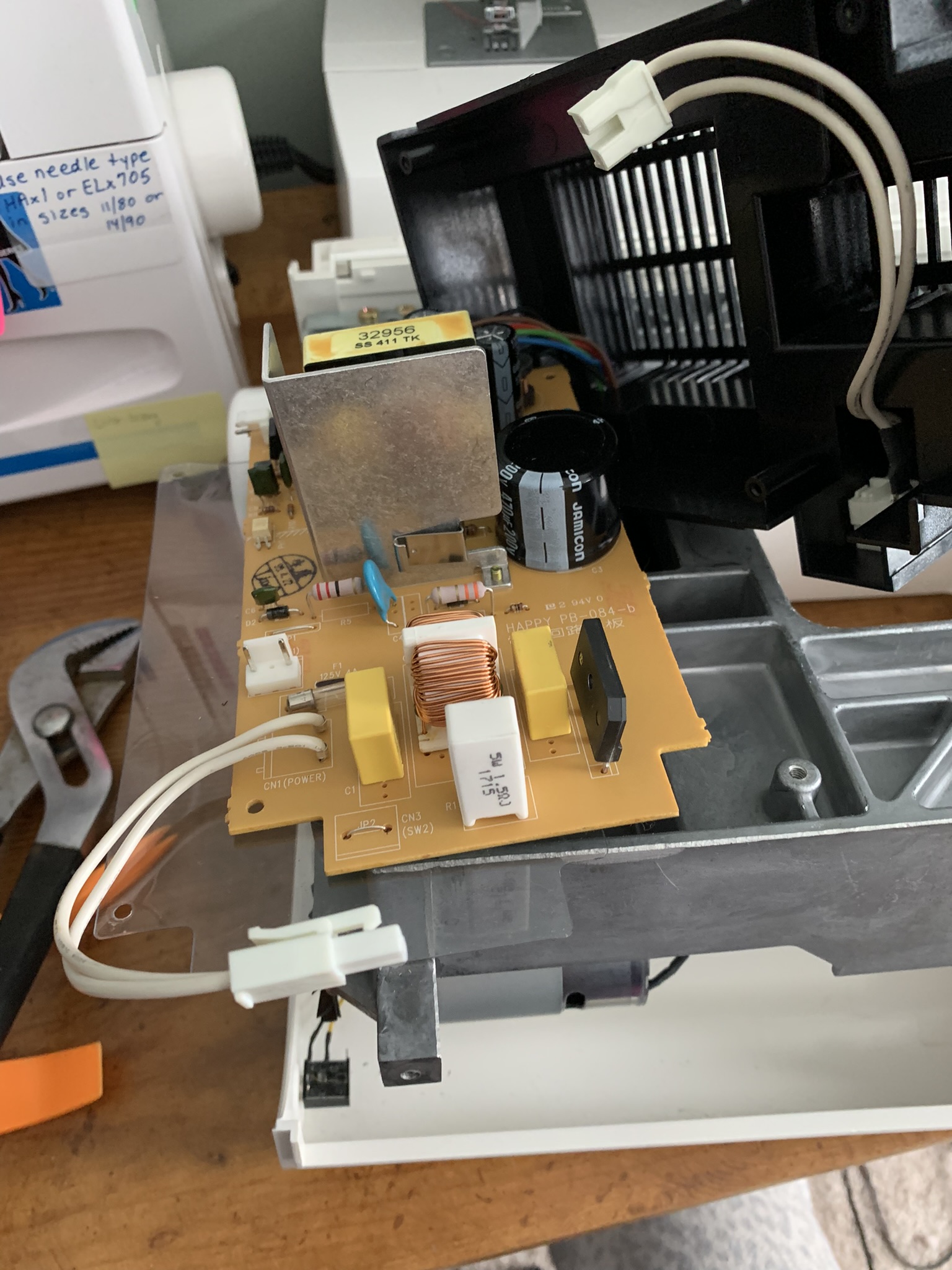 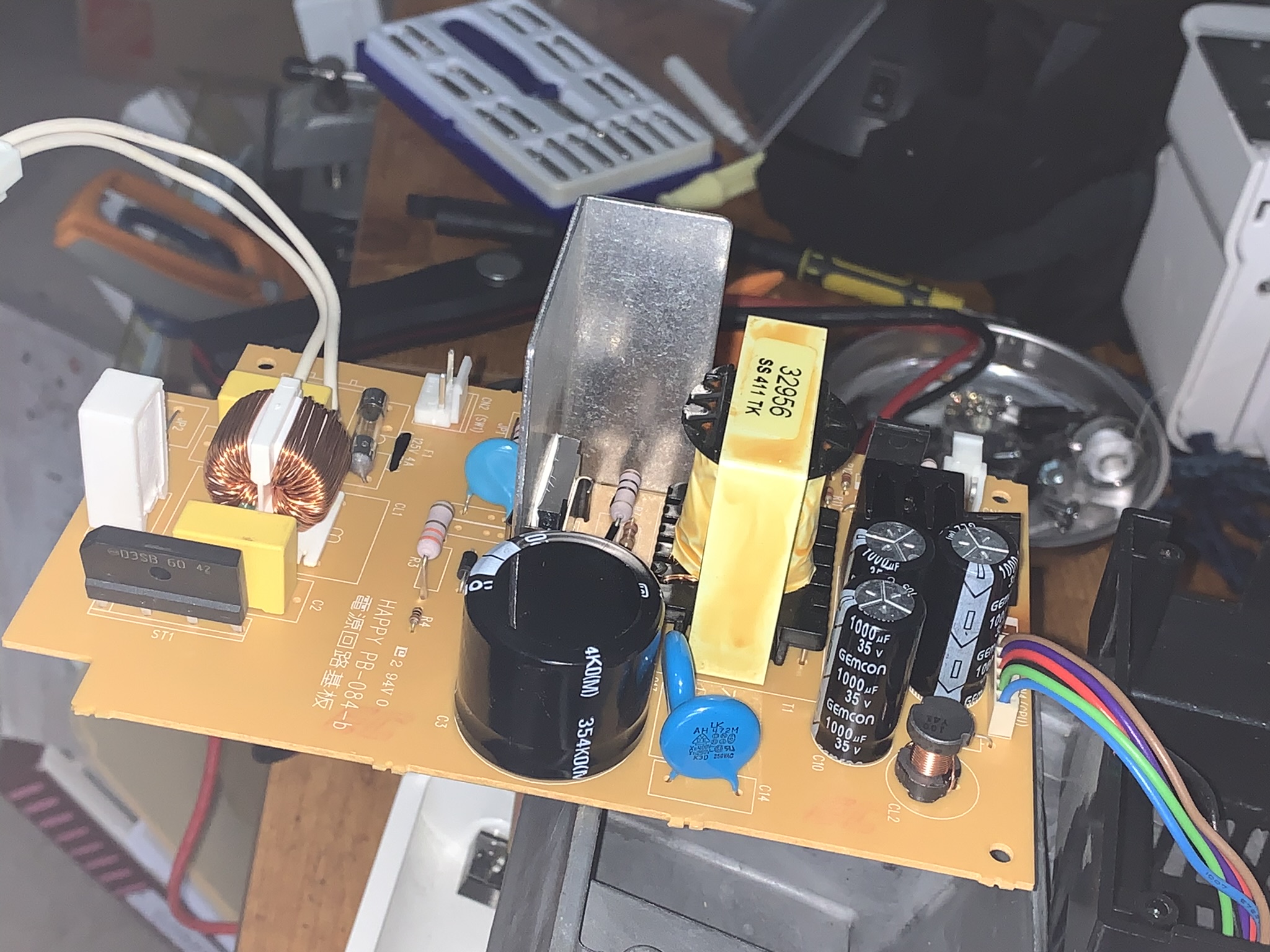 The transistor is a Sanken 2SK2778 MOSFET. The rest of the part number is irrelevant (a date code, most likely). It's not made anymore (like many MOSFETs, technology has moved on) so the substitutes you can find may be NOS or counterfeits made by re-marking newer parts. They probably will work though.

You can verify that the transistor is blown, even in-circuit, by measuring between the 2nd and 3rd pins from the left with a multimeter. If the resistance is similar to shorting the leads together then it's a goner.

This is a relatively high voltage (100V) logic-level part. Most of the newer parts have double or more the gate charge/capacitances so they are harder to drive with the existing circuit but would have less Rds(on) so maybe it's a wash. If you feel like gambling in a different way, the IRLI540GPBF has better specs (other than almost 3x the input capacitances), comes in the overmolded TO220 like the original, and is available from reputable suppliers.

The discoloration is probably just what happens with time and those paper phenolic FR2 boards, I would not worry about it too much. The pads are fragile however, especially when they've been heated, so take care when swapping the part out you don't lift them.