Problem with microphone powering up a comparator circuit

The circuit below is supposed to turn on a LED when the microphone input reaches these levels:

What this circuit does in real life is when we turn on the power, all 4 LEDs light up.

When we remove the mic amplifier, it doesn't power up the LEDs since it only produces mV.

When we changed the amplifier gain, it lights up 2-3 LEDs but speaking to the microphone doesn't turn on the remainng LEDs.

Our instructor suggested that the impedance of the microphone and our circuit does not match. Is that the reason or can any other fix be done? 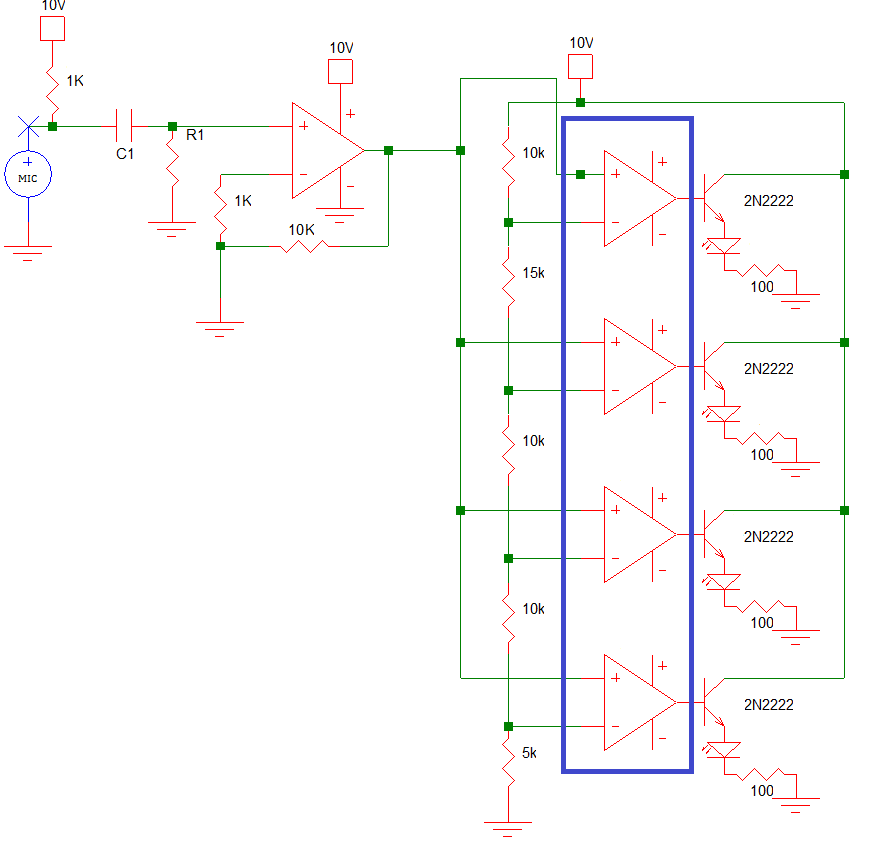 You are also going to have problems using a 741 op-amp - it won't cope with inputs close to its negative supply. It basically won't work - you'll need a mid-rail point and reference input resistors to the mid-rail.

Another problem is the 741's output voltage - according to the spec it won't properly swing-down to 0V (the most negative supply rail). You might just get about 1V from it but nothing lower. This will keep one of the LEDs on.

Assuming you create a mid-rail suitable for the 741 you'll have other problems driving the LM324 circuits. Ideally you should convert the peaks produced from the amplifier into a more consistent dc voltage that tracks the peaks. There are circuits that can do this but you'll need to solve the above first.

You haven't got de-coupler capacitors on the op-amp supplies - good practice (to avoid circuit oscillations and other problems) is to use at least 10nF.

It's got nothing to do with matching your microphone so I'd also suggest you get a new instructor who knows something about op-amps.

Not the answer you're looking for? Browse other questions tagged led operational-amplifier microphone comparator impedance-matching or ask your own question.