How can I power the blue LEDs separetely on this aquarium light?

I have a Beamswork LED aquarium light like this. It has a 3 way switch:

It has a single mains power plug.

What I want to do is make it have two mains wall plugs. I want one to power the blue LEDs all the time, always on.

I opened the cover and found this: 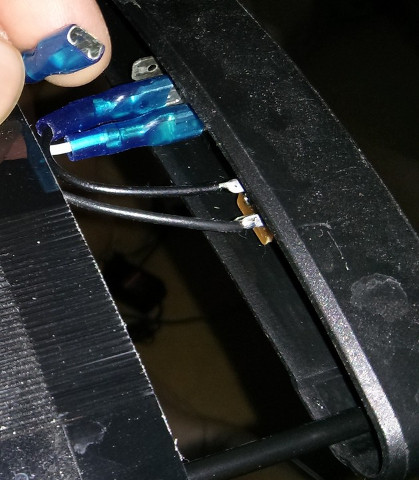 The 2 black wires connected to the brown PCB is where the mains adapter plugs into. Then there are 3 blue-covered connectors which are connected to the 3 way switch. I don't know which ones control which colour as I didn't test it plugged in, but I think the white one is white LED, the middle one is power, the one I'm holding had a blue wire so probably blue LED. Is there a way to connect a 2nd mains plug to that blue LED connector (if it is that) so it powers separately? Drilling through the plastic to get a wire in is fine, but I don't know how what electric connectors or connections I need.

I don't know much about electrics, first-time project! Thanks.

EDIT: This is is the spec of the adapter: 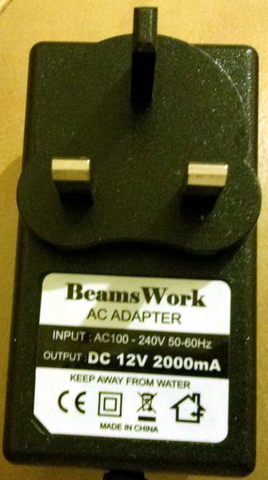 And here I have done a few tests: 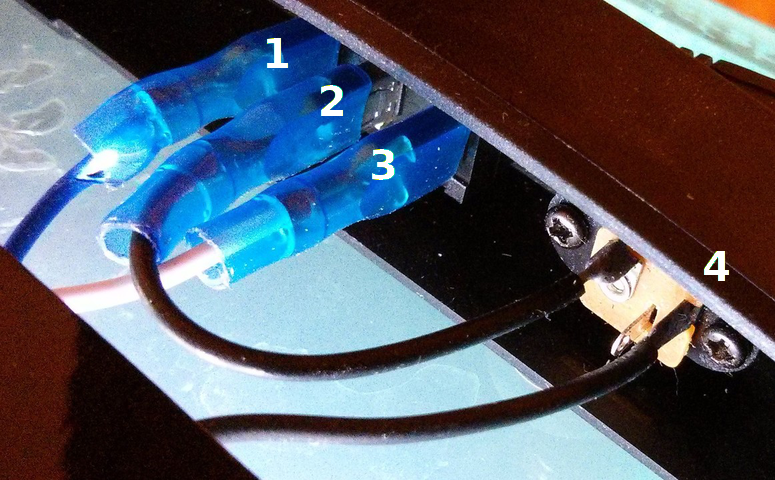 I'm thinking of getting a second power adapter and a male connector to fit directly to wire 1 (so disconnecting wire 1 from the original switch above), so I can keep the blue LEDs always on. But I'm worried, since wire 3 turns on both the blue and white LEDs (even if wire 1 is disconnected), will this make the blue LEDs get double power and cause a problem?

My goal in the end is to have the blue LEDs always on (because they will be powered separately from a new mains adapter) 24 hours a day. And the white LEDS (which also turn on the blue LEDs too) to be plugged into a plug timer and turn off at certain times of the day. Any suggestions?

This is only an educated guess given the pictures and description. You need to do more testing and convince yourself that this works.

It looks like you could take wires 1 and 2 and connect them and get blue LEDs only, and 2 and 3 and get blue and white LEDs. if this is true you could buy a little timer relay kit from any electronics hobby store and connect it between wire 3 and what wire 3 plugs in to. Set the switch to "blue only" and leave it in that position, using the timer relay to do the white+blue cycle as you want.

If the three "blue-covered connectors" go to the control switch then it is likely that your neatest solution will be to "force" the blue LEDs always to be on by permanently having the blue-led wire connected to the power feed into the switch. Forget about having seperate power plugs on the wall - that sounds messy to me.

I don't know how adept you are at rewiring the switch but if it were me doing it I'd purchase the mating halves of the blue-covered connectors and work on it this way.

Be very aware - I don't know what voltage is on these wires - it could be low voltage and therefore safe or it could be a higher voltage. You mention that there is a mains adapter but this may still generate a big voltage and/or get warm and pose a fire hazard should it be incorrectly connected to something. Take care is the watch-word

Not the answer you're looking for? Browse other questions tagged wire light mains led-strip or ask your own question.

3
Power LED light from battery when mains fails
1
How to generate Red light from a Blue-Dominated Spectrum
0
0,5m led strip (15 leds) Phone Power Supply
2
Wire color coding: not sure about the correct wire
4
Why does the power strip's switch light turn on even when the switch is off when I plug in a Schuko plug (CEE 7/7)?
1
How to wire DotStar LED strip with 6 wires at the start of the strip
0
Popped a power supply fuse - What did I do wrong?
0
Turning old floor fan into floor floor study light
0
Initial connection - 5V LED strip