I'm working on the UART communication of PIC18F4520. I have tried simulating the code on ISIS proteus and then also checked the real time result. One thing I am quite confused about is that the characters I get from the two i.e. simulation and the experiment are not the same. I have no confirmation of this but still wondering if it is possible that for every other machine, ASCII characters are interpreted differently. Is this possible..?

The output has been shown in this snapshot: 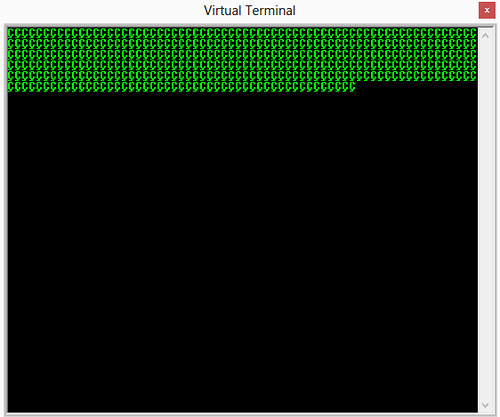 No, since it's an encoding standard, if set to ASCII the hex values should mostly be interpreted the same on any machine. The printable A-Z, a-z and numeric characters should be reliable, but as Chris notes in the comments there can be differences with other codes and the extended set.

If you are getting different results between simulation and real life, then it's likely you have set things up incorrectly. Check your baud rates, stop/parity bits, handshaking, and also that the terminal program is actually set to ASCII (i.e. not displaying in hex/octal/binary)

For reference here is an ASCII table.

EDIT - now you have added the code, I see another issue. You set the variable r = 'y', but then read the UART and store the result in this variable, overwriting it. This means the code will only send a y on the first loop. Use a separate variable to read into if yu don't want this to happen (or reset to y within the loop each time)

First off, that code looks to me like it puts out 1 'y', and then it reads, getting I-don't-know-what and outputting what it reads. Does ReadUSART block waiting for a character?

Second, are you certain of your baud rate calculations? I don't know the platform, so I can't check you, but if your serial terminal is set wrong in the real world, that could easily cause this kind of behavior.

You can see there are similarities at the binary level, so that if somehow the reception of start and stop bits is unreliable or whatever, it could explain how y turns to Ç.

A correct bistream of back to back yyyy looks like:

Now you have to understand that in RS-232 there can be a synchronization problem! The only framing information is the 0 start bit and the 1 stop bit. If the start bit is not received correctly, and there is back-to-back continuous transmission, the only way that the receiver can detect that it is in error is if it receives a 0 at a point where the stop bit is expected! If a variety of characters are transmitted, hopefully it will lock in on the correct framing eventually. If there is a pause in the transmission, of course, that helps too.

So assuming a correct receiver and a reliable link (except for missing the start bit), a stream of y could be misinterpreted as a stream of g. You don't need bad hardware to get this screwup.

Now g has code 67, which isn't C7, but some other problem can perhaps explain that one, and also the fact that you were consistently getting the C7 character.

I have got my problem solved i guess. There was a problem with the development board and as i changed the board, i got the data without any glitches. Thank you everyone.

Not the answer you're looking for? Browse other questions tagged pic c rs232 or ask your own question.