I have the following circuit designed to drive 3 PWM pins off a 3v3 Arduino Pro Mini -- one pin for each of R, G, B in this set of 5 RGB LEDs. 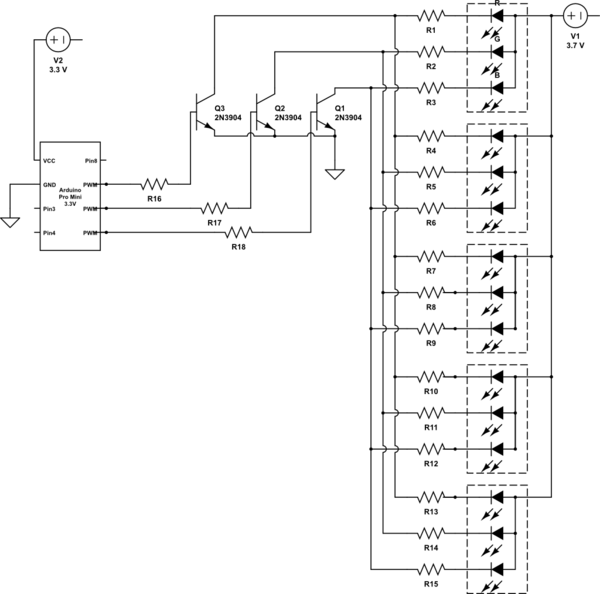 5 RGB LEDs of this type.

For a 3.7 Volt supply to RGB LEDs, the blue channels have a fairly high forward voltage (3.0 to 3.6 Volts per the datasheet), so using BJTs will leave very little or no voltage headroom for the current limiting resistor to regulate current.

The 2n3904 BJT shown, has a Vce(sat) of 0.2 Volts as per the datasheet, and will have a threshold pretty close to this figure, below which it will not conduct.

In other words, the design is likely to be marginal at best, or not work at all for the blue channel at least, depending on the actual Vf of each individual blue channel of the LEDs.

Instead, consider using inexpensive 3.3 Volt friendly, logic level MOSFETs such as the IRLML2502, available for as little as 24 cents each.

Thus, there is nearly 0.1 Volts of headroom assured, say 0.5 Volts typical, for the blue channel LEDs. This is far better than what you would get from the BJT design.

In practice, since a MOSFET drain-to-source junction behaves essentially as an Ohmic path for current at a specified Vgs, there will be a linear reduction of voltage drop as the available voltage headroom reduces, so the blue part of the LEDs would continue to glow, if a little dimly, even at worst case. This is unlike the collector-emitter junction behavior of a BJT, which will essentially stop conducting entirely as you approach the marginal case.

Added advantages of the MOSFET approach:

I think it is a reasonable design so far...

You need to check that the transistor will cope with the current of 5 LEDs - look up its data sheet and look for peak collector current. If the transistor is OK then you can assume it will switch to virtually a short circuit for the purposes of calculating LED resistor values.

To do this you need to know what the forward volt-drop is across the LED for the amount of current you want to put through it. As you are running from 3.7V to power the LEDs, subtract the forward LED volt drop and what is left will appear across the resistor and transistor - but remember you can probably count on the transistor being a short providing it will handle the overall current from 5 LEDs.

Base resistor - the IO pin will want to produce 3.3V and the base will "want" 0.7V BUT, more importantly you'll need to inject a few milliamps into the base to properly turn-on the transistor. Assuming it has a current gain of 100 (check the transistor spec sheet) and assuming you want 200mA through the collector from 5 x LEDs, you'll need to push into the base a minimum of 2mA - it is a minimum and best go for 5 times this value (10mA).

So there is 3.3V from the IO pin wanting to drive 10mA through the base of the transistor which needs 0.7V - this means the volt-drop on the base resistor is 2.6V. It is passing 10mA so the resistor needs to be 260 ohms - choose 270R or 240 R unless you've got access to a closer range.

Power waste is mainly in the resistors in series with the LEDs and the actual power in the LEDs. I don't think there is much you can do about this without running the LEDs from a higher voltage source and putting the LEDs in series.

Not the answer you're looking for? Browse other questions tagged arduino led transistors resistors or ask your own question.