I'm trying to take the input from a microphone and use it to power an LED, so that it's off at ambient sound, and (the peak brightness) gets brighter with noise level. It's okay if it flickers, I'm just trying to get the peak voltage to be proportional to sound levels.

I tried to make a voltage divider so that the voltage between RC and RE was 1.8 volts, and 0.6 for R1 and R2. However, this doesn't work, simulated or on the breadboard. What am I doing wrong?

I think a single transistor solution won't be good enough - you have to consider the standing DC currents when no microphone is present - these will likely still illuminate your LED and this is not what you want. Here's a circuit I designed many, many years ago and I've added a third transistor stage on to drive a LED: - 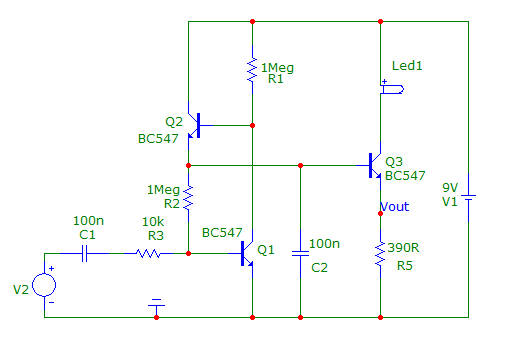 You might find it's a little too sensitive for your microphone but that can be reduced by increasing R3. It's output stage is designed to drive a 20mA LED hence the 390R resistor for R5. With no sound present the LED will be off.

The circuit; Q1 amplifies the input signal and Q2 rectifies the level converting AC signals into a DC level on its emitter. It's self-biasing and draws only a few micro amps when the mic is inactive. C2 smooths the rectified signal on Q2's emitter and this feeds Q3 which gives the signal enough grunt to drive the LED.

Besides the issue Dave Tweed commented on, there is the issue that your circuit modulates the current through the diode. Further, you must distinguish between the DC current and the AC (time varying) current.

First, you must solve the DC circuit by zeroing the microphone source. I calculate that the DC current through the transistor is roughly 4mA.

For this value of bias current, the AC transconductance of Q1 is roughly 150mS.

The input impedance of your CE amp is roughly 800 ohms which is quite low.

You don't specify what the output impedance of the microphone is but you must take that into account due to the low input impedance. For example, if your microphone is a "Hi-Z" microphone, much of the potential gain of your circuit will be lost due to voltage division.

This is about all that can be said without further details.

Your amplifier is not a common emitter, but rather an emitter follower. That is why it doesn't work: it does not amplify voltage. The small voltage swing of the microphone is placed across the emitter resistor + LED. The only thing that the circuit does is to provide the current delivery.

Try this small modification to your circuit. This is a common emitter. The load is on the collector side. I fiddled with the values so that the LED current oscillates between close to 0 to as high as 3 mA. Try a time-domain simulation up to 0.005 seconds in 0.0001 second increments, watching the diode current. 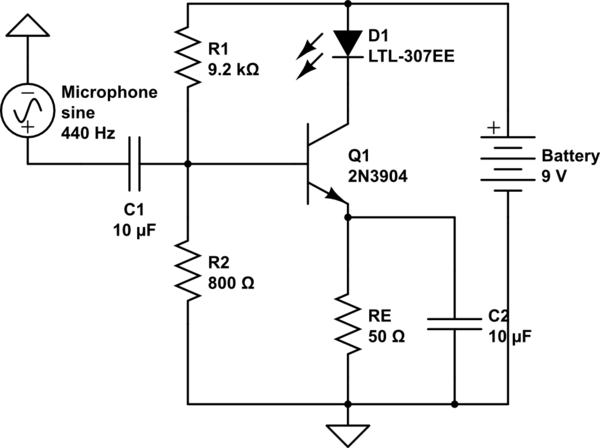 Two-stage version based on a continuation of your idea. Here we have separate voltage amplification stage followed by a PNP output stage to drive the current to the LED. This one turns the positive cycles of your wave into 20 mA current peaks through the LED. The LED is cut off on negative cycles: 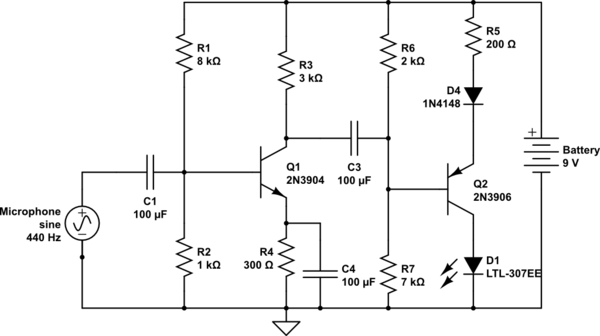 I have increased the coupling capacitors because the impedances are quite low in the circuit. The D4 diode just provides a small level shift. Without it, the voltage swing going into Q2 doesn't quite reach high enough toward the 9V rail to cut the transistor off, leaving a quiescent current through the LED. I wanted it shut off.

-2
How to boost voltages coming from an audio jack?
3
Controlling LED with 300mV AC signal
1
Electret Microphone Operation
2
Is the 555 necessary here, or can I just use an op-amp?
0
Rating loudness level with electret microphone