I found this example. It uses a 2N3904 transistor. Is this the approach I want to take? I presume I would need a higher power transistor?

I am using an external power supply that is wired into a custom board with a 5v voltage regulator so I am powering the LEDs directly from this regulator.

The LEDs come in the form of this LED light bar array (or at least very similar)...

I had mentioned in a comment in an answer below that I was using a 330 ohm resistor with each LED. On another part of this project, I use the light bars as level meters, and each separate LED is controlled via a shift register, thus the separate resistor. I realise after thinking about it that I don't need to have a resistor in series with each LED for this now as they are either all on or all off (hmmm.... sorry for my rather haphazard comments!).

I did have a thought that I could have some sort of electronic switch that can disconnect ground or 5V. Is this viable?

A transistor is basically a switch that can disconnect ground or 5V. There are transistors of all sorts, and some can switch truly huge loads. 50 LEDs is no big deal.

I suppose you have several options:

Of these, I think reducing the LED current or using a larger transistor is probably the most likely solution. Other switching devices (like a relay) are probably more expensive and slower.

Any common small signal transistor like the 2n3904 can handle 75mA without issue. A 1kΩ base resistor is used between the transistor base and the MCU pin.

Note, the schematic below only shows one led bar, you would just add the rest in the same fashion. Wire the first led's cathode to the next led's anode, and one resistor per pair. 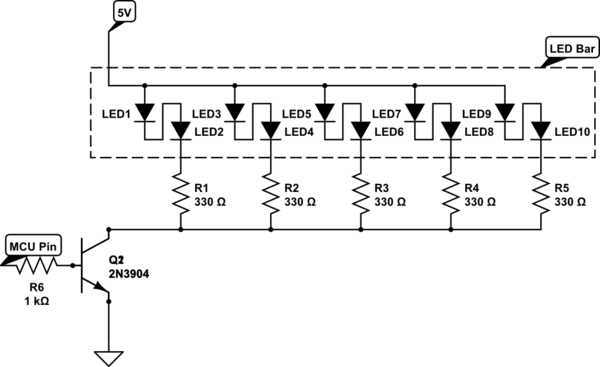 You should use the pin on the Arduino to control a transistor that turn on a relay and the relay contacts turn on the all the LEDs by apply ground. If you must use a transistor, then yes you need to find one that can handle all the current. Even with a relay, be sure to check the contact current ratings. See sample circuit below. Depending on the current rating and coil resistance of the relay you select, you may or may not need R2. 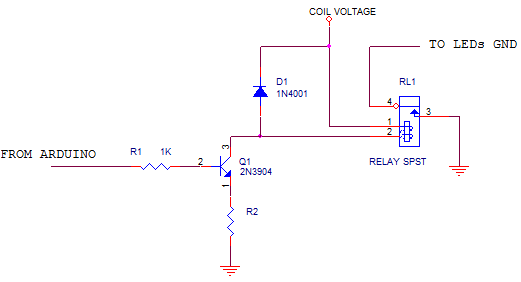 Not the answer you're looking for? Browse other questions tagged arduino led transistors or ask your own question.