I am going to draw about 20mA over a high resistance load for a short amount of time, around 20 to 50msec. It is okay if it takes the circuit a while to reach the 10kV output voltage, as to not draw too much current from the battery while charging the circuit.

When discharging, the output current will be current limited to a maximum of 20mA.

The difficulty in this question is understanding some of the requirements so I'll address this first because without answers it's debatable that this can be answered properly.

Firstly, is the load going to be applied once the output cap is charged to the required voltage? If the load is present all the time during the "charging process" then the power required is very much more than some of the answers and comments anticipate. I don't think a solution is achievable if load is always connected so I'm assuming it isn't.

The OP also says "the output current will be current limited to a maximum of 20mA". Is this a requirement of the solution or something that is external to this question? This needs an answer but for now I'm assuming it isn't required in the solution.

Proposal - A transformer is going to be needed that steps up the 3V (nominal) supply to probably about 800Vp-p. With a split primary and two N channel MOSFETs, an effective primary p-p voltage of about 12V(minus a bit of loss) should be attainable. The secondary will therefore have between 70 and 80 times the turns of the primary: - 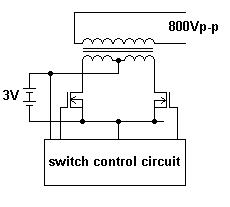 I think this is reasonable do-able and at a decent switching frequency of up to 1MHz. From experience i don't believe a transformer with more than about 100:1 stepup is practical - just too lossy.

The MOSFETs are not going to be common-place items. I think they'll need to be something like 60V rated and have an on-resistance down close to the 10 milli-ohm area. Low drain capacitance is also a requirement. More detail later as I think about it and simulate it.

Driving the MOSFETs is also tricky. It's likely that they'll need to be driven with 10 or 12V gate voltages and this means that a small boost convertor will be needed to power the switch control circuit from the 3V. This isn't a big issue. I did consider having the booster provide the power to the transformer primary but this is a significant source of inefficiency and I believe a higher turns ratio on the transformer is the best idea.

There is detail in the switch controller that needs to be ironed out like having it perform a gradual soft start to build up the o/p voltage preventing the batteries from "collapsing" under the "pressure".

The final stages would be several ( less than 10) cockcroft walton multipliers and I think the diodes used will need careful selection. More detail later - I have one in mind but I left my notes at work and my memory is letting me down!

Sorry I haven't got the full details yet but of course the question is "how can I design a circuit" meaning how can the OP design the circuit.

Mondays additions Here is the basic circuit I came up with - it generates a bit over 6kV and I decided to go for 40V rated FETs in the end because I limited the back emf with 18V zeners: - 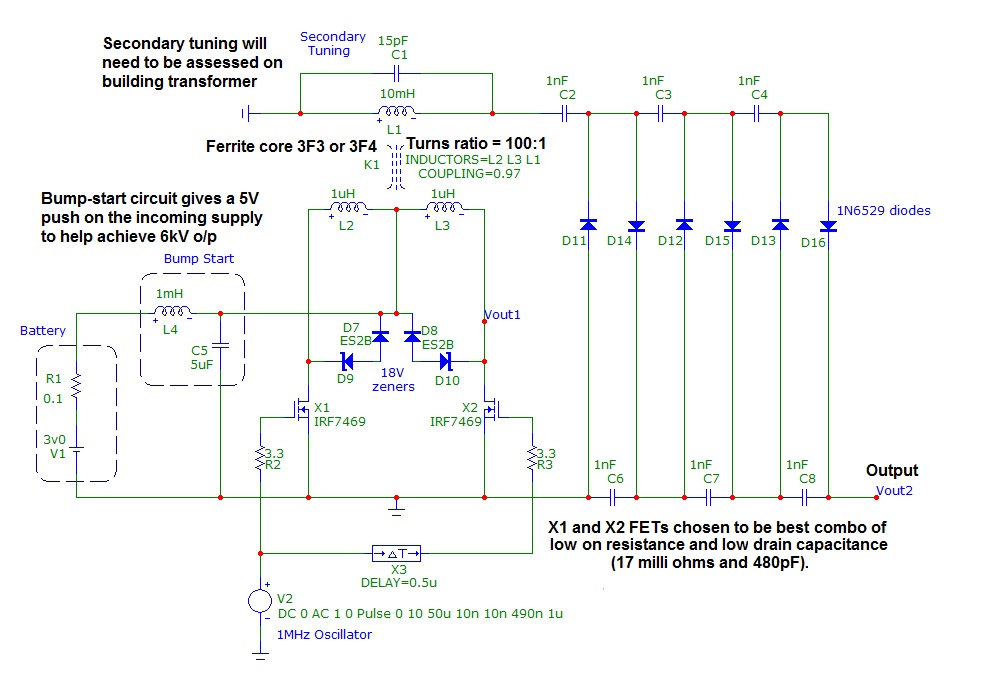 Here is the output after applying the battery. Lower display is the FET drain voltage and current taken from the battery thru 0.1ohms in series:- 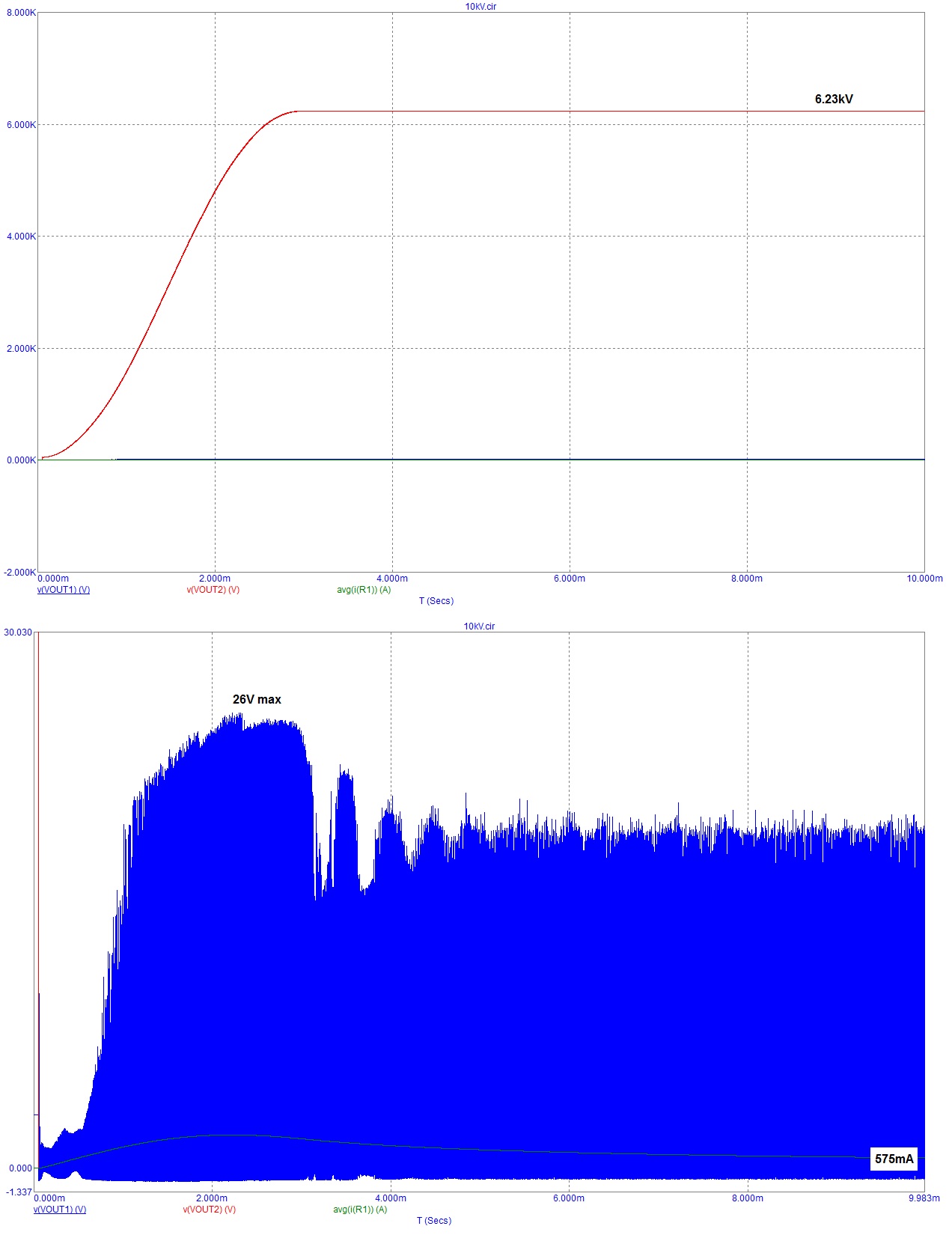 To overcome the battery's inherent resistance I used a 1mH inductor and 5uF capacitor to act as a voltage booster during power up. The best way of doing this would probably be to charge a decent sized capacitor (1000uF) up to 5V over an allowable time period and let it act as the boost to achieve +6kV output, then return to the 3V battery for trickling energy into it to keep the output at 6kV. Alternatively, as the OP wants only a 20ms period of high voltage at the output, the 1000uF may suffice to keep things reasonably steady for that period and if not increase to 10,000uF.

Not shown is the boost convertor that powers the 1MHz oscillator. There are several devices from Linear technology that would perform this function. 12V is needed for driving the gates.

Small Print The secondary of the transformer needs care in winding to keep capacitance below about 10pF. I'm not going to go into this but suffice to say, the output circuit relies on secondary resonance and so a trimmer cap of 20pF should be used to optimize output voltage without over-resonating it and causing large inefficiencies in power transfer.

Bear in mind that this could easily kill you if you do not take care. Be warned.

The traditional way of getting this for low charge levels is known as a capacitor diode bridge circuit AKA voltage multiplier. You'd use the batteries to generate a AC waveform which you then feed into the end of this multiplier circuit. 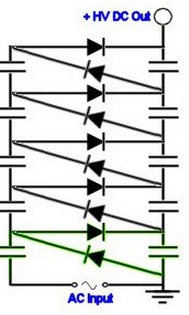 The higher the AC voltage the fewer stages you need to get to 10KV.

Be careful though, this circuit can store charge in the lower caps. Also dielectric absorption can rear it's head and you can find charge across caps that you though were discharged.

to supply that charge you need:

so in the picture above (5 caps) you'd need 1uF caps each capable of 2KV sustain and a 2KV AC waveform. As first order estimate. Hopefully this gives you enough to do your own calculations (and hopefully not kill yourself)

I even found a version inside of our favourite schematic tool circuitlab.

How critical is your voltage and duration?

What you are describing is VERY similar to a common points/coil ignition circuit from a car engine. Car battery supplies current to the primary of a ferocious transformer (the ignition coil). Breaker points periodically turn the current hard on and hard off, the sharper the rise and fall the better. The magnetic field collapsing induces a REALLY high voltage in the secondary, which goes through the distributor (essentially a motor-driven rotary switch) to the sparkplug (spark gap).

I am thinking a multi-staged diode-based voltage multiplier (driven by a square wave/oscillator) that could charge a (large) capacitor. Use something like a JFET to dump the capacitor through the primary side of a step-up transformer - somewhat gradually, with a sharp cut-off to collapse the secondary to high voltage on the kick-back.

I think this is sort of how a car's ignition coil works.

I don't know how long the discharge would be - but discharge time could be extended with a capacitor, tuned for the attached load. (If exponential decay of the voltage is okay).

Not the answer you're looking for? Browse other questions tagged high-voltage boost charge-pump or ask your own question.