Getting more amperage from a 555 output

I am working on making a drink mixer inspired by BAR2D2, I am using a gravity fed pump that is capable of running on a 9v battery. I am using a circuit with a 555 timer to control how long the pump will run. When I hook the pump directly to the battery the pump runs perfect. When I plug it onto my circuit, I get nothing. It turns out I am not getting enough amperage to run the pump.

How can I get more amperage to my pump but still have the timing controlled by my 555 timer?

This is the circuit diagram I used to hook up the 555 timer circuit:

When I put power to the circuit I want the pump to run for 4 seconds which will fill up a cup. the green LED is where I am putting the power leads that go to the pump. When I use the green LED in the circuit the circuit works perfectly. When I replace it with the pump the pump doesn't come on. When I hook the pump to the battery the pump works. My best guess is the pump needs 2 amps to run and it is not getting that.

You need to buffer that output with a power stage. You can do that in many ways, using a relay is one of them, but I would not advise that.

A MOSFET power stage will be faster and more durable because there are no mechanical components.

As Alfred Centauri points out it is not starightforward to know why your npn design didnt work without an schematic, but Ill suggest a solution. 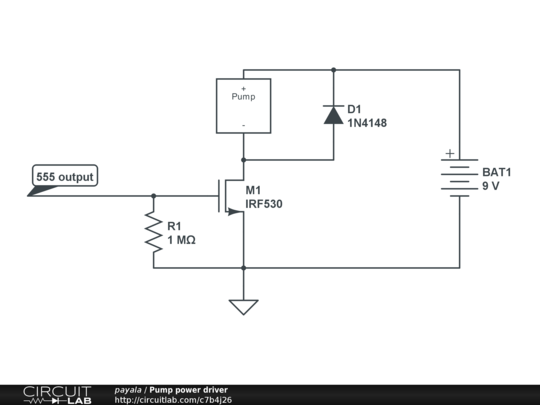 The only thing you need to make sure is that the mosfet can handle the current needed by the pump. To do that, you need to measure the pump's current while connected to the battery directly. Now, you need a mosfet whose Rdson times that current squared (this will be the mosfet's on state power dissipation in your circuit) is less than the maximum power that the device can dissipate. For a TO220 Mosfet, that will be in the order of 0.5-1W depending on how hot you want it to run.

EDIT: The 1M pull-down is used to ensure that the MOSFET is properly switched off, draining the charge that may remain in the gate. Some might say that in this case it is not needed because the 555's output is push-pull, and can properly drive the gate to gnd. But I view this as decoupling caps, you always have to use them or you'll regret it. Besides, in this case there is a reason to use it; when power is removed, I wouldn't trust the 555 to drive the output low, and you want that MOSFET to turn off in that case. A G-S resistor is almost always a good idea.

A generic 555 timer IC can only source (or sink) about 200 mA. The pump is going to use a lot more current than that.

A few ways to boost the output current that can be used are a relay, a power transistor, or a MOSFET.

Even though a relay would work in this situation, I really wouldn't recommend it. A relay draws a lot of current and puts noise on the power rails.

A MOSFET is a lot like a bipolar junction transistor, except that it is controlled by voltage instead of current. If you want to use a MOSFET, you would connect the 555 to the gate of the MOSFET.

6
LED driver circuit interfering with 555 timer?
1
Why does this circuit keep killing my 555 timers?
2
555 Timer in Bistable Mode - Unexpected Behavior When Removing Power
4
Very weak LED dimming with combined PWM signals using 555 timers
0
Why does this 555 timer not work correctly when I plug in the Z80 CPU ground?
2
555 timer only works when I disconnect pin 4 from V+ and touch the jumper
1
Getting trigger signal for 555 timer from elevator button
2
Designing a circuit with a “short-lived” switch with 555 IC