I need to convert the levels of the SPI and I²C busses of a 5 V microntroller to a 3.3 V card reader and EEPROM memory so I chose to use the 74LCX245 since it's a bidirectional transceiver.

But it's only unidirectional at the end because you've to set a pin to tell it in which direction to translate the levels.

Can I still use it? Since SPI and I²C have data lines that need to enter to the microcontroller they will be 3.3 V. Because it will translate "Microcontroller -> 74LCX245 -> card reader", but there is no way to shift the data coming out of the memmory card with the same transceiver.

Is there any way to do it? Using the same device or should I end using the N-channel transistors?

As you already know, the 74LCX245 is bidirectional, but the direction has to be configured with a pin. So the I2C master would need logic to toggle the pin from transmit to receive whenever it is done talking, so that it can receive the acknowledgement. Since you're not implementing the I2C control block, but just using one, and it does not expose the signals which indicate the transmit/receive transitions, driving this transmit/receive pin will be difficult, but it is not provably impossible.

Therefore, the answer to your question can I still use it? is yes, I think. You'd need a circuit which tries to guess when the master is in a transmit state. This might be done by monitoring SDA and SCL to detect the passage of the start and stop conditions which basically indicate that the master is taking the bus and releasing the bus. When the master wants to speak, it will first pull SDA low. Basically, at the point it seems like a good idea to immediately put the 74LCX245 into transmit. What's coming next is the clock edge transition which indicates the start. But you don't want to delay the passage of the SDA pull down, so that the slave devices get a clear start condition. Then later if you see SDA going high while the clock is also high, that's a stop condition, and the chip can be flipped to receive.

One problem is that the chip has a just single global pin for flipping direction of all of its lines. You don't want to change the direction of the SCL line, which always goes from master to slaves. You never want to throttle the clock, even for a moment. So if you insist on using nothing but the 74LCX245, you will need two of them.

Another consideration is that the chip does not have open-drain outputs, but rather buffered ones. This could present a problem in two ways:

I don't know of any way to use a '245 chip to do level translation for I2C. As you point out, I2C doesn't include any signal that can be used to control the DIRection pin of the '245.

The canonical method for I2C level translation looks something like this: 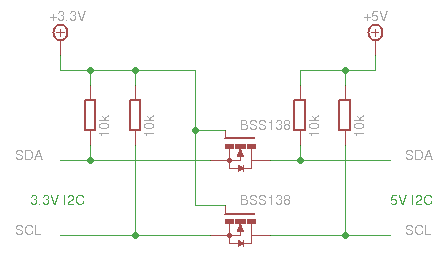 A google search for "I2C level translator" also gives several hits from NXP, TI, Maxim (and probably others) showing that they make chips specially for this function. These chips basically include the circuit above with some "speed-up" circuit to enable reaching higher bus speeds.

There are a lot of methods to do "level conversion", and the forum thread 3.3 Volt to 5.5 Volt Octal TTL line Level Conversion is very useful.

You can use a voltage devider if you don't need a lot of speed (I don't know if this will work with you).

Not the answer you're looking for? Browse other questions tagged i2c spi level-shifting or ask your own question.

17
Is SPI safe to be interrupted?
9
Does an SD card in SPI mode respect chip select/slave select? Seems to be resetting in my application
0
Configuring SPI on PIC16LF1827
4
AVR SRAM limitation
4
Correct SPI, I2C termination and EMI limiter for external bus?
1
How to (best) use a SPI SD card with STM32F1 or STM32F4?
3
Problems reading the Delkin Micro SD 16 GB using SPI
2
Splitting a bidirectional bus into two unidirectional ones
0
Level shifting between SD Card and Lipo-powered microcontroller
2
is this level shifter a dud or am i doing something silly?