I'm designing my own computer based on the Zilog Z80. It has 256KiB of static RAM with paging as well as a few megabytes of flash memory. Everything is going along pretty well until * BAM * I hit a dead end.

The problem that I am having is designing a video controller. I was thinking about some kind of a terminal or display. A 24x80 or 25x80 terminal would be wonderful. However, even a 640x480 VGA display would take up enormous amounts of memory.

That is even more than the amount of memory addressable by the Z80 at one time!

Also, if I want color, say, one bit per color, I would need 3 bits per pixel.

In addition, wouldn't it need to be dual-ported to allow access from Z80 and the monitor?

Because this is extremely difficult to implement in software and hardware, would it be a good decision to use a character ROM? It would be very difficult for me to get fuse-link PROMs or UV EEPROMS. What should I do? Can I put a character ROM in flash memory? How would I implement it in the controller? How do I tell the character ROM which character to spit out? Should I even use VGA? Would component video (NTSC or PAL) be easier than VGA?

If a good system can be designed, perhaps we can even use it for microcontrollers! Give me all you got, I need as many ideas as possible.

This is why VGA displays didn't happen until long after the Z80.

Block graphics with sprites, or 1 bit per pixel monochrome graphics, or character ROM based display modes were the order of the day. Sometimes you could switch modes between them.

Using character ROMs, the ASCII character code provided most of the address into ROM, with (scan line mod 10) providing 4 LSBs of address. So you stored ASCII character codes into a small (maybe 2kbyte) RAM, and the video controller hardware read a string of 80 from this RAM, (10 times in succession for 10 successive scan lines) to deliver 80 bytes (640 bits) per line.

The 6845 video controller was a popular device that could handle this sort of addressing and simple bitmapped graphics; it should still be easy to find a lot of information on it.

Maybe you will decide that a serial LCD display will be the one for you: - 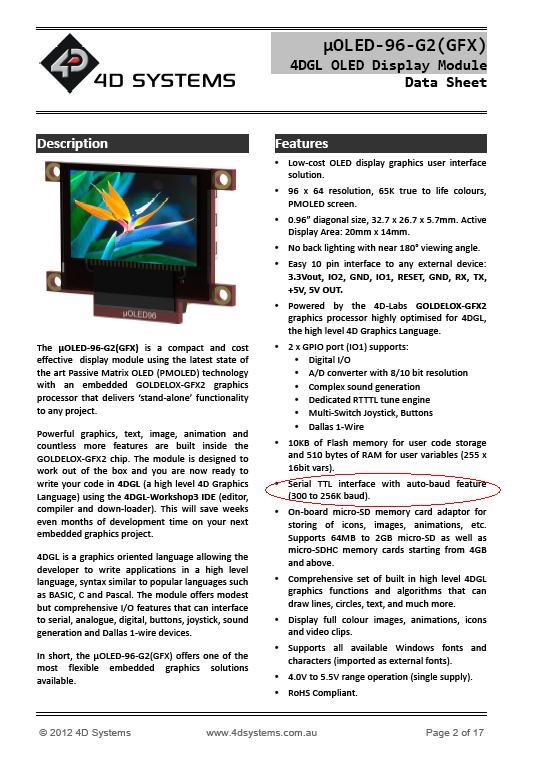 I've circled the bit in red that talks about the serial port. This is just one idea - there are plenty of LCDs that might suit. You can use the Z80 UART or DART (if they still make them and fire your info to the module.

I know this is an old question, but I am actually doing pretty much the same thing. I am designing an "80's style" console based on the Z80.

What I have decided to use is the Propeller microcontroller from Parallax. https://www.parallax.com

The Propeller (sometimes called "prop") has 8 cores that run at the same time. Each core is capable of displaying NTSC/PAL and VGA video with not much programming. It's a very capable chip and while it lacks some of the on-board hardware features of Atmel, it makes up for it in the 8 cores running 20 MIPS each (160 MIPS).

Plus the community is amazing and there have been many audio/video emulators written for it. In fact, I believe a complete Z80 is able to run on one core leaving 7 others to do other things like video and audio.

I can't recommend them enough. Especially for anything that deals with VGA or NTSC/PAL video.

Not the answer you're looking for? Browse other questions tagged ram video vga z80 or ask your own question.

3
Generation of text on composite video
3
Character mask VGA display
13
How is it possible to drive VGA displays at such high pixel clock frequencies?
2
Video RAM: How to create a shared bus for processor and VGA controller
0
Convert RGB to the composite video / S-video (math)
3
How to determine if a video signal is interlaced