Why should any unit be used instead of the watt (W) as a power unit?

I am taking a course on AC circuits and so far I have seen that for the different types of power (read real, reactive and complex) different units are used.

For the real power, which is power in fact dissipated by the system, the SI compliant watt is used. I am very much in agreement with this.

However, for reactive and complex power the equivalent SI derived unit volt-ampere is used. In the special case of reactive power, a lowercase "r" is appended.

Now, I wonder: why should any other unit be used instead of watt, if the purpose of the unit is to specify the type of magnitude of a value? Moreover, why should a symbol be appended to the unit when its use is simply that of a reminder?

Also, is there a reason why using watts for reactive power would be considered wrong?

Simply because a watt is a measure of work done. The real part of V*A is watts. There are exact equivalents in mechanical systems. \$W=\dfrac{J}{s}=\dfrac{N*m}{s}\$ so \${N*m}\$ here is Force that does work through a distance but it can also be a measure of Torque over a distance and that is static(non moving). One is the potential to do work, one is the work itself.

Using VAr - r for reactive is just short hand for the purely imaginary part, instead of using i or j (for you physicists out there).

These are three different powers therefore they have different units:

Complex power S is a sum of real and reactive powers:

where j is a an imaginary unit. This can be shown on a complex plane like this: 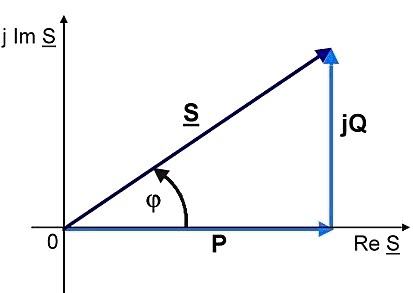 To say a 50VA transformer is rated at 50W is nonsence - the load may not "lose", "transfer" or "dissipate" any watts but it sure will be pushing the 50VA transformer to its maximum ratings.

We could then add those two together since hey, it's both consuming 7 W and 7.14 W at the same time and get 14.14 W, which is obviously incorrect, since device will never use more than 10 W, even if its power factor somehow got corrected back to 1.

Basically var is used to signify that the reactive power is not in phase with active power and that you can't add them together. On paper, power is power but by using var (sometimes incorrectly referred to as VAr, so r isn't just appended, it's part of a different unit whose name is often misspelled), volt-ampere and watt, we (at least hope to) clearly signify the context in which such unit is used. So var not only signifies magnitude, it signifies phase as well.

This is actually nothing new and is common in other fields as well. For example we have radian and steradian as measurement units for angles which are actually 1. Same thing goes for bit as well. So while we could technically say that speed of a communication link is 1 MHz, it implies different context than 1 Mb/s.

It is just a convention. It explicitly differentiates the different types of power when speaking or writing (which have different meanings mathematically, even though they have the same fundamental units).

If the different types of power are given "different-looking/sounding" units (even though VA = W), than it is very clear to a person familiar with the field what you are talking about, even if you don't tell them.

Not the answer you're looking for? Browse other questions tagged power standard units or ask your own question.

0
Why are Watt's more common than VA's?
2
Power factor correction consequences
14
Standard Volt and Ampere
5
Can this example be used for explaining the effect of lamination on power loss in a power transformer?
0
Power determination for resistive load
4
Why will the line loss decrease when the power factor increase?
0
How many watts does an electrical appliance consume?