Under what conditions should we use negative voltage? [duplicate]

It depends on the application. I'll take two examples, the first is that of the wired telephone lines from the local exchange to the Customer Premises equipment and the second being the use of an Amps for AC amplification.

But before that, I will assume that you are comfortable with the entire concept of Negative Voltage. Simply put, it's the reference point (zero) of the system being taken on the positive terminal of the battery.

Telephone Lines: The main reason lies in electro-chemical theory. Usually copper wires are used in Telephony and the lines are buried in ground. The minerals in the ground around the telephone wire can be more reactive than copper (see Metal Activity Series ), and in the presence of moisture, the electrolytic reaction corrosion of Copper (acting as Anode) into ground (impurities as cathode) when Copper is at higher potential as compared to the anodes (Ground). Now, if the Copper wire is held at a lower potential (relative to ground), this reaction will not happen. Hence, this justifies our first application of Negative Voltage. For more info on this, see this.

Now, we come to our more native (to electronics domain) application of Negative Voltage. A Push Pull Amplifier. see here for simple schematic. Now, in a push pull amplifier, usually only one of the two transistors is ON at any given time. The one connected to the positive cycle pushes the positive cycle of the AC (amplifies the positive cycle). Now, with the polarity of AC reversed in the next part of the cycle, this amplifier will not work because it is not biased for that operation. These transistors are biased to have their DC operating points near zero (because of symmetric power supplies of opposite signs). Thus during the negative cycle, only the Transistor with Negative Power supply biasing comes into play and Pulls the voltage down (thus amplifying the negative cycle). This is done to amplify large AC signals because if we were to bias a single transistor at some point in the middle of its DC Load line curve, then the range of Voltage swing that would be amplified faithfully by the transistor would be severely limited.

Similarly, in many Opamps, we need Positive and Negative Voltages for faithful amplification and operation. Negative voltages would be needed in almost all of those applications where the input voltage will have significant excursions below the negative range and we desire amplification. This is not usually the case with Audio Amps as the audio signal (base-band)usually stays above the 0 DC level.

Thus, the application of Negative Voltage is usually application specific, and the other times to properly bias the active elements of the circuit.

Yes, when you have a negative power supply current flows from supply ground to the (negative) supply output pin. (But the electrons disagree, they flow from negative output to ground.)

Nowadays I seldom see a negative supply, but a dual supply (both positive and negative) is more common, for

Using a positive and negative power supply at the same time yields a total potential voltage double to either of those voltages on their own. For example, using a +12V and -12V allows for a differential of 24V. Still, other circuits will split a signal into positive and negative values to transmit them, comparing the results at the receiver to eliminate error. This is called differential signalling and is how many communication standards such as RS-422 and RS-485 work. This is also how XLR microphone cables transmit a balanced sound signal. Many amplifier chips can be powered from either opposing sources (positive and negative) or can be clipped to either ground-positive or negative-ground.

When you are comparing a negative power supply to a common line, such as circuit ground, a it indicates a reversal of the direction of current. An example I am sure you are very familiar with is the AC power used in a house. This power source uses an alternating current (AC). Every half cycle, the current completely switches direction. At this cross over point, the measured voltage would be 0V AC. Half of the cyle, the output voltage is positive, and half of the cycle it is negative. The complete waveform is actually sinusoidal, so looking at a Sine wave gives a good idea of how that works: 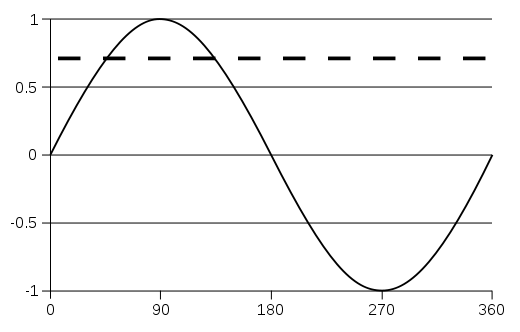 Not the answer you're looking for? Browse other questions tagged voltage analog circuit-analysis or ask your own question.

93
What is negative voltage?

0
Voltage between ground and positive / negative terminals, is this correct?
66
What is ground and what does it do?
5
Negative Voltage
0
How to interpret negative voltage in this schematic?
0
Current source from MOSFET
1
Why doesn't an electric charge use up all its potential energy travelling from positive to negative terminal?
0
terminal block voltage rating
0
Switching positive and negative voltage
1
On a 3-terminal bench power supply (+, -, GND), are there positive and negative drivers behind each of the terminals?