How does the capacitor in a debouncing circuit work?

On the following circuit (a debounced push button that turns on a LED): 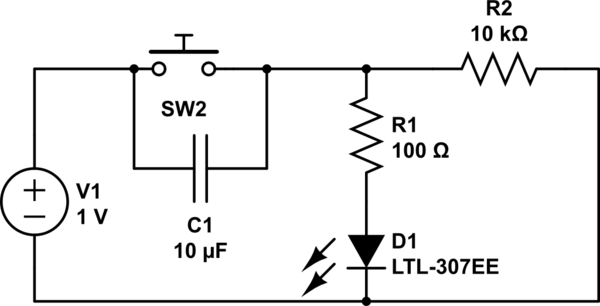 I'm trying to understand why the LED will not light up as the capacitor looks like it's bypassing the switch. When the capacitor is full, it doesn't transmit/conduct electricity?

You'll notice that I'm very beginner, but after 20 hours of reading various tutorials, I still can't really figure out something very simple; how does the full capacitor act differently than a simple wire? If I replaced the capacitor with a wire placed a wire instead of the capacitor, the light would always be on.

Edit: Some people pointed out that the debouncing circuit made no sense (bad voltage, etc.) Here's my 2nd attempt to make more sense. R5 and R6 could be the same, but I thought keeping them separate would help to keep 1 job to each component. 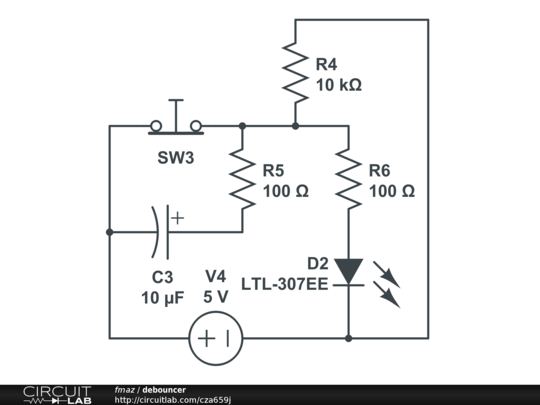 This is not a good debounce circuit.

A capacitive switch debounce should slowly charge the capacitor when the switch is in one state, and slowly discharge it when it is in another state. The RC constant doesn't have to be the same, but it should be something nonzero. The circuit has resistors that control the charging of the capacitor; it just needs a resistor in the switch loop to discharge it gracefully.

Another problem with this circuit is that the LED is only off if the circuit has been on for some time, such as if the circuit has existed since the beginning of time with that same voltage source. But what if, at time \$t = 0\$, the voltage source has been 0V and suddenly jumps to its voltage? At that time, the capacitor, which must have been empty, begins charging. While it is charging, current flows and the LED will light up briefly and then go dark. (Well, maybe not, because your source has only 1V, but that's another story).

In CircuitLab, you can distinguish these two situations in the "Time Domain" simulation. You can either "Skip Initial" or not. The solver can either pretend that the circuit has existed in the given state for all eternity until the time \$t = 0\$, and start solving it from there. Or it can solve it from the point of view that the circuit just came into existence at \$t = 0\$ and the voltage sources spring into life, the capacitors are empty, and so on.

One final consideration here is that the circuit only lights a LED, so switch bounce is basically moot, unless the LED is shining on some optical detector where the switch bounce turns into a glitch in the signal. If the LED's job is to just provide a pretty light, then your eye won't even be fast enough to see the switch bounce.

Here is a time domain simulation of the circuit (after changing V1 to 3V). What is plotted is the LED current. Important: the Skip Initial parameter is set to Yes, so we can see what happens when the capacitor is initially empty and the voltage source energizes to 3V. This is all with the switch in an open state. 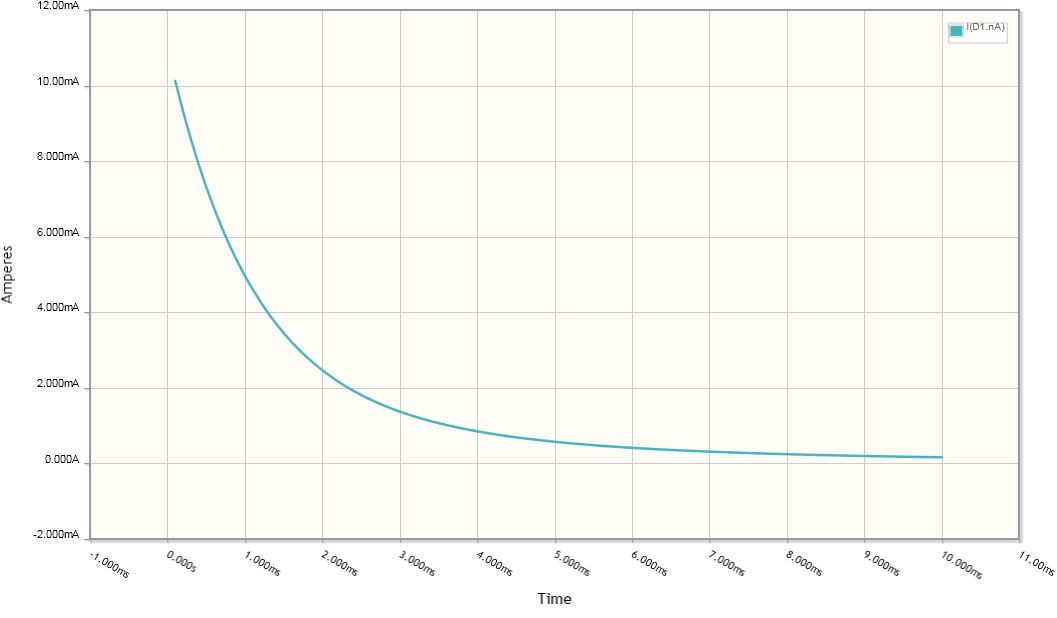 As you can see, current surges through the LED and then dies down. If your intent was that the LED is strictly controlled by the operator via the push button, then your design does not implement your intent one hundred percent.

With regard to the comment below, suppose that the aim is to actually drive a microcontroller pin (everything running at 5V). Firstly, we can do that without any capacitance and handle the debouncing in software by sampling the pin at a reasonably low rate. 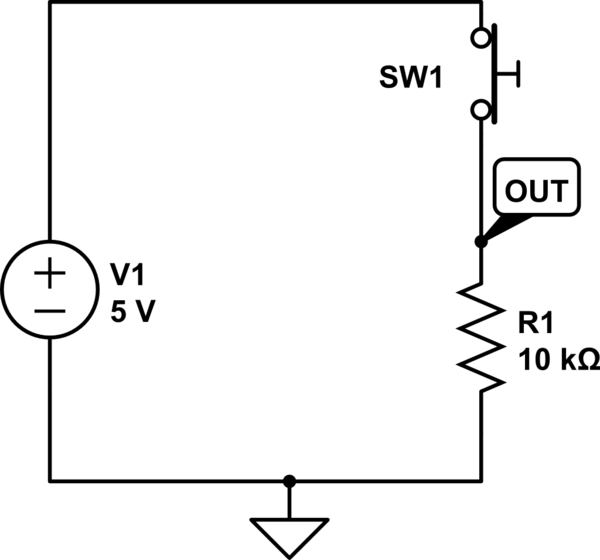 When the switch is open the output is pulled to 0V by the pull-down resistor. When we close the switch, the voltage at the top of the resistor rises to 5V. This output can be regarded as a signal. We are interested in the low frequency component of the signal: relatively slow switch presses. We want to reject high frequencies, like switch bounce. To that aim, we can add a passive, one-pole RC low-pass filter:

Now when the switch closes, the voltage rises gradually as the capacitor is charged. You can see this in the time domain simulation:

The microprocessor input senses the voltage with high impedance, so we can ignore its loading effect and not even show it on the diagram. We cannot do this in the case of the LED because it requires current which our circuit must supply. That current flows through our resistors and develops voltages that we must account for: in other words, it has "loading effects".

This type of circuit works even better if we feed the output to a Schmidt trigger. A Schmidt trigger is a kind of buffer for digital signals which shows hysteresis similar to a thermometer. Its output goes high when some high input threshold is exceeded, and falls low when a different low threshold is exceeded. For instance, it might go high when the input goes above 3.5 volts, and only go low when the input falls below 1.5.

So even if the capacitor allows through some noise that could still cause some small flipping back-and-forth near the crossing of an input's threshold, the Schmidt trigger will reject that.

Suppose we want to debounce the LED with a capacitor? The problem is that the resistances end up being too low due to the need to supply current to the LED. If we just use the same circuit and make the resistors smaller (and the capacitor larger by the same factor), we end up with something which wastes power. The way to do this is to use a small signal loop to handle the switch, and debounce it, and then use the voltage to control a transistor which dumps current into the LED.

Though debouncing a LED might be useless, if we make the resistors and/or capacitor large enough, we can obtain a nice behavior: that of the LED slowly fading on when the button is pressed and held, and fading out when it is released. 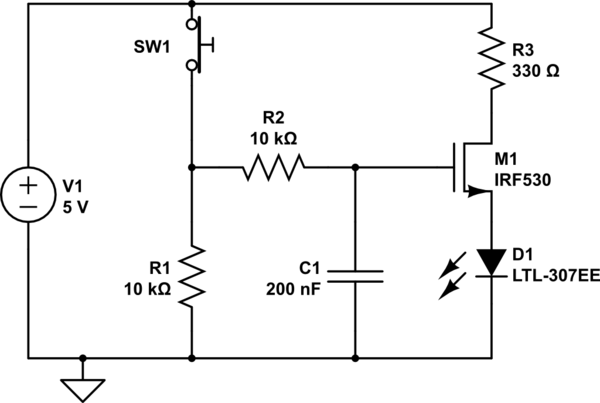 This is the same circuit as before: the "out to microcontroller" node now connects to the base of an n-channel MOSFET which drives current to the LED. The MOSFET "buffers" the debounce logic from the LED driving. The debounce circuit isn't disturbed by the low impedance of the LED, and the LED is not starved of current by the high impedances in the debounce circuit.

This effect occurs because at steady state a capacitor effectively blocks any current from DC voltages. This can be seen by understanding the equation

At DC the differential term is 0 so the current is 0. Therefore the current through the capacitor will be zero at steady state.

If you take that for granted it should be fairly obvious why this circuit works. If you want even more detail than that, then this video will probably do a better job of demonstrating how the physics of a capacitor play out to yield the result above than my description could.

A capacitor can, for many purposes, be considered as a very small rechargeable battery. It will only pass current while charging or discharging.

Most LEDs require at least 2 volts to light - for your circuit to work at all, the voltage source should be at least 3 volts. Then you might see the LED continue to glow for a fraction of a second after you open the switch, as the capacitor charges.

Yes. It's not a wire, it is (like the symbol) two parallel plates close together.

8
Differences between Interrupts and sampling for hardware button?

10
Capacitor behavior in oscillating circuit
4
Howto discharge a capacitor through an LED by removing the power
5
Modelling a capacitor whose dielectric has resistance as a circuit element
0
Does a capacitor discharge and recharge in a loop while power is going through it? or only when power is cut off?
1
When wiring a circuit with a capacitor why does the electricity go to the capacitor first instead of bypassing it?
1
How would you all implement a simple delay of a signal?
2
Phototube experiment with op amp
6
How to determine value of a smoothing capacitor