Why can I put an electrolytic capacitor on AC?

I have seen here and there schematics with electrolytic capacitors put on AC. And this sounds weird to me.

Electrolytic capacitors have a polarity, right? If we invert the polarities on DC, bad things happen. As far as I understand, AC inverts polarity every now and then (commonly 50Hz). Why can we put such capacitors on AC without damaging them? 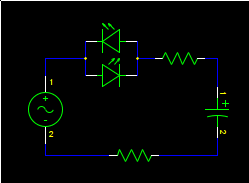 "Can" and "should" are two things. Should you do this? No: this use is outside the specified operating parameters of ordinary electrolytic capacitors. You seem to understand this already. Can you do it? Yes, as the video demonstrates. To understand why requires some understanding of what's inside the capacitor.

A capacitor is two conductors (usually plates) separated by an insulator. The more surface area, and the closer together they are, the higher the capacitance. Electrolytic capacitors have a thin film rolled up in the can. This film is covered in a thin oxide layer, and the thinness of this layer is what gives electrolytic capacitors their high capacitance relative to their size.

Usually, when you encounter this failure mode, a large current flows, rapidly heating the internals of the capacitor. The expanding fluid and gas ruptures the safety vent or the can explodes.

Why then, does the capacitor in this example not explode?

The oxide layer doesn't dissolve instantly when a reverse voltage is applied; it takes time. The time depends on the voltage applied, the size of the capacitor, the chemistry, etc, but half a cycle of 50 Hz AC is probably not long enough to cause serious damage. When the other half of the cycle comes around, the oxide layer is restored.

Any fault current is significantly limited by the series resistors.

Probably you still damage the capacitor eventually, to some extent, but it is operational enough for the demonstration.

Most likely you are not noticing that the capacitor has a DC bias and that the lowest peaks of the voltage accross it don't go negative.

In the only example you provided, there is a LED in the circuit. Remember that a LED is also a diode. When he put the capacitor in series with the LED, it should have prevented significant reverse voltage accross the capacitor. When the capacitor was put parallel to the LED, the LED would have shunted anything more than a couple of volts reverse polarity around the capacitor.

More importantly however, this was just some video from some guy on the internet doing a demo and not trying to be rigorous. He may well have been aware the capacitor was being abused somewhat and didn't care. We also don't know whether the capacitor eventually suffered some damage.

So in summary, the reasons you are seeing electrolytic capacitors apparenly being reverse voltaged are:

There are a couple of possible answers.

Second, there is such a thing as a non-polarized electrolytic capacitor that is sometimes used in powerline-frequency applications. It has oxide layers on both plates.

Why can I put an electrolytic capacitor on AC?

You can but it will damage the capacitor, possible fatally, except in trivial cases.

The example shown does not prove much at all.

If you apply a modest reverse voltage to a capacitor compared to its voltage rating it may not do too much damage if not too much current flows and if not done for too long.

Small amounts of damage done in such cases may not be apparent.

For excessive values of modest, too much, too much and too long the capacitor may let you know in various interesting ways such as blowing all its insides out through the base seal, or through the safety vent formed by the cross shaped grooves on the top or just by boiling or drying out or refusing to come to the party in future.

One way in which electrolytic capacitors can be used in an AC circuit is to put two in series polarity-opposed. Each capacitor will tend to "deal with" the appropriate part of the waveform. The reverse biased capacitor will pass much current at low reverse voltage and use the other half to block forward voltage DC. In this case the "too much" limits are not reached.

In the video clip included we do not know the output voltage of the transformer, the type of LEDs used, the resistance values of the two resistors, or the ratings of the electrolytic capacitor being tested. Freeze framing and contrast expanding it looks like the cap is rated for 35V, is clearly polarized, and might have a capacitance of 200uF.

The LEDs appear to be common, small, red LEDs which typically have a forward current of 20mA. Even freeze framing it is difficult to read the values of the resistors and there is no way to read the transformer output RMS voltage. But assuming that the resistors were chosen to produce the proper 20mA current for the LEDs, and that the LEDs are wired parallel, reversed so that current can flow in each direction it is possible to build a spice model to approximate what the video clip's circuit might have been.

Assuming the total series resistance of the two resistors (can be modeled as a single, series resistor) of 200 ohms and the transformer 5V peak to ground we get a current of 18mA. If the capacitor really is 200uF, then a 50hz waveform with a peak of +/- 18mA is not capable of fully charging the cap. 50hz is 20msec for a complete cycle, 1msec for each positive or negative half cycle.

Each 10msec negative going half cycle is less than 1/4 of the RC time constant. Using a forward parallel (leakage) resistance typical for a 200uF cap of 2K ohms, and adding a reverse parallel resistance that is much worse of 250 ohms using an ideal diode and resistor in parallel with the cap shows why there was no damage when running a DC cap in an AC circuit. The peak positive capacitor voltage in the simulation was only 280mV, while the reverse voltage peak with the greater leakage current only 180mV.

With the negative voltage peaking at less than 1% of its rated forward voltage the oxide layer was never in any danger. When the capacitor was hooked up in parallel with the LEDs the voltage across the capacitor never got high enough to allow the LEDs to work, and unlike the series configuration, there was no charge/discharge current going through them. With the current limiting resistors still in series with the capacitor it was not able to charge up to dangerous levels, especially when reverse biased.

If the LEDs had been given a separate series resistor to limit their current and the capacitor in series with a much smaller resistance such that the 50hz half cycle time was several RC time constants long, then the capacitor would have reached nearly full negative voltage and probably fail very quickly. But limited to the LED safe current it could not begin to charge up before the voltage reversed and so was not in any danger.

Not the answer you're looking for? Browse other questions tagged capacitor ac or ask your own question.