This question mentioned that pin 13 has a built-in resistor for the LED that comes standard on most Arduino units. A friend of mine told me that because there's already a resistor on the pin, I don't have to put one on when I plug an external LED into the pin.

This doesn't sit right with me, as I read all over the place that it's very bad to plug in an LED without a current-limiting resistor. I can't find where pin 13 is on the circuit diagram (still getting used to reading those), so I don't know how the built-in resistor is wired.

EDIT: As Polar pointed out below, a single resistor would do the trick. However, I'm really curious as to the positioning of this single (built-in) resistor. If it's in series with the header for P13, then it should limit current. If it's in parallel, I don't think so. However, my electronics knowledge isn't that vast, so I could be mistaken...

If you examine the schematics for any of the Arduino boards (other than the Arduino NG Revision C, which does not have an on-board user LED), e.g. the one for the Arduino Uno, the pin has a resistor and then the LED wired off it to ground, in parallel to the actual output pin header. 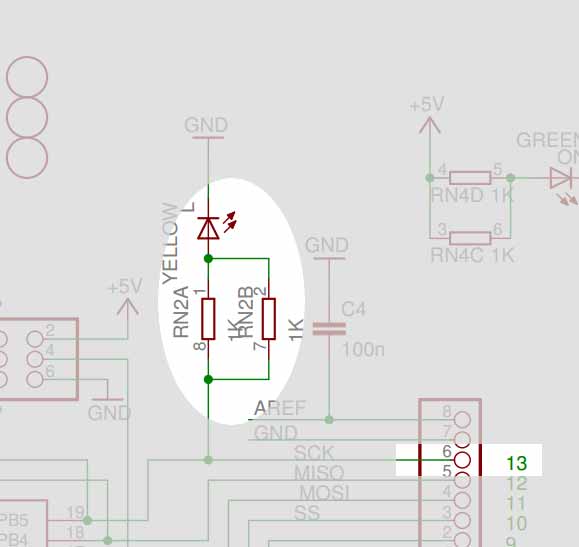 Thus, if you do not use a separate resistor in series to your own LED, there is a fair chance of damaging your LED.

Thus, yes you do need a resistor for your external LED.

Only the very early boards had a resistor on pin 13. The numerous tutorials out that there that still claim pin 13 has a resistor are just flat out wrong. No recent (well over 2 years now) Arduino has a built-in resistor on Pin 13.

A series resistor will drop the rest of the supply (or pin) voltage and limit the current running through the LED.

For higher power LEDs you would probably want to use a constant current supply so that the series resistor isn't just wasting power.

Not the answer you're looking for? Browse other questions tagged arduino hardware pins or ask your own question.

11
Is there any difference between pin 13 and the rest of the pins?

6
Arduino - pin13 is HIGH by default
7
Arduino Question regarding the resistor
5
Using single resistor to receive 5v signal on the 3.3v rated pin
8
How much current can a 0.1" pitch pin header pass?
0
LED Cube with no transistors
0
Does my IR LED need a ground?
1
Can I connect DTR Pin to CTS Pin?
2
Can I plug in too many LEDs (i.e. 26) on Arduino UNO?