How does this LED setup work?

I noticed this LED setup in a datasheet for the Kingbright SA40-19EWA. Instead of the leds being in a simple series or parallel setup, each segment of the display has four sets of two leds in parallel, but each set is in series. 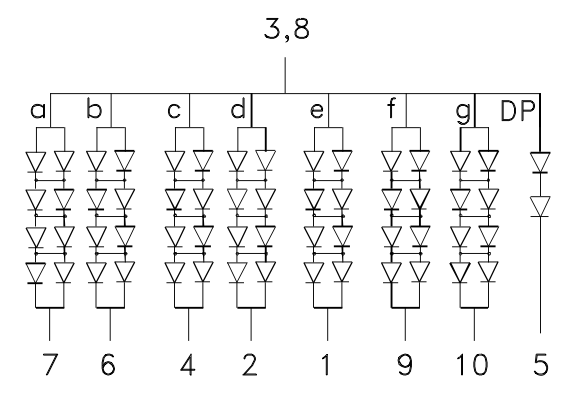 I know the lights work, but don't have one of the displays to cut up to confirm that they are actually connected like this. I'm not asking for how this specific part works, but generally, can this wiring setup, as presented, actually work? How does the current flow, how would the voltage drop be calculated? I know some of the users here have simulation software, maybe they can confirm if a simulation of this would work?

Placing LED's in a parallel-series combination like this is a technique to average out the brightness given constant voltage. It helps present a more even looking illumination cheaply (as opposed to active constant-current circuitry).

The Q-point of the two LED's in parallel will be determined by the voltage assigned to the pair by the current allowed through the 4 series steps.

However, in your case the parallel combination is itself in series.

That means that I1 + I2 = Ip is the same for each parallel pair of diodes in the same string.

In the case of LED's in the forward region, brightness is almost linearly related to current. So holding Ip constant gives you approximately the same amount of light from the pair of diodes even though it is difficult to know how the light output will be distributed between them.

Extending this to the string of pairs, you cannot find a closed form solution (I might be wrong, but I don't see one) so you would need to solve it iteratively (I like Newton-Raphson) like SPICE does.

Not the answer you're looking for? Browse other questions tagged led current simulation or ask your own question.

6
Why do some DC-powered LED circuits flicker?
0
LED RGBW Lighting, Will this Design work?
3
How are multi LED flashlights wired to control current w/o resistors or regulator?
5
How does this transistor dual LED flasher circuit work?
0
LED spot flickering problem
0
Resistor after LEDs, is this right?
4
How to replace a green LED with a red one in a simple transistor switch?
0
Why is there no resistor in a christmas LED string light?
2
How does this LED string work?
1
Emitter follower for parallel LED switch