I was measuring voltages in my circuit, and noticed something strange. I have an array of 8 LEDs. Each of them is in series with a 220 Ohms resistor. The circuit has a 5v source. 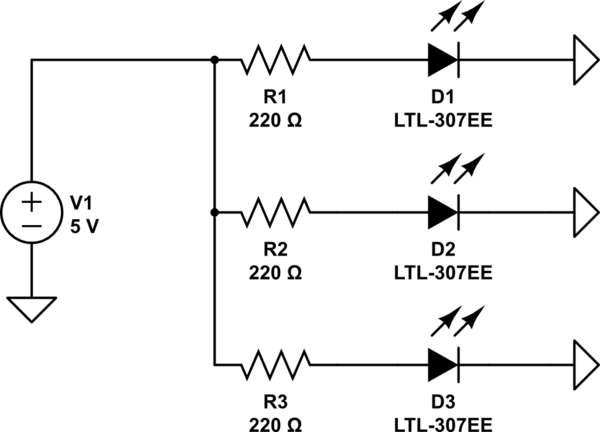 The LEDs are all the same model. They all have ~1.90v across them. All but one, which has ~2.1v. At the same time, that LED has an inferior brightness. I can interchange this LED with another anywhere in the circuit, and it still behaves the same.

Is it normal / usual ? Does it mean I burnt it somehow or made a mistake in my circuit ? What's with the inferior brightness when it drops a higher voltage ?

If there is a higher voltage across that LED, than it is drawing less current because the voltage across the 220 ohm resistor is less (5- 2.1 or 2.9 volts compared to 5 - 1.9 or 3.1 volts across the other 220 ohm resistors. Thus it is drawing 2.9/220 or 13.2 ma while the others are drawing 3.1/220 or 14.1 ma. Generally, LED brightness varies in step with the current through it. That being said, the difference between 14.1 and 13.2 is not much so that the brightness difference shouldn't be that much. Do you have the specs on the LED? It may be perfectly normal for that particular LED to have that variation of voltage drop. I don't believe you damaged the LED nor have any circuit errors.

Variations in manufacturing can lead to parts that act slightly different. Component matching cost more, and even then, a given batch is not tested 100%. A statistically significant portion of the batch is selected, pass/failed based on target specs, and then labeled according to actual performance.

This happens with pretty much all types of devices. Some, like resistors, are more obvious. They come with certain tolerances, the average resistor being within ± 10% of it's given value (so your 220Ω resistors might be between 198Ω and 244Ω), with more expensive ones coming in ± 5/1/0.1%. Leds are just as likely. You will find that led drivers (Like the TI TLC5940) have options just for this situation, called Dot Correction. From App Note: TLC5940 dot correction compensates for variations in LED brightness

Dot correction is a method for managing pixel brightness by adjusting the current supplied through each individual LED in the array. The dot correction feature enables the processor to control full current to a panel of LEDs while the LED driver scales the current to each LED and creates uniform brightness. ... To implement dot correction, manufacturers measure the brightness of individual LEDs through photo capture. The dimmest LED in the system is designated as the “base” LED to which every other pixel is matched.

Not the answer you're looking for? Browse other questions tagged led voltage or ask your own question.

5
Powering 17 meters of RGB LED strip - Worried about voltage drop and wire size
2
Brightness issues driving 10*11 SMD 5050 LEDs matrix
29
Why are the three component LEDs in an RGB LED so unbalanced?
0
Why many (resistor - LED)s connecting in parallel, current of each LED is not stable?
14
LED forward voltage is a range, so how do you calculate resistor value?
0
LED modulated @ high voltage -vs- constant @ low voltage
1
LED dims when MOSFET switching at a higher speed
0
“Amplify” LED-Controller to handle higher currents
0
Higher brightness LED with bigger resistor to save battery life
0
Why is there no resistor in a christmas LED string light?