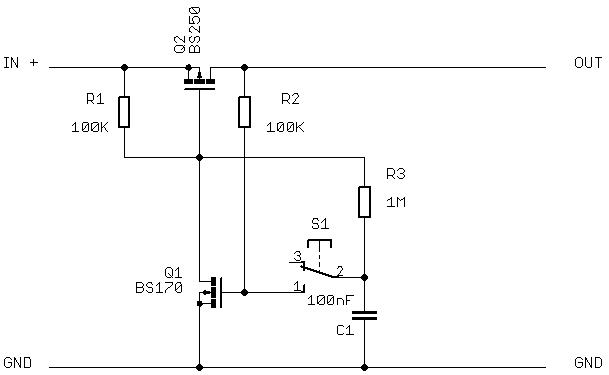 The P-MOSFET I am using is the IRF9510, which is rated up to 100V and 4A. The voltage regulator doesn't ever pull more than 2A to handle its switching circuit.

This non-working set-up has strange behavior at the output of the voltage regulator. Upon clicking the button in the switch circuit, the voltage out of the regulator will spike to about 1.3V and then slowly decay down to 0V. This decay takes at least a minute or two, which has me thinking that this issue has something to do with the fact that the load is capacitive and that is why the switch won't latch. I am wondering whether this is a result of the switching circuit within the voltage regulator circuit, or due to the input/output capacitors to the regulator circuit. For all I know, it could be malevolent fairies who don't want my circuit to latch.

I don't think the problem has to do with the P-MOSFET being unable to handle the current that the voltage regulator wants to pull from the battery, and I know it isn't the battery's discharge rate that is somehow limiting the current into the circuit. I also don't believe it is the N-MOSFET's current limitation in the switching circuit causing the problem, because I don't believe that component ever receives an excessive amount of current or voltage.

I am a relative n00b when it comes to electronics, so any help would be much appreciated. I can provide more info if needed.

I'm not an expert, but I think your problem is your weak 1M pullup R3. Until your soft latch switches on, the load circuit will be acting as a pull down through that 100k and it might keep the gate low.

If you have capacitor on output of this latching switch, it doesn't work. And DC/DC converter has capacitor on input. You must place 10k resistor as load first on output of this switch and then also put diode to + wire and then connect something what you want to control by this switch. Capacitor hold voltage up after switching action and R2 in this circuit then doesn't work like it should.

Not the answer you're looking for? Browse other questions tagged batteries voltage-regulator latch or ask your own question.

5
Why won't my 2 x NPN circuit latch?
1
How to restrain this soft latching power switch from eating too much current?
0
Soft-latch auto-reset OFF (hold) / ON (press) button, is the schematic correct?
0
How soft latch power switch in this specific circuit is possible?
0
Bi-directional on/off toggle soft power latch
0
Car soft latch circuit auto triggers
0
Capacitive moisture sensor and need of voltage regulator
2
Soft Latch ON-OFF with support of DC High Voltage side, compatibile with Arduino or any Low Voltage MCU (with schematic)