TXERR error in CAN communication

I tried CAN communication using PIC18F25K80 and MCP2551. Using two nodes, I could transmit data from one node to other. But, data was transmitted only when the receiver buffer was set to ignore all errors and both the nodes were configured in 'Normal mode'. And, then I configured the receiving node in the 'Listen only mode' and data was received even when the receive buffer was set to 'Receive all valid messages as per the EXIDEN bit in the RXFnSIDL register'.

But, as the TXERR and IRXIF bits were set in the transmitting node, TXREQ bits was not cleared and the message was continuously sent. What could be the reason that causes these errors?

(I have used the internal RC oscillator set at 64 MHz and the baud rate was set as 100 kbit/s.) 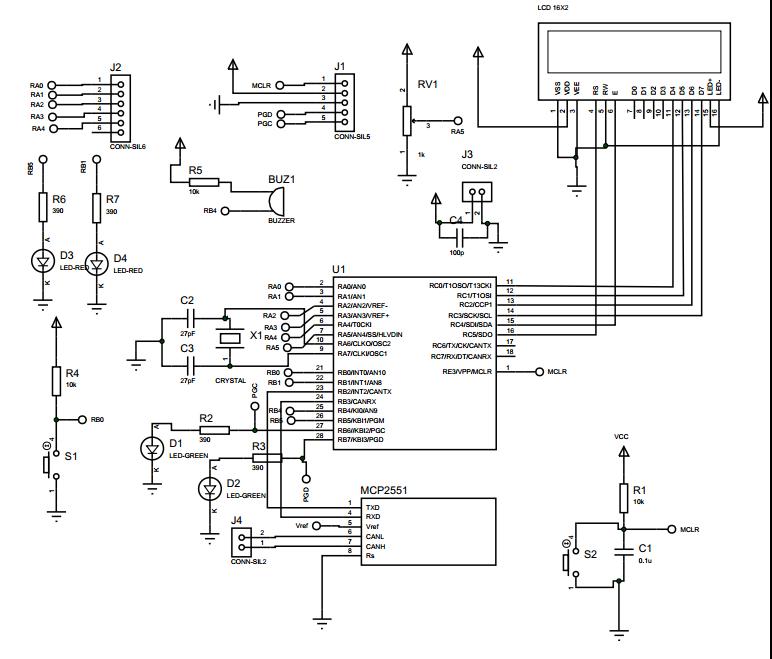 CAN bus should have at least TWO active nodes. CAN Transmitter considers a transmission successful only if it gets ACK.

When you configure a node in "Listen Only Mode", it recieves data but doesn't Acknowledge it. As there is no other node on bus, Transmitter doesn't get any ACK and hence Error.

Try connecting one more active node on bus and do same experiement. As far as my Experience, You will not get any errors.

As Martin says, lack of proper terminators can certainly be a problem. However, R-C oscillators are generally not accurate enough for CAN. Usually you need less than 1% mismatch, which would imply .5% accuracy at each end, which the internal oscilators of these PICs isn't going to give you. Try with a crystal driving each PIC and see if you still have problems.

By the way, I have used the 18F25K80 and MCP2551 in numerous designs and never had a problem. However, I used a crystal each time.

Another problem is now apparent, which is that you may not have a common ground between the two nodes. Of course this is important. The CAN lines as driven by the MCP2551 are differential, but are still directly connected. As such, they have a limited common mode range. Both lines float at about 2.5 V when in the passive state. In the dominant state, each line is pulled about 900 mV from the idle level. The MCP2551 can tolerate a reasonable amount of common mode offset on receiving, but of course it needs the lines to be fairly close to the nominal values when transmitting. Such CAN systems require a ground connection. In this case, CAN is a three-wire bus: CANH, CANL, and ground.

Most likely it is due to not terminating the cable at both ends with the 120R resistor. If that has been done and there are still problems, make sure you have set the same baud and other CAN settings at both ends.

Not the answer you're looking for? Browse other questions tagged can error or ask your own question.

8
CAN Transmission and termination resistors