We have a MOSFET that drives a load. The load has a sense resistor in its current path and its voltage is used to trigger a circuit that can disconnect the load if we detect an over current condition.
But it wasn't that easy. Many kinds of loads generate large pulses when connected (input capacitors, etc), so temporal overcurrents can actually trigger the latch, so we fed that current sense voltage into a capacitor. It looks like this: 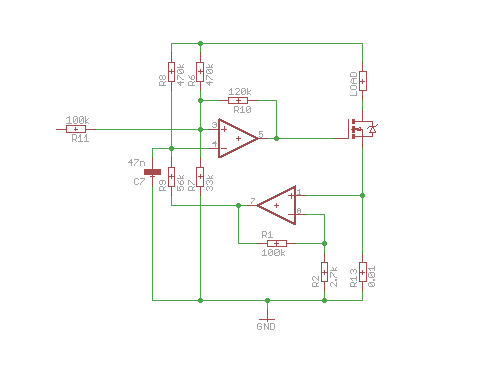 The issue is that higher currents will kill the MOSFET (and other existing circuitry) exponentially faster, while higher voltages (from the current sense) will change the capacitor less than linearly faster.
If we tweak the value for a reasonable current/time to trigger the latch, a higher current will take too long, while tuning for a high current will overshoot at lower currents.

We have been thinking about using a thermistor instead of a capacitor (right response curve) but they all seem to be too slow for our case (at 200A we have about 40us to shut off). Now there's an idea of using an integrator op-amp to measure current*time...
Does any of that make sense? Is there a industry standard practice for this sort of case? This can't really be this complicated, it feels like it should be a common issue... can it? Isn't it? :)

Our issue is not about the components (whether the op-amp will be able to drive the MOSFET at X Amps), it is about triggering in 'this is too high too long' rather than on 'high current but short and okay' situations. I've removed the device names accordingly :)

operational-amplifier mosfet safety short-circuit
|share|improve this question
edited May 10 '13 at 13:43
Rodrigo Lopez
asked May 9 '13 at 20:46

The underlying problem description suggests a possibility of a low-tech solution rather than the high tech path. This is not to say that the mentioned integrator based approach won't work, of course.

Basically, how about two current limiting mechanisms in series:

This way, impulse currents such as for capacitor charging at start-up would get through, so long as they are under abs-max, while "slow-fuse" overcurrent protection would be in place for normal operating conditions.

Rather than using a current sensing resistor, I would suggest that you instead monitor the voltage drop across the MOSFET and compare it with a reference signal that indicates how much the MOSFET is allowed to be dropping at any given time. When the MOSFET is not enabled, it should be allowed to drop the full supply voltage (indeed, that would be expected). Once it is enabled, its voltage drop should fall fairly rapidly, though exactly how rapidly will depend upon the nature of the load to which it is connected. If the voltage drop on the MOSFET doesn't follow something resembling the proper profile, that would indicate a problem and should trigger a system shutdown.

I agree with others that you should have a MOSFET gate driver between the gate and IC2B. A very slow gate turn-on with heavy drain current can cause you significant turn-on loss, since the switch is not saturating quickly. A very slow gate turn-off negates any attempt to do a 'fast' overload shutdown, since the gate capacitance will take a finite amount of time to discharge (not to mention power dissipation during the slow turn-off).

I really suggest using a MOSFET driver IC, one that has several amps of turn-on and turn-off capability. If you don't want to go down this route, you can at least implement a fast turn-off using a PNP transistor and a diode and see if it gains you anything. 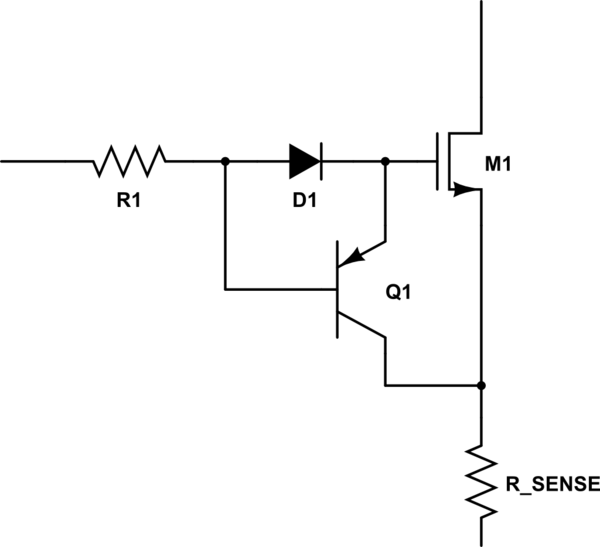 I've never done this. But I think I understand your question, you want to have suitable response times for both fast high current and moderate over current conditions.

Well, the first compromise in your model is power vs current. The heat going into the chip is I^2, but you are measuring just I. But you don't need precision, just good limits, so here is a simple 2 tau circuit: 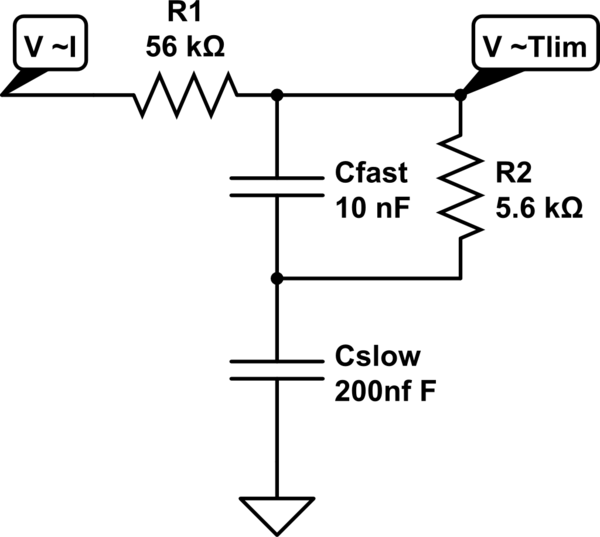 I pulled the resistor and capacitor values out of my hasty hat, you will want to tweak them to the desired response.

Not the answer you're looking for? Browse other questions tagged operational-amplifier mosfet safety short-circuit or ask your own question.