ratiometric ADC, is it feasible to separate reference voltage and excitation voltage by an amplifier

I have a variety of bridge transducers (pressure, strain gage) with sensitivity of 1mV/V. Also, most 24-bit ADCs and analog frontend chips have a PGA with programmable gain between 1-128. This means that at the highest gain setting, the maximum output is only 12% of full-range. In other words, the ENOB of the ADC reading is decreased by 3 just as a result of insufficient gain.

Recently I noticed that some ADCs allow a reference voltage significantly less than the excitation voltage of my sensors. Is it feasible to, for example, reduce the reference voltage and then use a non-inverting op-amp with 4x gain to supply the transducer excitation voltage? As far as I can tell, I will still have all the benefits of the ratiometric connection, with only slight degradation in noise performance (due to the ADC performance with reduced Vref... the closed-loop output resistance of the op-amp and its input voltage and current offsets appear to be negligible in this scenario) in terms of noise bits -- but the increased resolution more than compensates for the increase in noisy bits. As a bonus, this can separate the excitation voltage for each channel, so that e.g. a short circuit in one transducer won't interfere with excitation of the others.

I believe I can get very good gain accuracy by using a chip bussed resistor for the feedback -- this way the feedback resistors will be exceptionally well matched to each other and also be thermally-linked, so the feedback won't vary with temperature either.

If this works, any ideas why this arrangement doesn't commonly appear in example circuits? 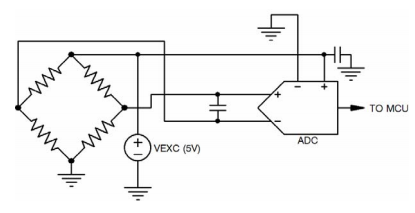 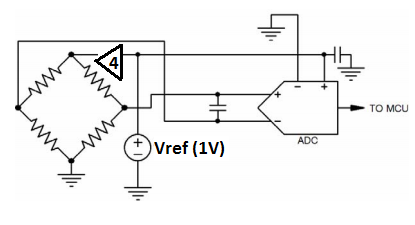 Where the amplifier block looks like (pay no attention to the op-amp model number, it's what CircuitLab supports) 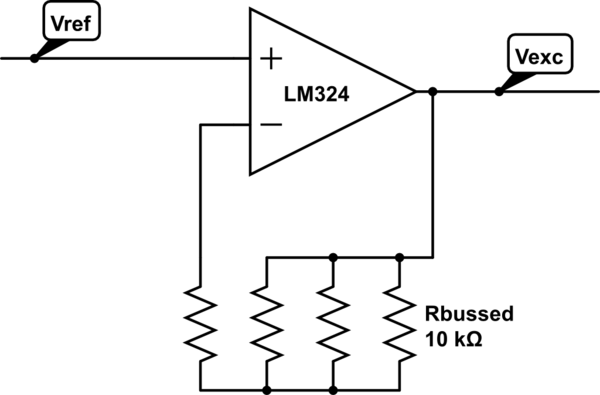 It certainly looks feasible, but first make sure you NEED to do it. The 24 bit ADC gives you an awful lot of dynamic range that you don't need, and plenty of bits to spare. You often use them to sample small signals without worrying about preamplification.

So, work out your noise budget, figure out how many bits you need, and do what you need to get them. Try to remember that an engineer who consistently exceeds specs instead of meeting them is wasting time and money.

Amplifying the reference to get a higher excitation signal is feasible.

Another option. Start with a high reference voltage, which goes straight to the sensor. Connect the A/D Vref through voltage divider.

You would introduce some error because of resistor tolerances. That can be taken of by calibration.

edit: Have a look at p.36 of AD7719 datasheet (rev. A). There are tips on how to make bridge pressure sensor measurements with Σ-Δ A/D.

Not the answer you're looking for? Browse other questions tagged adc voltage-reference transducer or ask your own question.

8
How to create a noise budget and what to do with it afterwards?

8
How to create a noise budget and what to do with it afterwards?
1
Trade offs between adc range and amplifier gain design
0
AD620 voltage noise and ADC SNR calculation
1
Is programmable gain amplifier(PGA) in ADC enought to get me precision
8
Unexpectedly poor DNL, INL and ENOB on an ADC
1
ADC: μV measurement and noise
0
Loading reference output of an ADC
0
Vref value and Vref shunt ICs for an ADC
1
Op amp to supply current to 3 thermistors and an ADC voltage reference input