I build these music sequencers. 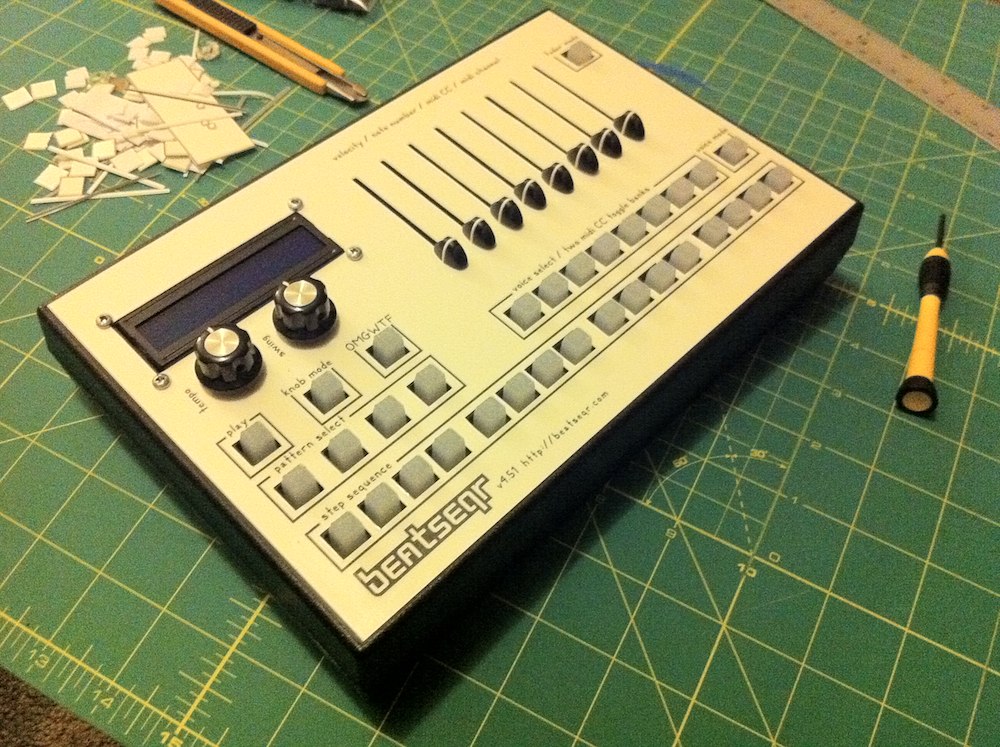 Only it's not exactly a sequencer, it's a physical interface for a sequencer. The sequencer is an application that runs on a laptop that the sequencer connects to, this thing lets the user make drum loops on the fly. It's pretty fun, but it requires a laptop because the sequencer isn't 'on-board'.

What I would love is to do the sequencing on-board my device.

Now let's assume I know how to solve for class compliance for USB MIDI connectivity, and let's also assume I can figure out how to wire up an arduino to send MIDI notes from a 5 pin DIN port. What I'm most concerned about is tempo drift over time due to inconsistent timing in minute amounts over every run of the event loop.

Some things I know:

A. Is the AVR-based arduino an appropriate microcontroller to poll a user interface and run a mission critical timing loop? I know there's an ARM based Arduino now that's a lot faster. Would a Teensy 3.0 be a better alternative? Both of these are 3.3V boards, so that's another set of issues to work with... but I'll ignore that for now.

B. Should I split the task into two microprocessors? One to handle polling and updating the user interface and one for mission critical timing loop.

My main goal is to not have to use a computer at all. I also want to calculate for swing, but in this case, swing don't mean a thing if I ain't got a locked and timing accurate tempo. Thanks for your advice!

Interrupts are your friend for timing sensitive tasks, but only if you put the timing critical aspects into the interrupt, and there are no other interrupts happening that have a higher priority. The microcontrollers on the "AVR-based" Arduino (e.g. the ATmega328P) have fixed interrupt priorities as detailed on page 58ff of the datasheet. So if you used TIMER2 COMPA as your critical timing interrupt and no other interrupts you should be OK (as it has the highest priority). If you also want to use lower priority interrupts, you need to make sure that all of them re-enable global interrupts when entering their interrupt service routine:

When an interrupt occurs, the Global Interrupt Enable I-bit is cleared and all interrupts are disabled. The user software can write logic one to the I-bit to enable nested interrupts. All enabled interrupts can then interrupt the current interrupt routine.

This is slightly different on ARM based Arduinos as their Cortex-M3 core has a "Nested Vector Interrupt Controller", where the priorities aren't fixed (can be set in software), and nested interrupt handling is the norm. So for timing critical applications, the ARM based Arduino would give you more flexibility. However, I don't think that's really necessary for your application.

The bigger question is really how easy these things can be implemented with the Arduino libraries. To get the best performance you will probably have to code outside the libraries to some degree, at least for the timing critical bits, i.e. avoid things like delay() or millis() altogether.

Whether or not you need to split depends on how much processing you intend to do. Again, going outside the libraries can potentially give you better performance.

This can, with the appropriate programming, most definitely be done on an ATmega328P (depending somewhat on the drum-loop's complexity. I'm assuming ~<50 drum events in the loop. Is that reasonable?).

Note that I said ATmega328P, not necessarily an Arduino.

The Arduino environment has a lot of default stuff going on in the background, that makes extremely deterministic programming (as you will need for something timing-critical) challenging.

While I'm quite confident it's possible to do everything you want on a single ATmega (drum loop, multiple analog inputs, LCD, buttons, MIDI interface), the real question is how much work will it be to squeeze everything in? Again, do you want to learn to optimize embedded MCU code, or build instruments? It's quite easy to simply go to a faster MCU if needed, but you need to determine the MCU performance you need now, so six months of work in, you don't realize you can't quite get everything to work as fast as you need.

If I were you, the first thing I'd do is get it working without arduino stuff (basically, treat it as a raw ATmega, and use AVR studio or similar). Then, you can much more effectively analyse what kind of performance you need, and if the ATmega can manage it.

Once you're free of the arduino stuff, you're much more free to use different MCUs (they're generally more similar then different. If you can figure out one from it's documentation, you can probably do the same for others).

I've been working with the ATxmega devices a LOT recently, and they're really nice. You get three interrupt priorities, which make managing time-critical stuff waaaay easier. They're also really nice to work with (Sane peripheral designs! Convenient port structs! Etc...).

There are also the LPC devices from NXP, which are ARM based, as well as some of Atmel's ARM devices (as used on the Arduino Due), or the STM32 MCUs from ST. Any of these will have significantly more performance then an ATmega, or even an ATxmega.

The primary downside of a bigger, more powerful processor is price, but unless you're making thousands of those units, the per-unit assembly and manufacturing costs are so greatly going to exceed the cost difference (which will likely be only a few dollars) that it's basically irrelevant.

I needed to read up on timers before I started thinking about timing accuracy (also building a midi step sequencer with an arduino, although it's guaranteed to look less cool than those^^). This series of articles has been the most informative:

Right now I think that my solution to getting precise timing will be.

A. Use the AVR arduino

B. Keep the task on one microprocessor

C. Wisely use prescalers, timers and interrupts to get the precision that's needed.

Using the basic midi tutorial for Arduino and after looking at this article on timers and prescalers, the following code is what I came up with. The code uses timer1 and CTC mode to play a midi note on every quarter second and a note off every quarter second (which should be exactly 120 bpm). Sadly, this is still coming in just slower than 120bpm though this is the closest I've gotten...

I've been struggling with this for ~ 24 hours now and finally got some answers from the forum. I think that the code that I used above ^^ is pretty good. Using the ISR, using the CTC mode and prescalers etc. After reaching out to the forum I think that the solution is less about attaining precision on the midi sequencer, but getting my whole hardware setup (my synthesizers and samplers) hooked up to the same midi clock, whether or not the clock comes from the Arduino.

Depending on how gradually you want to make the transition from a tethered computer to a µC-based system, you might consider putting a Raspberry Pi inside that box ($25-35 retail). That way you can have a full (albeit low-powered) linux-based computer with USB ports and GPIO pins.

3
Converting old organ keyboard to MIDI
8
Sensor Polling via USB-RS485 Serial Interface stuck at 16ms, even though it should be faster
2
Arduino: Delay of 1ms necessary between Serial.read and Serial.write?
8
Arduino serial communication protocol design
4
Hardware based MIDI decoding / synthesizing
1
PIC32 UART buffer overrun in MIDI receiver application
3
Using a MIDI connector both as MIDI In and Out (not simultaneously)
2
MIDI source selector switch
0
Best Arduino for Midi-Board
0
Compensating clock drift "by hand" - what have I solved?