The electricity grid: what keeps small power generators from being 'driven' by large ones?

This is a two part question and pertains to power generation:

Edit: the second part seems to be already answered here. I'd appreciate a clear and convincing answer for the first part still.

Basically, feedback is used to keep the generator and grid in sync.

There are many ways to do this. A nice overview is here.

Virtually all modern power generation systems use some form of digital controller for the task. My grid-tied solar panel inverter has a PIC18F class microcontroller managing some solid-state relays (SSR) if I remember correctly.

Here is my summary of what I believe to be the most common basic approach to modern power generation plant design. Figure and text adapted from: 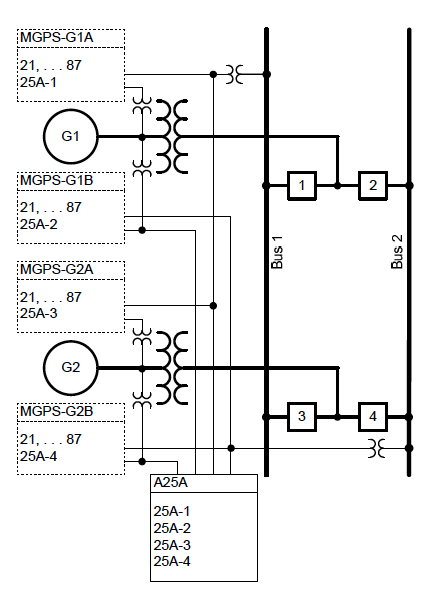 Synchrophasor technology allows voltage readings from various devices throughout the power station to be compared for angular difference. The data can be streamed at rates up to 60 messages per second with low latency.

Since phasor measurement unit (PMU) functionality in protective relays was first introduced in 2000, they have become nearly ubiquitous, and synchrophasor data are available nearly everywhere at no additional expense to the power plant owner.

Just as the microprocessor-based automatic synchronizer can select the appropriate voltages for each synchronizing scenario from those wired to its six input terminals, the PDC can select the proper signals in its incoming data streams for the incoming and running voltages based upon operator selection of the generator and breaker to be synchronized.

No physical signal switching is required. And the synchrophasor voltage measurements from the breaker control relays are independent from the measurements of the automatic synchronizer, which makes the systems redundant.

@Kaz had provided a nice summary of directly slaved motors/generators in the comments (documented here for posterity ;-) ):

This is like asking, what keeps the slave rowers in a boat from just passively letting their oars drift with the water and not do any work? Well, there is a guy who beats a drum and so everyone has to pull at the same frequency, or get whipped. If the slaves get lazy, the boat will slow down, and soon, they will not be able to maintain that rowing frequency without exerting force on the water to speed up the boat again, or else letting their strokes be so obviously small (to match the slow speed relative to the water) that they all get a whipping from the guard.

So, suppose two generators are supplying a grid. One of the generators is slightly lazy and so it just spins along with the frequency: it avoids being driven, but does not put in any work. Then, demand on the grid rises. The other generator gets bogged down and slows down. The lazy one, lazy as it is, is still committed to maintaining the frequency. Since the grid frequency has slowed down slightly, that means the lazy one is now engaged: it is pushing the pace to help speed up the grid, thereby becoming engaged. It's much like when people combine forces to row a boat, or pull a load

In modern power plants, continuing our prior discussion, the approach is simple architecturally: each generator is slaved to a global time reference.

As explained above, the generators are phase locked to a global clock. They are each individually held responsible for their output being at a certain phase angle at a certain time.

If they are too fast, a device called a governor which is attached to the generator applies a braking force. If too slow, an attached exciter adds energy to speed up the generator.

As a side note, you can implement both functions in the same device in some architectures. For example, with a mechanical rotating mechanism, you can attach an electric motor to the axle and resist (govern) or assist (excite) the rotation by driving the attached motor in reverse or forward respectively.

Given that all generators are running in phase with the same time reference, sync is achieved.

I can understand the sync, can you explain how 'it ensures that the generator is pushing current out rather than taking current in'?

This part is intuitive. Look at Ohm's Law or Kerckhoff's Laws...

If you connect a "large" generator and a "small" generator you are only describing a difference in maximum current at the same voltage generated.

As the smaller generator gets overloaded, it's voltage will fall. In rotating generators this results in a reduction in frequency (the rotor slows down) as the electrical loading applies a mechanical braking force through the electromagnet.

In either case, the synchronizers detect the overload condition as a loss of sync and disconnect the generator. This is called "load-shedding." As you can see, load-shedding only makes the problem worse for the remaining generators and the problem can cascade.

This is what happened during the NorthEast Blackout of 2003, although the event was caused by, among many things, a software glitch being too agressive with load shedding rather than actual overload.

There are no diodes, not in the normal AC system. I'm not sure you could build them that big.

As to the large plant versus small plant, the normal operation of the system keeps them in phase; if your generator is leading slightly, it will encounter more resistance and back EMF, which will tend to slow it down. If you're lagging slightly, there is less resistance and it's free to speed up.

When starting up a plant, it's very important to get it in phase (see the link by Dr FriedParts) before connecting it. Failure to do this will destroy something big and expensive.

Not the answer you're looking for? Browse other questions tagged power high-voltage generator mains or ask your own question.

7
What keeps mains power at 60hz?
6
How does a wind farm prevent the fastest spinning turbine from driving the slowest one?
1
How do power companies regulate power plant's voltage output?

26
Can I pedal power a laptop device while the device is being used?
18
What happens to excess energy fed into the power grid?
3
Could a significant amount of electricity be generated from public hand-operated generators?
1
how to compute the average power from AC generator
2
What happens to unused power in generators
0
Producing electricity from heat on a small scale?
0
How to measure the total current driven in a building by observing the electricity meter?
3
On what condition does Harmonic components of power generated in 50/60 Hz Grid Generators depend on?
0
What stabilizes the alternators/generators?