MOSFET symbol - what is the correct symbol

I've been on this site now a couple of months and I notice various symbols used for MOSFETs. What is the preferred symbol for an N Channel MOSFET and why?

It is likely that you saw a Circuit Lab sysmbol and that this caused you to ask this question. The Circuit Lab N Channel MOSFET symbol is both unusual and illogical.
I'd avoid using them if at all possible.
Read on ...

Gate symbol on one side.

3 "contacts" on other side vertically.
Top of these is drain. Bottom of these 3 is source.
Middle has an arrow pointing INTO the FET and the outside end is connected to source.
This indicates that there is a connected body diode and that it is non conducting when the source is more negative than the drain (arrow is same as would be for a discrete diode).

SO. Any of these are OK, and you can see the differences for the unmarked P Channels.

Jippie's example shows the rogue version.
[Note: See below - this is in fact intended to be a P Channel sysmbol].
Truly horrible. I'd have to wonder if this was a P Channel symbol or an N Channel one.
Even the discussion it is taken from has people expressing uncertainty re arrow direction. As shown IF that is an N Channel then it is implying body diode polarity and NOT current flow in source. 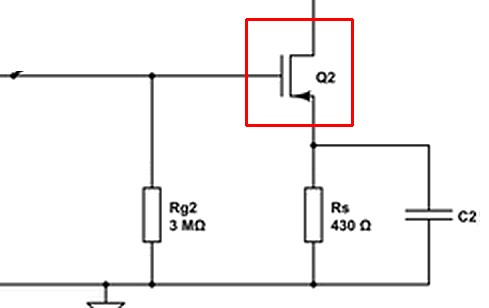 Circuit Lab is apparently the (or a) culprit.
This is their symbol for an N Channel MOSFET.
A nasty piece of work, alas. Arrow shows usual drain-source conduction direction BUT as a MOSFET is a 2 quadrant device and will provide a true resistive on channel with \$V_{gs}\$ positive BUT \$V_{ds}\$ negative, the arrow is meaningless and, as it is in the opposite direction to most N Channel MOSFET sysmbols it is misleading to most. (Note the proper use of this symbol in table below). 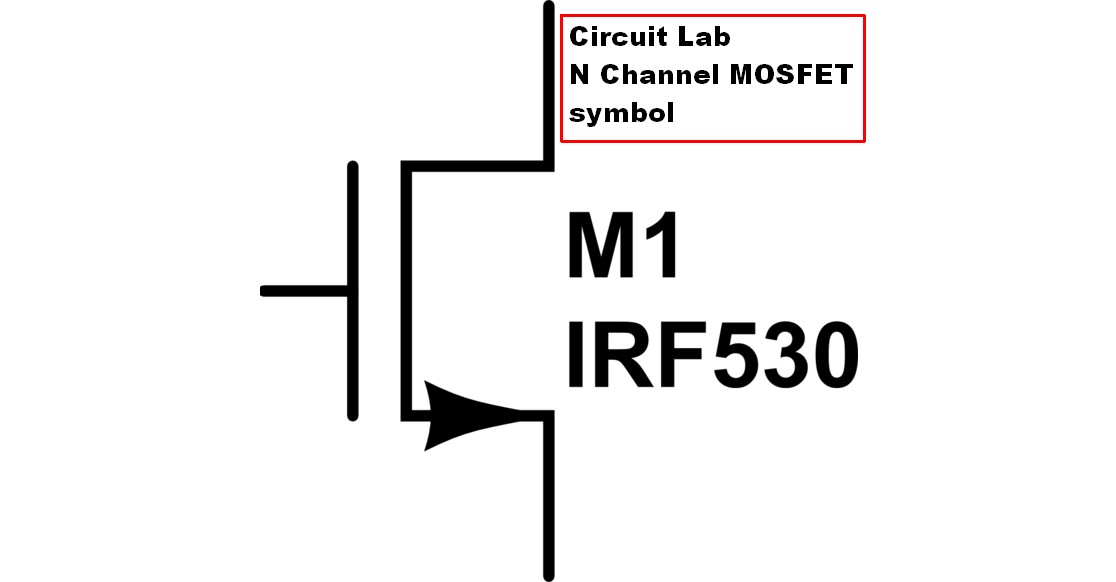 As stated, there really is no accepted standard. This is partly because there are so many different kinds of FETs and partly because people mix them up with BJTs (such as the arrow direction.)

If you are using a specific part and the datasheet from the manufacturer shows a specific circuit symbol, then use that symbol! Many people will argue that it doesn't really matter, but that is nonsense. If a circuit designer picks a particular type of component, then that component should be represented appropriately in the schematics. Each type works differently. Saying that the circuit symbol doesn't matter is essentially saying that the type of part doesn't matter either.

I have had to create my own Eagle library with various parts to represent different kinds of FETs: 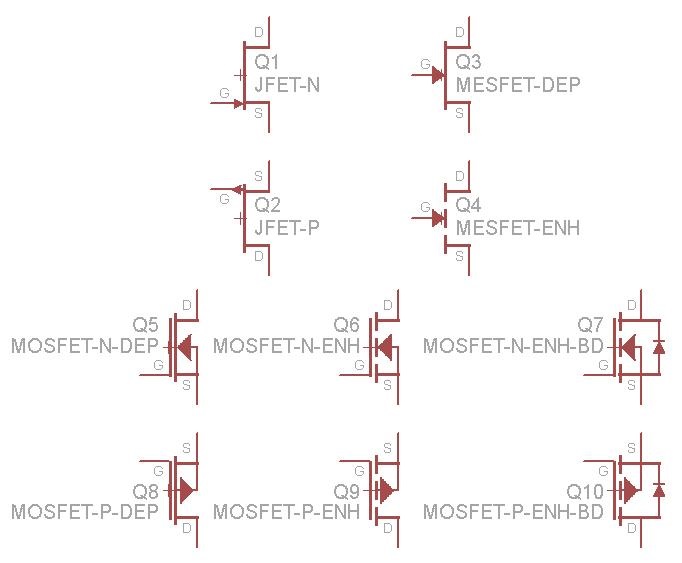 However, there are still many other types of MOSFETs that could be represented differently, such as those with dual gates or showing the body (substrate) connection when it is not shorted to the source. Drawing the circle around the FET is also common, but I have chose not to do it here because it clutters up the schematic and makes the component values difficult to read. Occasionally, you will see the arrow pointing in the opposite direction at the source - this typically means enhancement mode with no bulk.

Yes, Virginia, there is an accepted, published international standard for these symbols. It is IEEE Standard 315/ANSI Y32.2/CSA Z99 and it is mandatory for the US DoD. The standard is intended to be compatible with approved recommendations of the International Electrotechnical Commission. The standard is very detailed and lengthy so I'll show just a few examples.

This is an enhancement-mode, four-terminal, NMOS transistor. Note that the gate terminal shall be drawn as an L-shape with the corner in the L adjacent to the preferred-source terminal. The arrowhead pointing inward at the bulk/body terminal indicates that the body is P-type (and so the source and drain are N-type). The vertical line segments for the drain, bulk, and source connections are disconnected to show that the transistor is an enhancement-mode device.

Here is the same symbol, except for a depletion-mode transistor. Note that the vertical segments for the drain, bulk, and source are continuous.

The standard allows for an internal connection between the source and bulk, as shown in this depletion-mode NMOS.

Here's the relevant page from CEI EN 60617-5:1997, which is basically the Italian incorporation of the IEC 60617 standard. Other than the fact that they call MOSFETs IGFETs, it's basically using the same symbols as the IEEE standard, but sans circles. 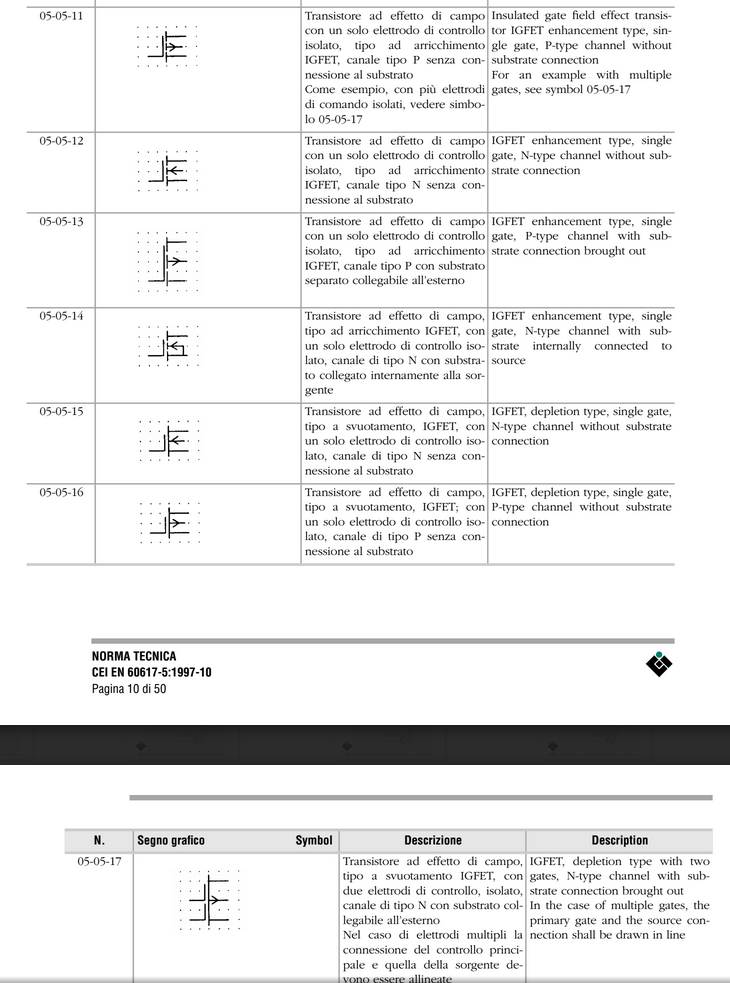 Note that the dot grid is not part of the symbols. It's only used in this standard to indicate how big the symbols are to be drawn relative to other symbols in the standard.

The (common) p-channel MOSFET with substrate internally connected doesn't appear to have a symbol in this version of the standard, i.e. the standard is lacking a p-channel version of symbol 05-05-14. As stefanct points out in a comment below, this list is just a list of examples of how standard's elements are to be combined, so the non-listed variants are composed by analogous rules.

By the way, JEDEC also has a standard for these symbols in their JESD77: 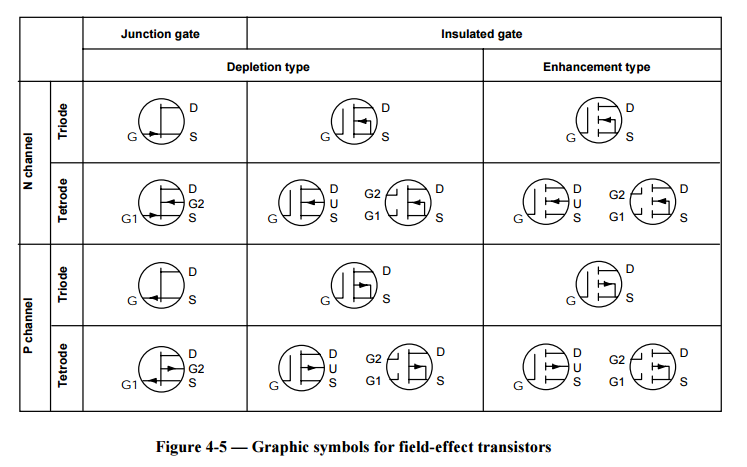 Some MOSFETs, including most that are in "standalone" packages, have the source connected to the drain. Such MOSFETs will have an inherent diode in them between the source and drain, which will conduct if the MOSFET is biased in the direction opposite the direction it would typically switch (e.g. if souce is more positive than drain for an NFET, or more negative than drain for a PFET). The arrow on the symbol indicates the polarity of this diode.

Other MOSFETs, especially those within digital logic chips, have the substrates connected to a power rail, independent of their source, drain, and gate connections. While one could include such connections on a schematic, doing so would be somewhat like adding power-rail connections to every single logic gate on a schematic. Since 99% of logic gates have their VDD tied to a common VDD, and their VSS wired to a common VSS, such connections would be visual noise. Likewise when 99% of NFETs have their substrate tied to the most negative point and 99% of PFETs have their substrate tied to the most positive point. If the substrate connection of a MOSFET is implied rather than shown, one could distinguish between NFETs and PFETs by using an arrow for the unconnected substrate terminal, but that could be somewhat odd.

Further, while it is possible to construct a MOSFET whose source-drain channel is symmetric, using an asymmetric channel will improve performance when the device is used to switch current in one direction, at the expense of its performance in the other direction. Since this is often desirable, it is often helpful to have schematic symbols which distinguish between the source and the drain. Since the source-connected substrate symbol "marks" the source lead, and since BJT symbols mark the emitter whose use most resembles the source, it is common for MOSFET symbols which don't have a marked substrate to use an arrow whose direction is analogous to that of a BJT.

My own preference is to use an NFET symbol with an outward-pointing arrow on the source, possibly with a back-biased source-drain arrow in cases where that would be relevant. For a PFET, I use an inward-pointing source arrow, and also add a circle on the gate. When I am sketching out conceptual VLSI designs for illustrative purposes (I've never been involved in the design of an actual fabricated chip) the NFET symbol and FET symbol for transistors used as bidirectional pass-gates won't have any arrow, but will use the circle or lack thereof as a polarity indicator.

Incidentally, I find it curious that in cases where discrete MOSFETs are used to produce pass-gates, it's typical to use two back-to-back FETs, each of whose source is tied to the substrate. I can understand that in cases where a circuit would tie a MOSFET's source to its substrate, manufacturing a part with them connected is cheaper and easier than including an insulator; I would think, though, that it should be cheaper to make one MOSFET with an isolated substrate than to make two MOSFETs each with a source-substrate connection. I wonder if individual source-substrate connections would be generally "preferred" within a VLSI design except for the fact that it's easier to connect many transistors with a common substrate than to isolate the substrate connections of transistors which have isolated sources. Perhaps the situation is somewhat analogous to vacuum tubes (some tubes connect the cathode to one of the filament connections, but others use a separate cathode pin)?

1
How to determine which terminal of a MOSFET is source, drain or gate
1
MOSFET Symbol Confusion
346
What is the difference between \$V_{CC}\$, \$V_{DD}\$, \$V_{EE}\$, \$V_{SS}\$
10
Why does CircuitLab have the MOSFET symbols it has?
0
Where can I find the symbolic symbols of various bipolar, JFET, MOSFET in a *unified* style?
0
MOSFET analysis
0
NMOS and PMOS current sources
0
PSpice cascode mosfet design not working properly

4
P-channel MOSFET ZVS Flyback Driver
0
Miniaturization of MOSFET vs. Resistors
0
Pros/Cons of using a Power MOSFET vs. a standard MOSFET
4
MOSFET symbol with no arrow but circle instead?
0
What does a P-Channel MOSFET symbol with body connected to source mean?
0
What MOSFET is used in this waveshare e-paper display?
6
Which one is the correct symbol of enhancement type MOSFET?
0
Create an H bridge with MOSFET instead of relays
0
CN3722 solar controller - What MOSFET should I use?