I am trying to make an audio amplfier using an opamp for a project. It works kind of okay but the only issue is there seems to be a lot of noise in the output of a 0.5 watt speaker. I have tried changing the various capacitor values but there still seems to be noise. Whts the best way to bring down this noise in the circuit? My circuit is identical to the one http://www.elexp.com/t_audio.htm. Could someone please help me out?

The input is from my laptop jack output . Could this cause any ground issues which cause noise?

With the exception of power op-amps, op-amps are not suitable for driving loudspeakers. The impedance of speakers is too low. You need a power amplifier chip for driving speakers, or to add a class B emitter-follower output stage made using two complementary power transistors.

Some op-amps are much more noisy than others. They produce noise and it cannot be eliminated; it is inherent to the op-amp. If you're doing audio work, and the circuitry doesn't have to be very low power, use an audiophile op-amp IC like LM4562 or the cheaper workhorse that is nearly as good: NE5532.

But neither of those will drive an 8 ohm speaker, or even a 32 ohm headphone speaker.

Also, do not expect to get anywhere near the 0V and 9V power rails with the signal swing. It's not realistic. Even if you get an op-amp that can do it, the speaker-driving output stage will not. I wouldn't plan on more than a +/- 2V displacement from the 4.5V middle bias, staying several volts clear of either power rail.

I sketched up the circuit below to illustrate the class B emitter follower output stage idea. The op-amp is basically used as a buffer with a modest voltage gain of 2 to interface the input to the output stage. You don't need a high gain because the available voltage swing is not so high. The output stage will only swing the voltage on the speaker to about +/- 2V before clipping. If the input signal is already +/- 1V, the gain headroom is only 2!

We still have serious problem here in that the output stage's input impedance is still too low for the op-amp! It's not nearly as bad as an 8 ohm speaker, but look at those 470 ohm resistors. Basically, they have to be considered in parallel, and so the input impedance is only about 230 ohms! Their values can be raised, but this cuts into our already limited voltage swing. We can fix that by using pairs of transistors in the output stage, to increase its current gain.

I can think of an op-amp off the top of my head which can handle this impedance as it is: the NJM4556. The op-amps on this chip can drive 150 ohm loads. 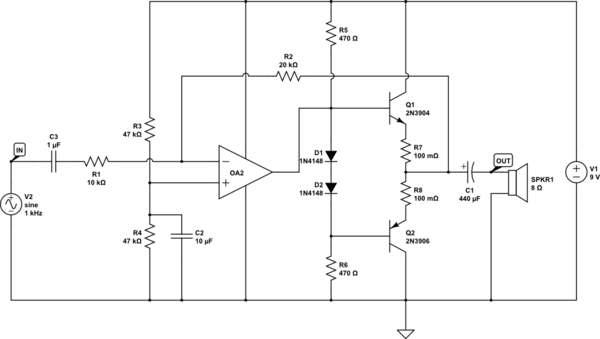 I faced a oversight problem which was causing huge noise — the feedback through the mic lowering gain using the desktop slider of the mic or muting it will stop this. Other is the RF using a RF bypass capacitor at the input of the amp say 330 like in this link http://www.markhennessy.co.uk/showpic.htm?preamp/main_audio.gif.

Use an impedance matching preamp like TL072 to match impedance of computer audio out to amplifier input.

Not the answer you're looking for? Browse other questions tagged audio amplifier or ask your own question.