Circuit that switches one led or all three

For an analog photo enlarger (yep, that vintage stuff) I own, I would like to build my own lightsource. For the prototype I found 3 colored super bright led panels they use 12V 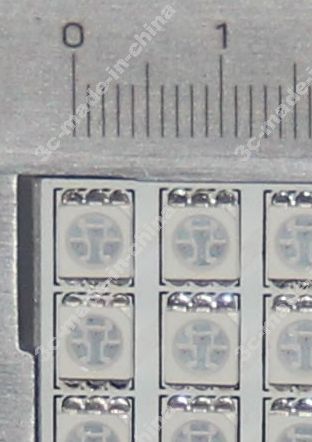 The problem is that I need to turn on the lights in a specific setting: 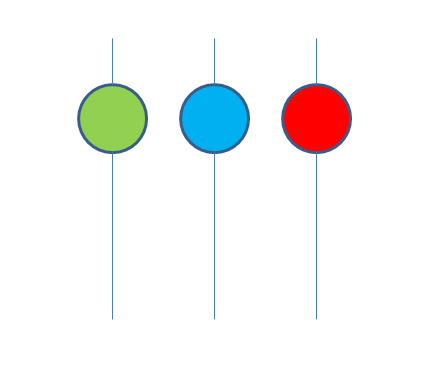 I know how to put the lights on power, how to solder them on a board, but I have no idea what a smart solution should be for such a circuit, what kind of switches I need. The solution must provide ONLY the settings as described. So e.g. a Blue and Green at the same time is not allowed.

some background information: The black and white photo paper is sensitive to blue and green light, but in a different manner. By mixing both color's exposure times I can influence the contrast and the tone of the result. The paper is insensitive to red light, that enables me to project the image on the paper without starting the exposure process. The white light (RGB) is used for focussing purposes.

With the LED panels, you shouldn't need any sort of current limiting resistor or special current driver source - just connect to 12V and go. I can't say they are the highest quality, but they should work fine for what you are trying to do, although, I think the using RGB LEDs would work better as the different colors would blend better to form white than these separated panels will.

I think this could be solved very easily using many different methods. The best method for you will depend upon what you know how to do. A simple microcontroller with a couple of external buttons and transistor switches would work flawlessly, but if you don't know how to program, that is not a good route. A few logic gates driving transistors with button inputs would also work fine, but I imagine you would have already done that if you knew how.

If you would be interested in seeing a simple logic circuit, let me know and one can easily be provided.

But what about using a couple of different simple switches. Take a look at this circuit: 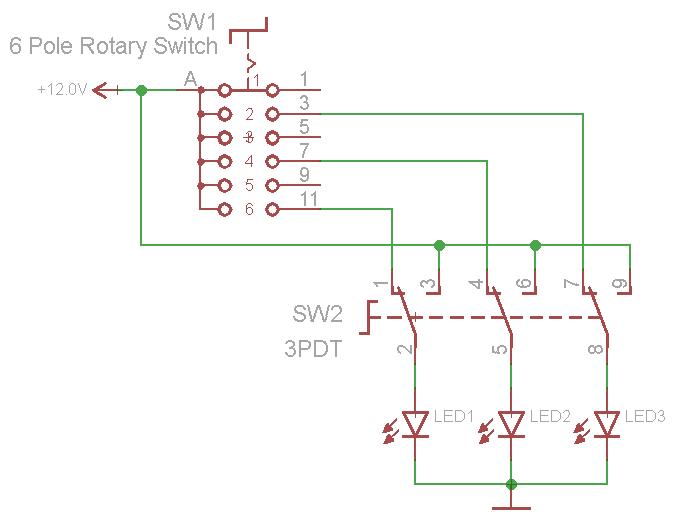 Switch 1 is 6 pole rotary switch. It uses rotating knob to connect the main input to one of the 6 outputs. There are many types of rotary switches with many poles (number of contacts). You will need at least a 4 pole switch, but a 6 pole switch may be better. I'll explain why in a minute.

Switch 2 is a triple-pole, double-throw switch. It has three different poles, and has two ways to "throw" them. If the switch is throw in one direction, all three LED box positive leads are connected to 12V, so they all three turn on. If it is thrown in the other direction, each LED positive lead is connected to one of the poles on the rotary switch.

If using a 4 pole rotary switch, pole 4 should be left open - this would be all LEDs off. Pole 1 would go to LED 1, pole 2 goes to LED 2, and pole 3 goes to LED 3. As you turn the knob, a different LED will be powered. There are two reasons why a 6 pole switch may be better. First, there could be an off state between each of three LED off states (1 ON, all OFF, 2 On, all OFF, 3 On, all OFF). Secondly, some rotary switches are not completely off in between states, meaning that as you turn the knob, the two adjacent LEDs will both be on for a moment, and I don't think you are wanting that to happen.

The great thing about using the 6 pole rotary switch in combination with the 3PDT switch like this is that no two LEDs can be on at the same time - it's either none, one, or all of them. The down side to using the rotary switch is that you can just select an LED bank to turn on, you might have to cycle through the colors depending on the current state of the switch.

One way to avoid this is to use a third "main power" switch to disconnect power/ground to the whole thing while you select a specific color with the rotary dial. Since you are working with color sensitive paper, this might be the best way to go.

A different way to do it is to replace the rotary switch with three common single-pole, single-throw switches like this: 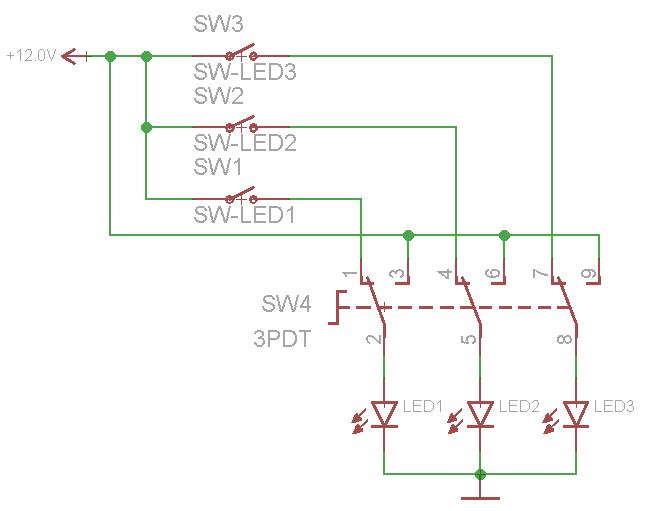 With this setup, you can easily choose which LED bank to turn on. The bad thing is that you could accidentally turn on more than one at a time if you aren't careful...

Of course, no matter what you do, the switches need to be at least rated for 12V DC and as much current as the LEDs are expected to draw.

There are other mechanical switches that will select one while automatically deselecting other inputs - like how a lot of old RCA selectors used a spring loaded lever to select between your VCR, Nintendo, DVD player, etc to input into the TV RCA jacks. But again, these switch selectors typically allow more than one input to be select as they change states.

6
What type of method for producing White-Light LEDs is the most common?
4
LDR + RGB Led = Color sensor. How to calibrate it?
4
Why are there no high efficiency green/cyan phosphor LEDs
3
LED's for a project won't work in parallel
1
Wiring 3 led lights to a timer switch
0
How to find the best way to fade in/out?
0
LED light bulb in series or parallel?
0
Common anode RGB LED lights going out one color at a time
1
Building an LED large format enlarger light source
12
White LED doesn't light up when a red LED is parallel to it