Can two electrolytic capacitors be made into a bipolar? [duplicate]

I know if you put an electrolytic capacitor backwards they explode and it's quite fun to observe them exploding. I am wondering if you can use two of them (and some diodes) to turn it into a bipolar capacitor so it may be used with AC signals?

Connect in the following manner

Short both the -ve terminals. The other two +ve terminals can be used as leads of a non-polar capacitor.

I know that if you do like this the capcitance will reduce. I thinks it by 1/2.

Using two electrolytic capacitors of identical value back to back is routinely used to get a non-polarized capacitor.

If two, same-value, aluminum electrolytic capacitors are connected in series, back-to-back with the positive terminals or the negative terminals connected, the resulting single capacitor is a non-polar capacitor with half the capacitance to either of the original pair. The two capacitors rectify the applied voltage and act as if they had been bypassed by diodes. When voltage is applied, the correct-polarity capacitor gets the full voltage.

You do not even need additional diodes. The equivalent model for an electrolytic capacitor is given below. Note the implicit diode in there. 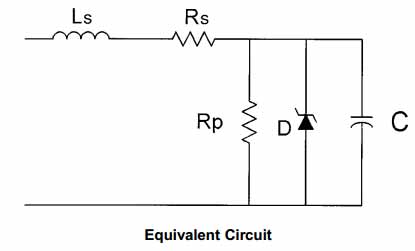 When two such capacitors are connected back to back, the diodes will be in opposition to each other, blocking DC in both polarities.

On a contrary note, see also this answer to another related question on this site, where @Kortuk has a contrary opinion in the comments, against using normal electrolytic capacitors back to back.

While that viewpoint has been put forward in discussion, I have been unable to find any academic study substantiating the concern. That is not to say that such a study or reference does not exist.

I do find several references to applying normal back to back capacitors for non-polarized functioning, and have used this myself for many years in various designs, with never a single failure. The only caveat I adhere to, is to not approach within shouting distance of the rated voltage for each of the capacitors, if using them this way.

Not the answer you're looking for? Browse other questions tagged electrolytic-capacitor or ask your own question.