Ceramic vs. Film Capacitor: Which one is preferred in audio circuits?

However, as I was reading the circuit schematic, I noticed that the author denotes that the capacitors C101, C104, and C105 are supposed to be "film capacitors." Is there a reason as to why one would use film instead of ceramic capacitors in this application? Also, if a website denotes "metal film capacitors", is that the same as a "film capacitor"?

Right now, the only difference I know of in types of capacitors is that electrolytic capacitors have a polarity, while ceramic ones don't. I was wondering if film vs. ceramic has a similar differentiation.

"Film Capacitor" typically denotes polyester or polymer film as the dielectric - as another answer points out, metallized film capacitors are the same thing: A metallic coating being applied to an extremely thin polymer film, to create the conducting electrodes of the capacitor.

In general, ceramic capacitors are somewhat non-linear in their frequency and voltage responses, compared to film capacitors. Another issue with ceramic capacitors is that they tend to behave as microphones, thus picking up ambient sound and modulating the voltage across them accordingly.

Also, for smaller values (a few pF), ceramics were more commonly used, while larger values were somewhat likely to have film considered as an option - or at least that was how it used to be, before capacitors became so inexpensive with the advent of SMT, that the price difference became negligible except for huge volumes.

Both film caps and ceramic ones are non-polarized, so that isn't a difference.

Depending on the exact type, ceramic capacitors tend to have some nonlinearities. What makes them less than ideal in the audio signal path is, most of all, the varying capacitance with a change in voltage. Here's a diagram for various types of ceramics (and it doesn't even show ceramic dielectrics like Y5V): 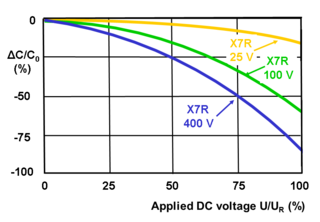 With your audio signal changing, your capacitors change, too. This causes non-harmonic distortion.

Think of a high-pitch note superimposed on a bass note. While your bass note is close to zero, your higher note passes through a capacitor with the nominal value. When the momentary voltage of your bass note is higher, a (bad) ceramic capacitor has a lower value, i.e. your high pass filter has a higher cutoff frequency. This may lead to the higher note becoming damped more strongly.

For audio applications, you will often need large capacitor values. Only non-linear types of ceramics tend to have these.

Film capacitors are quite linear and usually better suited for analog signal processing.

There is another reason for avoiding ceramic capacitors:

Some ceramic caps (particularly MLCC SMT parts) can actually generate voltage across their terminals when subjected to physical stress.

Ceramic caps are also often microphonic, which predictably can cause issues in analog applications.

16
What are Y5V or Z5U capacitors good for?
7
Capacitor selection for filtering of low level signal
5
Quantifying the piezoelectric effect of ceramic capacitors
2
Will an electrolytic capacitor work reliably with 0 VDC and 100 mVAC?