Will LEDs in opposing directions be damaged?

I was trying to build a simple RC circuit that causes an LED to fade in and out. However, I have electrolytic capacitors, which means that they have polarity.

If I connect a circuit as follows , is the circuit capable of damaging an LED due to back voltage? (The capacitor is supposed to have polarity, but I didn't know how to put the symbol in CircuitLab.)

I think not, because the other LED has very little resistance when the voltage is at any substantial level. 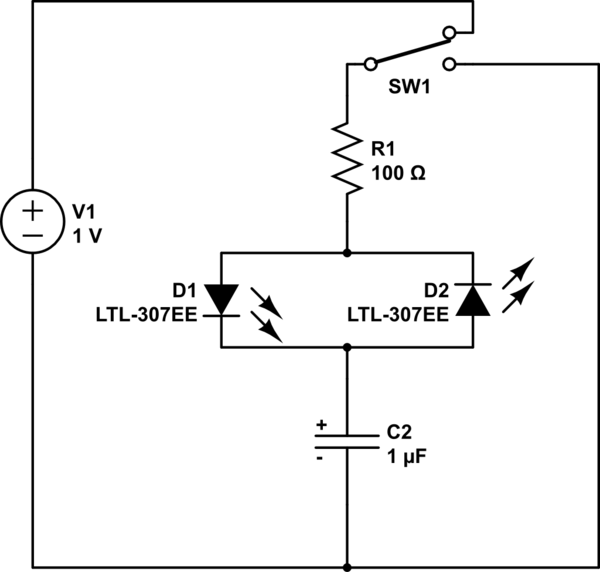 When making the circuit in CircuitLab, I left the component values (e.g. 100 ohms or 1V) as default, as I'm mainly interested in the generic circuit, not a specific one.

Note that each diode shunts the other's reverse voltage. Neither diode is permitted to have more reverse drop across it than that which is established by the forward drop of the other. This kind of circuit basically shows a symmetric voltage drop in either polarity.

Back-to-back diodes are used (for instance in op-amp feedback) to create symmetric clipping (before the signal swings to the power rails). The clipping can be softened with resistors.

The resistor protects the diode stack by dropping most of the voltage, and this works in either direction.

To notate a polar capacitor in CircuitLab, right click on the part, click Edit Parameters, and then use the combo box next to the DISP: field to choose polar.

Not the answer you're looking for? Browse other questions tagged led capacitor resistors electrolytic-capacitor or ask your own question.