Can we measure reflected power in a transmission line?

In his book "Reflections", at the start of Chapter 8, M. Walter Maxwell says "Energy reflected by a mismatched line termination can be entirely separated from the forward-travelling wave, and then be dissipated in a temperature calibrated resistor, and accurately measured as I^2R heat."

He later says "I have performed these measurements many times"

Now I find this book long-winded and too assertive, so I haven't read it all. Is he right? How can we do this measurement? What does it really measure?

I believe that forward and reflected power are mathematical artifacts used to make the calculations possible, and do not exist as separate physical entities. Am I right?

Energy reflected by a mismatched line termination can be entirely separated from the forward-travelling wave, and then be dissipated in a temperature calibrated resistor, and accurately measured as I^2R heat.

This is more or less correct, with a couple of caveats.

Second, the measurement is not typically done by heating a resistive element. This can be done and it is called a bolometric power sensor. However it's more common in my experience to use an rf detector based on a diode. The nonlinear response of the diode converts some of the rf energy to a dc voltage, which is read with a voltmeter.

Bolometric sensors might be used for very high power conditions, or when calibration to a non-electrical standard is required (e.g. a thermometer).

Edit Replying to your comment, "the generator supplies only the actual power that is transmitted to the load."

This depends a lot on the details of the generator. You refer to a white paper that suggests the following scenario:

Suppose a lossless line is terminated by a pure open circuit, and suppose the the line is exactly one wavelength long at the operating frequency. In this case the current at the generator will be zero, and so the current in its internal impedance will be zero, so there is no power dissipated in it.

This is correct if the generator is actually a perfect voltage source with a 50-ohm series resistance. But an actual benchtop generator might contain other circuits like a levelling circuit or power monitor between the actual generator and the front panel port. Also you rarely know the actual line length to the load --- maybe there is some internal transmission line between the actual source and its front-panel port. If you don't know you have perfectly tuned the transmission line length, then the reflected power is the power you should be prepared to absorb at the generator, even if you don't have to absorb that much in every case.

Also, the case of an open circuit termination and half-wavelength line means that the generator sees an effective open-circuit load (that's why the current is 0). But not every type of generator is designed to work correctly with an open circuit load. A practical circuit could end up demanding more power from other elements within it, or generating more harmonic content when incorrectly terminated. This could still damage the generator even if the ideal components view of the circuit says there's no power transferred in the standing wave.

Finally, if you did insert a directional coupler into this scenario, you would transfer power through the coupled port and into whatever terminates that port (assuming it's not a perfect open or short). This means you would have "separated the forward and reverse waves" as suggested by the author you quoted, even though you did it in a system that was not transferring power before you inserted the directional coupler.

Yes you can. SWR meters can be made and the traditional way amateur radio operators do this is by inserting two lengths of enamelled copper wire between the braid and conductor insulation of a length of coaxial cable. These wires are terminated at one end and a peak detector is fitted at the opposite end. 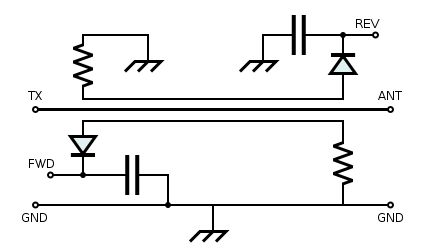 Commercial units are more likely to use a carefully manufactured PCB.

There is nothing wrong with the method described in the book, although it would only work well for relatively high powers.

There are a number of RF devices (directional couplers, isolators, etc) which discriminate the waves based on the direction of propagation. Of course nothing is perfect, but it is quite common to see 20-30 dB of isolation.

MikeJ-UK is quite right - it works and works with a continuous sinewave signal. If you are intent on understanding the theory there is a decent article called "Analysis of a portable Wattmeter by Frederick Glenn, K9SO". Here is a link to his website. It does cover all the necessary information for understanding SWR meter theory.

First I would like to thank all who contributed to the question, in particular The Photon, who led me to articles that gave a resolution of the problem.

Here is my take on the idea of forward and reflected waves on a feeder from an r.f. generator to a load.

I will use "c" for the speed of electromagnetic waves along the feeder.

I think the clue to reconciling the apparently different views on this is to consider what happens when a sine wave is initially applied by the transmitter to the feeder. The front travels down the line at c, with voltage and current in phase. What happens next depends on the termination of the line. If it is the characteristic (resistive) impedance Z0 of the line then there is no phase change, and the energy conveyed by the line is dissipated as heat, or radiated from the antenna (or a bit of both?) and this situation continues indefinitely.

If the line is not terminated in Z0 then there is a phase change due to this mismatch, and the effect of this travels back at c as the front of a reverse, reflected wave. Until this front reaches the transmitter, energy is still being sent into the feeder as a sine wave with voltage and current in phase.

When this returning front reaches the transmitter, the line impedance is no longer seen as Z0 because of this phase change. So there is a further reflection forward down the feeder, which is reflected back again at the load, and so on. This eventually results in a steady state, with a reduced forward flow of energy towards the load, and (in principle) an infinite number of counter-travelling waves. The only observable effect of this summation of forward and reflected waves is to change the input impedance of the line. The process is analysed and explained in: http://www.qsl.net/zl1an/Downloads/Bruene_explanation_V13.pdf. Overall this is an excellent, fairly mathematical, article that dispels a lot of the myths and misconceptions common for this subject.

To quote from this article, for a normal, inevitably lossy, line "This derivation shows that the “standard” forward and reflected waves take a finite, though small, time to form, since energy has to travel up and down the line to create the wave assemblages that are summed. However, this process can be pretty well considered “instantaneous” at h.f., since typically a maximum of 10 or so line-lengths are travelled before contributions become vanishingly small - about half a microsecond on a typical 10 metre length of coax having a velocity factor of 66%."

In the resulting steady state, no further energy flows in the reverse direction, from load to transmitter. If we do think of there being a reflected wave then we can say that the energy it carries is subtracted from the forward energy that would have flowed, if the line was terminated in Z0, to give the net flow, which is always from transmitter to load. The transmitter never sends out more than the difference between the notional forward and reflected powers.

The steady state has a standing wave established on the feeder, governed by the situation at the load end. What the transmitter sees is determined by the length of the feeder, and depends on the phase relation at that point. At a voltage node the voltage is high and the current is low, and the transmitter sees the line as a high impedance. At a voltage anti-node it is the opposite, low voltage and high current, so the line is seen as a low impedance. We note that the standing wave is of average, usually r.m.s., values.

The standing wave can be resolved mathematically into forward and reflected components, also in the form of waves. In the forward component the voltage and current are in phase, and in the reverse component they are 180 degrees out of phase.

The current in the r.f. wave travelling forward can be analysed using phasors, into two components, that part (forward) in phase with the voltage, and that part (reflected) 180° out of phase. By sampling these currents they can be measured as voltages, and a calculation made of energy flow, i.e. forward and reflected powers, which can be displayed on moving coil meters with suitable calibrated scales. In order to use d.c. meters to measure the r.f. voltages, rectifying diodes are commonly found in SWR meters, nothing to do with separating the forward and reflected components. There area number of caveats to the power calculation, but for all practical purposes it is near enough.

To go further, for a less mathematical approach, I refer you to this article by Bruene, which nicely explains it all using graphical phasors: http://kambing.ui.ac.id/onnopurbo/orari-diklat/teknik/arrl/using-equipment/5904024.pdf

Note: My references worked on 23rd May 2013. I have found that some other references to these articles are no longer valid.

3
Are waves reflected off a transmission line when they reach the generator dissipate there?