Need help with a sub-standard RS232

This isn't a problem when you use the interface on standard RS232 ports but in my case it simply doesn't work and investigating on the PCB of my device of interest, that exposes a DB9 connector, I've found it isn't a real standard RS232 port but the RX and TX pins are connected, through 2 transistors, to a microprocessor UART interface.

This kind of port works well with the PC RS232 that uses a +/-12v voltage levels so I suspect the max232 output is simply too low for it.

Edit: What about "combine" two identical RS232 signal (max232 has two converter but I'm actually using only one of them) forming a new signal equal to twice voltage level? Is it possible?

Edit2 - 2013/05/22: The signal voltage levels don't seem to be the problem just because that device works using a USB-RS232 adapter and in this case the signal levels are about +/-6.5v (at least on my converter).

I drew the interface circuit from the device pcb to better understand what's happening :) 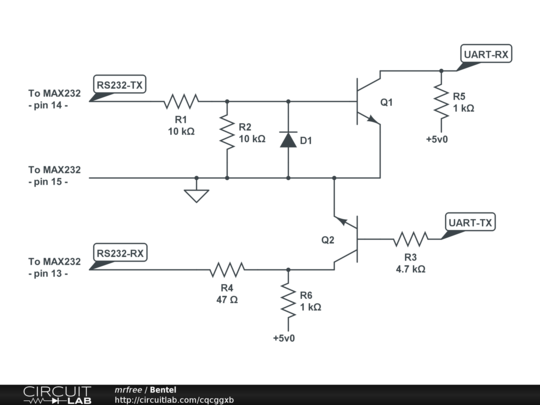 Notice: I don't know if that diode is a zener or not

Then I made some new tests using my breadboard sniffing data directly from the cable.

So at this point I need to know in which max232 output line and my PC serial port output line are different. What should I try in your opinion?? 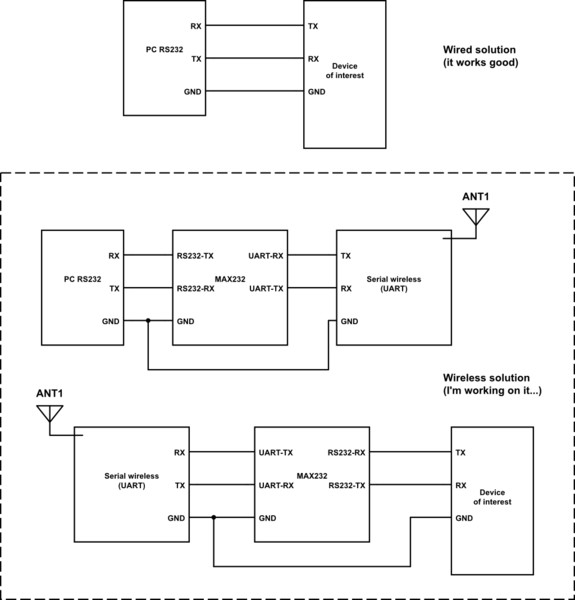 The problem was an undocumented even parity bit required by the device I need to control (a Bentel Kyo300 alarm security panel), but even if I found which the problem was a limitation in the serial wireless modules prevents to re-generate the parity bit on the destination end-point.

I've learned a lot about hardware-level serial communication during this discussion so I'm happy even if I spent few more euros ;)

Not the answer you're looking for? Browse other questions tagged uart rs232 ttl converter or ask your own question.

5
RS-232 Buffer circuit
5
Do I need MAX232 when using USB-to-Serial cable?
7
Problems with homemade RS232-to-TTL converter board based on TI's MAX232
1
How can I know whether a random “known not TTL” RS232 device will work with any old random USB-RS232 converter?
0
TTL-level camera with MAX3232 installed - is that really TTL-level or an RS232-level?
5
Sparkfun RS232 Shifter SMD TTL Waveform DC Offset
1
Are RS232 to RS422 converters reversible?
1
TTL to RS232 logic translation
0
How to find out whether serial standard is RS232 or TTL when stated as “serial(RS232/TTL)”
0
RS485 vs RS232 similarity vs differences