PIR sensor triggered by itself when using timer, works without timer

I have a PIR sensor connected to an ATMega328p. The PIR sensor has three pins; VCC, GND and AL. The AL pin uses open collector to show that motion is detected.

What I have done is that I connected the AL pin to PC0 pin on my ATMega and set up the pin as input with internal pull up resistor and a LED connected to PC5 to show when motion is detected:

Then I have a function that checks when the PC0 pin is LOW:

Everything works as expected, the LED lights up when I wave my hand infront of the sensor and it does not trigger without motion. The sensor sets the AL pin LOW for about 100 - 200 ms.

The thing is that I don't want to use the signal for 2 seconds after motion has been detected. So I implemented a timer and flag logic that ignores the signal during these 2 seconds. The problem is that now the LED lights up by itself after the timer has stop counting and start accepting motion signals

Then I new logic to the check_sensor function:

When motion is detected the first time, this is what happens:

Then there is a new function which handles the countdown:

This function should be ignored unless there is a motion detected. When countdown has been completed timer indicating LED is turned off and motion flag is reset which indicates that a new signal can be accepted.

Things I have tried

I have tried adding software debounce functionality where motion is only accepted if PC0 is LOW for a defined amount of cycles. This did not change the faulty behavior.

Push button instead of PIR

I have tried removing the PIR and add a push button which is LOW on push down. When using the push button the circuit and logic works as expected.

Here is the schematics for the power supply. The circuit is connected to a Stabilized DC power supply where the +5V rail is actually around +6.5V (I don't know how to edit the text of a component in gschem). VCC is what I connect to my microcontroller and PIR-sensor, as you will see in the second schematic. 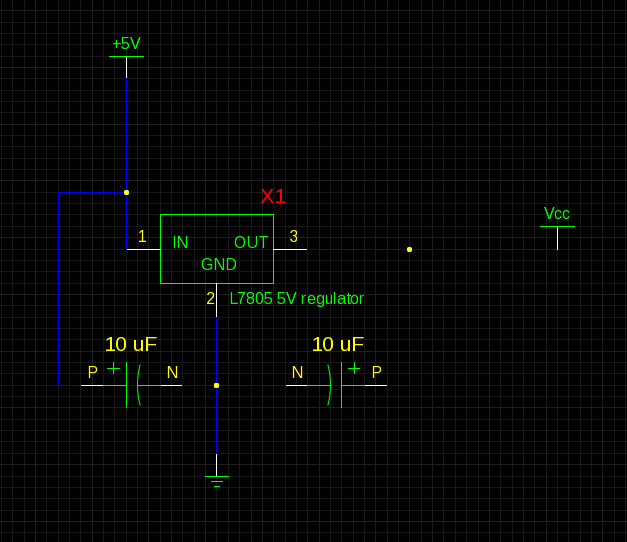 Here is the schematics for the microcontroller, the LEDs and the PIR-sensor. Some pins are not shown in the schematics: RESET pin is connected to my programmer, same with MOSI, MISO and SCK. 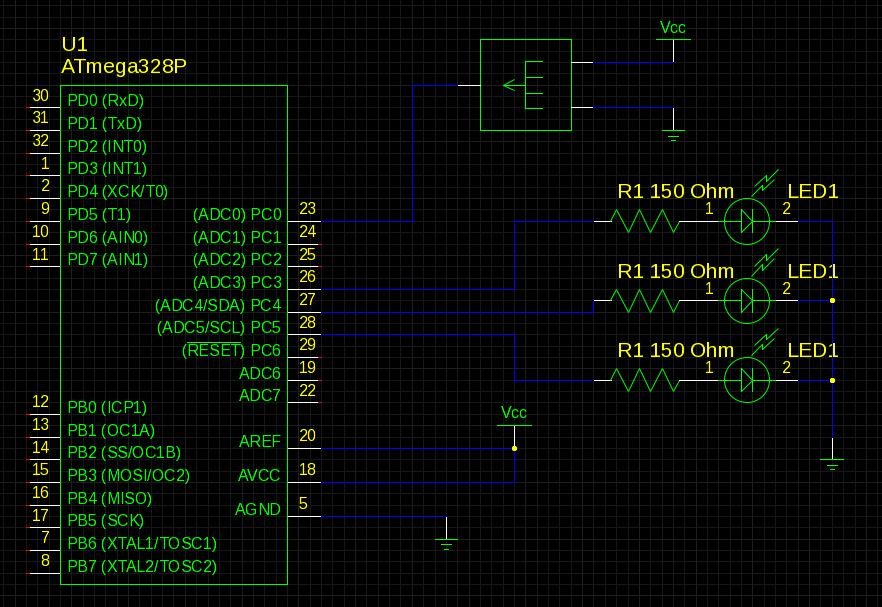 The typical dropout voltage of the 7805 is 2.0V but you only have 6.5V input so the regulator can't work properly. This could mean that any small current spikes in demand on the load side of the regulator eg when switching on LEDs would result in voltage ripples, despite the 10uF capacitor, and PIRs are very sensitive to voltage ripples.

I'd recommend raising the input to the 7805 to at least 7.0V and probably 8.0V to allow for variations in drop out voltage (2.0V is listed as typical, not maximum), and adding an RC filter to the supply to the PIR circuit. However, you'd need to size the R carefully to avoid reducing the PIR circuit supply to less than it's specified minimum (maybe an inductor would be more effective and less loss). Another option would be to use two 7805s, one for the micro and one for the PIR circuit, with common 0V, which would prevent noise from the micro side getting into the PIR circuit so much.

Not the answer you're looking for? Browse other questions tagged microcontroller avr atmega infrared proximity-sensor or ask your own question.

2
atmega1281 + Nokia 5110 LCD circuit works with USBtinyISP plugged in. Hangs without?
6
Reducing the sensitivity of a PIR sensor?
1
pir motion sensor sensor - working principle
0
How do I drive pin 2 on my 555 IC low so the one-shot timer will fire, using an IR sensor in place of my pushbutton switch?
1
Problems reading a signal with a MCU (TM4C123GXL) input pin
0
PIR motion sensor connected to Arduino sometimes does not detect a repeatable trigger
2
Configuring Atmega32 timer using the oscillator without prescaling gives wrong delay time
0
How to connect multiple digital sensors with single wire?