Using a N-Mosfet to switch a common cathode ledstrip

I am trying to drive a RGB-ledstrip using the following circuit: http://learn.adafruit.com/rgb-led-strips/usage

As I am using a Common Cathode led-strip instead of a Common Anode one as used in the above link thus I came up with this 'modified circuit'. Because my experience with FETs was nihil this didn't actually work as I would need at least a voltage => Vcc to saturate the MOSFET.

Is it possible to use a N-channel MOSFET at all for this application? and if so, what do I need to do to make this work (Control the LED-strip brightness with a PWM signal, logic 5v).

mosfet led-strip
Share
Improve this question
edited May 24 '13 at 5:51

If all you need is to turn all the LEDs on/off using PWM, you can attach the N-chan MOSFET between the common cathode and ground. Here's an example circuit, ignoring LED current limiting schemes for now. 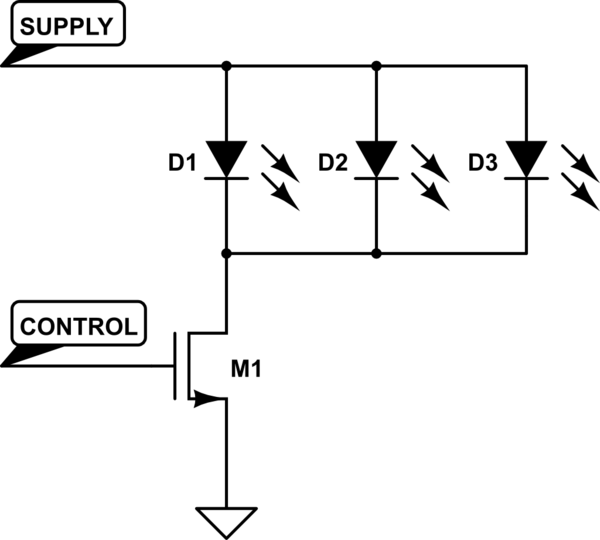 If your micro is not able to achieve either of these levels, you can use a second transistor to drive the transistor in series with the LED(s).

Here's a basic example which uses a P-chan MOSFET to drive the LED's, and a N-chan MOSFET/pullup resistor to control the P-chan MOSFET: (again, ignoring any LED current limiting schemes) 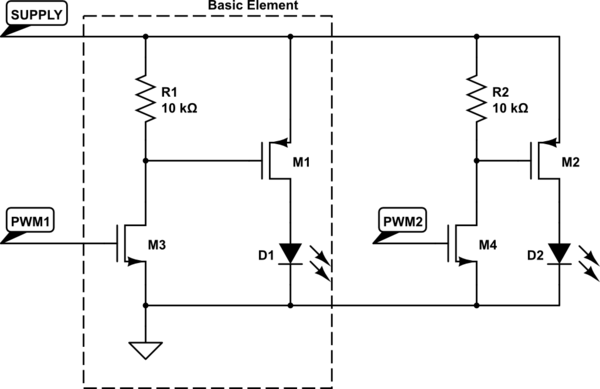 Common solution is to add boost circuit, which deliver required voltage. One of the simplest shown on the right: it charges capacitor when transistor is off, and use charge to deliver voltage over the rail. Unfotrunately this circuit annot be used with 100% duty cycle, as capacitor will discarge after some time, so you'll need periodically turn off transistor and on it again to recharge the capacitor.

I've had success with using the Vishay SI1040X-T1-GE3 to drive common cathode leds.

1
Black box on Arduino unsoldered itself due to overheating
1
What is the difference between MOSFETs and BJTs
1
RGB LED Strip - several question from newbie
4
Led strip dimming
1
Controlling individual LED strips of different kinds and lengths with a single microcontroller
3
Will a LED strip be less bright when I drive my mosfets with 3.3V instead of 5V?
3
MOSFET does not turn off totally
1
LED Controller + LED Panel with common cathode
1
Which of these is the correct wiring of an RGB light strip with n-channel MOSFET for Arduino