Pull Up and Pull Down Resistor Values [duplicate]

I usually use 10K Ohm resistors for pulling up or pulling down micro-controller lines. This is only because I have tons of them.

Recently while looking up pick and place surface mount information I found out that often times the number of types of components you have can play a part in the cost.

For example it might save money to change the 10K Ohm resistors to some other value already present on the board.

Given that, my question is; what factors are in play to determine appropriate ranges of resistance for pull up or pull down resistors?

This causes excess current draw when you want to "counter-act" the pull-up/pull-down. 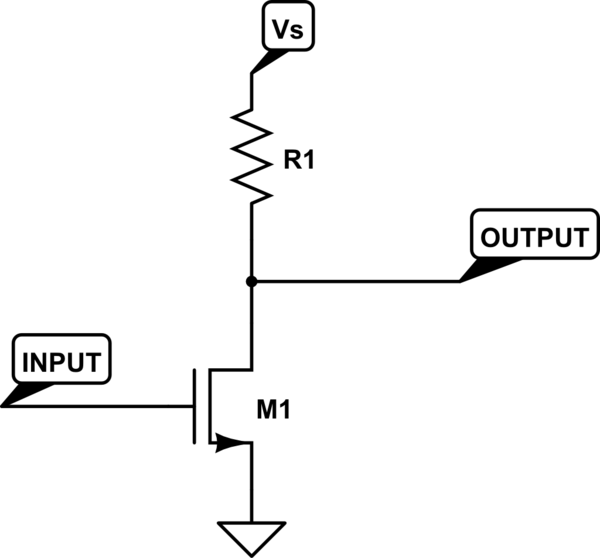 When M1 is "closed", you're effectively shorting output to ground. So the current flowing though R1 is:

Depending on what resistor power rating you have, limitations of Vs, and limitations of the switch M1 (doesn't have to be a MOSFET or even a transistor), you can figure out a lower resistance limit which will start to cause problems. You can do a similar calculation for pull-down resistors. When R1 gets way small (or the on resistance of the switch gets large), you start getting voltage-divider circuits so all of a sudden the output level isn't a digital signal anymore. You could use this to improve the lower limit value, but in reality there's usually no need to get anywhere near this lower limit.

Large pull-up resistors have will excessively limit the amount of current which can be provided to the output. There are a few consequences to this:

I can't really say how to account for the second point or other points in general, but let's take a look at the first point:

An RC circuit has a time constant of t=RC. If you have a signal line which relies on pull-up/pull-down resistors (I2C), the fastest signal rise time you can transmit is limited by this time constant.

Not the answer you're looking for? Browse other questions tagged resistors manufacturing pullup pulldown or ask your own question.

99
How do I calculate the required value for a pull-up resistor?