The question is a bit vague, but here goes.

Bandwidth is conventionally defined as the frequency at which the response of the system is reduced by 3dB (half the power) from whatever its maximum response is.

Most real devices, when operated open-loop, have a low-pass characteristic that causes their response to fall off with increasing frequency. They can have very high response at low frequencies, so their inherent bandwidth is relatively narrow.

If you use negative feedback to reduce the maximum response (closed-loop), then the frequency at which the response drops by half from that new maximum value (because of the device characteristics) is going to be higher.

Here is the open-loop bandwidth of a certain op-amp shown in red: - 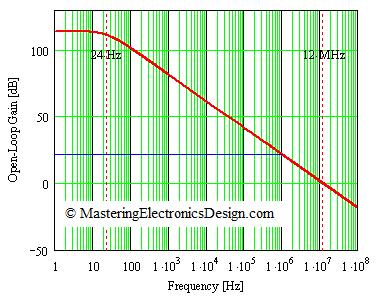 The blue line is when certain closed-loop components are applied to the op-amp.

Bandwidth is normally measured at the 3dB point of the frequency response and in the case of an op-amp (open-loop) this will be at 24Hz in the diagram.

If closed loop components were present, the gain would be reduced to (say) 20dB (blue line) but the bandwidth would increase to 1MHz.

The above example is for simple resistors "closing" the loop with negative feedback and the resulting bandwidth (3dB point) is always greater.

However, if an op-amp filter circuit was required that cut-off frequencies above 10Hz, the filter would have a bandwidth of 10Hz. In this example the closed-loop bandwidth is less than the open-loop bandwidth.

2
What is the closed-loop bandwidth of the INA143 at gain 0.1?
3
What does the bandwidth of a probe mean?
7
What is bandwidth?
5
Bandwidth of inverting and non-inverting op-amps
1
Ideal wireless channel (coherence time/bandwidth)
1
Big loop gain vs. big bandwidth
0
Gain-bandwidth product proof for open loop/closed loop opamp
0
What is meant by bandwidth here?
0
Acceptable overshoot, accuracy, and control bandwidth of a buck converter